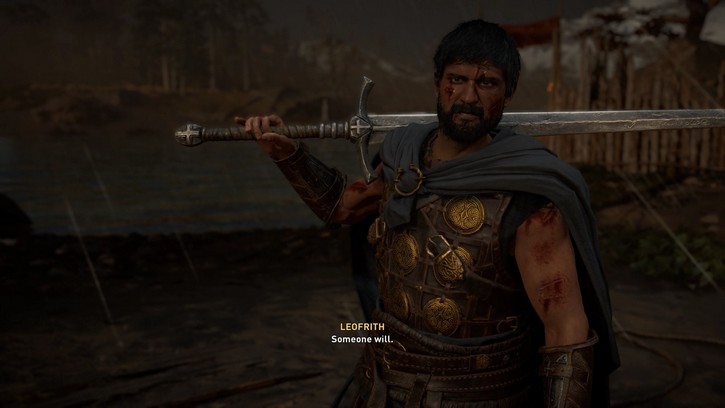 Leofrith is King Burgred’s most loyal general and he will come after you after learning that you have kidnapped the king.

This guide will show you how to defeat Leofrith and how your decision after the fight can affect your playthrough in AC Valhalla.

When Do You Fight Leofrith

You will fight Leofrith after delivering King Burgred to Ceolwulf. Leofrith will be after Ceolwulf’s son Ceolbert to have leverage against your alliance in exchange for King Burgred. Ceolwulf will ask you to look for Ceolbert and you will find them already engaging in battle with Leofrith toying with the boy. You will go to them and intervene that will lead to the fight against Leofrith, King Burgred’s most loyal general.

Tips and Tricks for Leofrith Fight

Leofrith has two weak points. The first is his hand and the other is his foot. Make sure to damage Leofrith first before using hitting these weak points with an arrow because sometimes, he will not get stunned. You can only stun him once and hit him with a finisher but it will already deal significant damage to his health pool.

Leofrith also has a stance where you see a blue rune icon show up near him. Do not attack him when you see this because he will parry it and hit you. Leofrith likes to do two normal attacks consecutively and you can parry them if you want.

Use your abilities frequently and shoot him with your bow when you are at a distance and you see the blue rune icon showing up. These will almost be like free hits for you and just dodge or roll after he runs to you. If you decide to attack him consecutively, he will be able to parry the second set of attacks or even interrupt you with a combo of his own.

If you feel like you are too weak yet to fight the boss, you should try doing other side quests first and level up. You can also check out our skills guide here to help you in future battles.

After defeating Leofrith, you will get to choose between sparing him or sending him to Valhalla. This decision will affect your playthrough but not in a big way.

If you choose to spare Leofrith, he will be disappointed because he wants an honorable death for losing to you. You will convince him that he is an honorable warrior and his time has not yet come because he was loyal to a king that betrayed his people. You will tell him that King Burgred has been exiled to Rome and Leofrith will follow or get his answer himself.

Leofrith will award you with information for your kindness. The information Leofrith will tell you is that he was ordered by King Burgred to write your name in a scroll where the zealots will hunt you down relentlessly throughout the game. He will also say that the zealots have not yet seen the scroll and you still have time to burn it before they get to read it.

These zealots are the strong roaming enemies you see on the map which are most likely to be way above your power level at this point.

If you choose to send Leofrith to Valhalla, he will just die an honorable death and Ceolbert will be disappointed with your decision. Eivor will tell him that this is how it goes and Leofrith earned it. You will not be able to loot anything from Leofrith which is why this option is kind of useless.

There are more quests out there that can change your playthrough and this one is just a small alteration. If you want to make it challenging and have the zealots chase after you, it is fine. You will deal with them anyway for the Hidden One’s Bureau. Increasing your charisma can give you more options on dialogues for other specific quests.