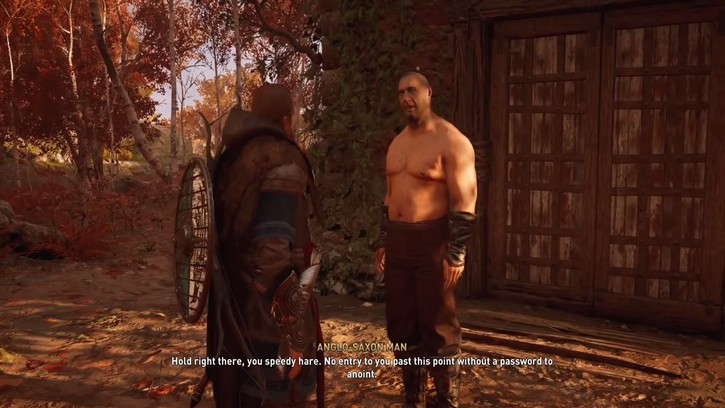 The BBB is an exclusive fight club and accessible as a side quest in Assassin’s Creed Valhalla. You will encounter a big but witty Anglo-Saxon man that will ask you for a passphrase to enter the BBB. This guide will teach you how to get into the BBB in AC Valhalla and also show how to beat each fight in the BBB.

Getting Into the BBB

To get into the BBB, which is an exclusive fight club in AC Valhalla, you find yourself talking to a rhyming Anglo-Saxon man that kind of looks like Drax from Guardians of the Galaxy. Once you have conversed with the Anglo-Saxon man, he will ask you for a passphrase before you can enter the BBB. The passphrase is “Naked fists and walleyed lisps”.

There will a note in the middle for you to read where the passphrase is written. Simple interact with it and go back to the Anglo-Saxon man to tell it to him. Do not forget to loot the chest beside the note where it contains coins and supplies. You can also use the Odin Sight from the top of the house if you cannot find it. The Odin Sight will pinpoint the location of the note if you are near the area.

The fights will be a brawl and if you are not built for it, you might find it hard to finish the side quest. You can reset your skill points freely if you want before entering the BBB. You can also check out our guide on the best skills to get here.

The Wall, Edward of Lincoln Fight

Once you have gained entry to the BBB, the Anglo-Saxon man will show you around the brawling area and you can start talking to him for the fight. Your first challenge will be against The Wall, Edward of Lincoln which will be an easy test of how good are you in combat. Edward of Lincoln is just a simple brawler that does not hit that hard. This is more like a warmup for the next fights to come.

The next fight will be against Tom o’Bedlam which can be annoying because it is just like fighting a drunkard out in the street. He is agile and unpredictable, and even uses his butt as an attack move. This will be another test on how well you can dodge attacks while hitting back. Try to fight smart at the start and wait until you get used to his moves and just smack him down every time he whiffs his attacks or has an opening.

The last fight will be against Thickskull which was the Anglo-Saxon man you conversed with from the start. This fight can be brutal and it might take you a few rounds to beat. Thickskull hits extremely hard and you might go down in just 1-2 hits from this big guy. You will need perfectly timed dodges throughout the fight and trickle his health down slowly as you play more safely against Thickskull. After you beat Thickskull, you will be invited to go back anytime to the BBB or the fight club. You will earn a skill point as a reward for this and this side quest is more on improving your combat ability, specifically dodging.

Side quests like these are often underwhelming in terms of rewards but it is part of the overall Assassin’s Creed Valhalla experience. These skill points will help you in the long run once you pile them up and it matters a lot once you get to through the more challenging storyline quests if you are doing all your side quests beforehand.