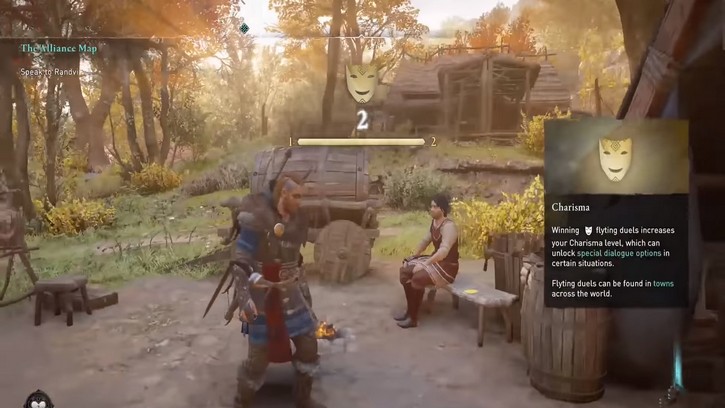 There is one unique way of how to increase charisma in AC Valhalla. These are done through doing flyting battles or basically, Viking rap battles with other NPCs.

The best way to win is by insulting your opponent while not deviating too far from the previous dialogue that was spoken. You also have to make these attempts rhyme to win.

These flying battles are also counted as a mystery and you can increase your level really fast if you complete all these. You can check out our article on how to level up fast guide here.

Quick Navigation show
Flyting Battles to Increase Charisma
What Does Charisma Do?
How Dialogues Affect Your Playthrough
Conclusion

Right at the start, you can already increase your charisma to level 2. This is by talking and interacting with an NPC named Alvis in your settlement. This gives you a preview of other flyting battles you are going to encounter throughout the game. The first level up to charisma is easy to get and you will get it immediately after your first flyting battle.

The next subsequent flyting battles will take longer to increase your charisma so make sure you find various NPCs offering a flyting battle. Some of them, like Jungulf, will even offer a wager on your flyting battle with him and you can earn as much as 200 coins when you beat him.

What Does Charisma Do?

Charisma adds more dialogue options through your interactions with almost all the NPCs in the game. This can either drastically change the outcome or save you a few coins when bartering for information and such.

How Dialogues Affect Your Playthrough

By unlocking better options on your dialogues, you can change the outcome of certain things and NPCs. For example, you will encounter an NPC named Tonna where you need to extract information from her. She will be willing to give the information for a fee and with better charisma, you can barter with her and offer half of what she was asking.

If you do not have enough coins with you, you will have to fight her and eventually kill her. By killing her, you already have changed your whole playthrough because you can recruit her to your settlement. You will encounter more dialogues with different outcomes and it is best to have as much charisma as possible so you can widen your options.

There is only one way of increasing your charisma in the game and it is important to find these flyting battles to have better options. This is also needed for getting the platinum trophy for AC Valhalla. For an easier playthrough, you can check out our best skills for Assassin’s Creed Valhalla here.