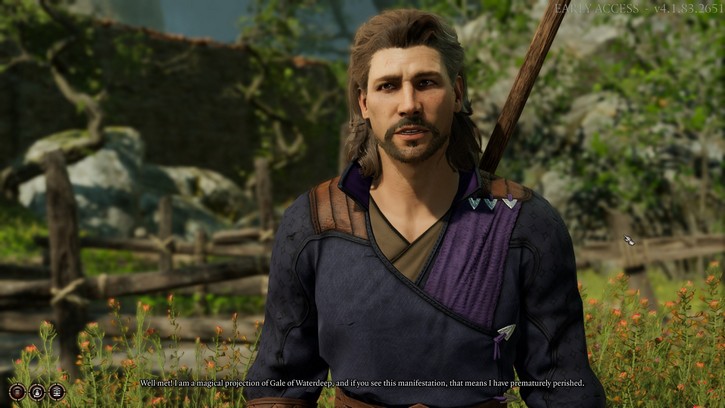 The Wizard of Waterdeep is Gale’s companion quest in Baldur’s Gate 3. You can immediately see it in the journal but you might find it hard to actually start the quest because there is a secret activation for it. This guide will talk about how to trigger the quest and how to finish it.

How to Unlock Gale

To unlock Gale, you need to finish the intro and leave the ship at the start of a playthrough. You will land near a shore and just head straight until you see a purple rune etched to a stone. This will prompt Gale to show up and interact with you. If you are playing as a wizard, he will say that you already have a wizard in the party but he will still be available in the camp.

To start and activate the quest, you need Gale to die. This is better done when there are no enemies around to interfere. Ungroup Gale from your party if he is already grouped up with you.

Simply use Gale and make him die. You can either make him jump over cliffs until he dies or use his own spells against him. Use the Grease spell on the floor where only Gale is standing and nobody else. Ignite it with the Fire Bolt spell and make Gale stand in fire.

All these spells are available from the start as a wizard. You might need to cycle through these spells twice. After getting downed, wait for Gale to die and his projection will show up instantly on his death. This will trigger an instant interaction with Gale’s projection. Listen to all of Gale’s humorous lines as he is the one with the eccentric personality among the companions.

His projection will instruct you specific and bizarre tasks and this will initiate the Wizards of the Waterdeep companion quest. Gale will tell you that there is a pouch hidden near his chest and you can see this in the inventory tab where Gale’s inventory will have a pouch. Take it the pouch and open it. This will trigger another interaction and choose to unthread the purple seam in a counter-clockwise fashion.

After playing the tune of “D-E-A-D” on the tiny flute, the magma mephit will appear and ask you you “I’ss k’cha t’chiss n’aga?” which asks for Gale’s name. The answer you should remember is “K’ha’ssji’trach’ash” which will prompt the magma mephit to give you the Scroll of True Resurrection.

This can be useful because saving a Scroll of True Resurrection is crucial for future fights because it resurrects the chosen character to full health.

However, you can see the Scroll of True Resurrection on your hotbar as long as you have the settings at default where picking up new consumable items will automatically put it in the hotbar for usage. Make sure to save the game before attempting just to be safe.