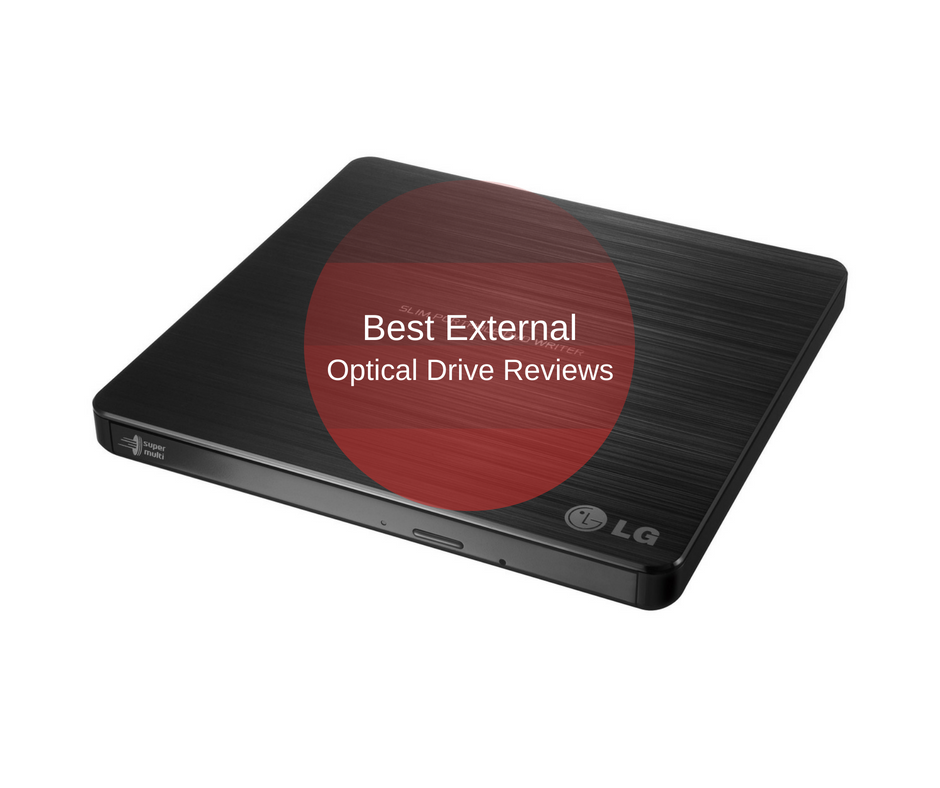 The tech industry has grown fascinated with creating thin, light, powerful computers in recent years. In order to achieve this, they have had to change ports to become thinner, switching from USB A connections to USB C connections, and have removed internal components from the system, such as integrated optical drives. This move has necessitated the creation of external optical disk drives, and we are going to look at some of the best external optical drive models in this post.

While most programs and videos that were stored on disks have become available digitally, there are still uses for the best optical drives. Burning disks for distribution, support of legacy software and hardware, viewing existing disks without having to pay to digitize them, and data backup storage, to name a few.

What to Look For When Looking Buying an External Optical Drive

Today there are a variety of disk drives to choose from, each having different features to offer. When considering which one to buy, there are a variety of features and capabilities to consider. Not every optical drive designed is for every operating system natively. Though drivers can be installed to make the most compatible with multiple operating systems. Depending on your willingness to get the optical drive to work properly with your computer, considering one based on compatibility may be important to you.

There are also different disk loading styles. Traditional optical disk drives utilize a tray that slides out of the device and lets the disk sit on it. Other designs allow the disk to be pushed through a front slot and loaded into the drive without having to deal with a tray.

Connectivity is a third aspect to consider. Modern gaming computers are transitioning to USB C and Thunderbolt 3. If you are not a fan of dongles or adapters, a native USB C drive might be a better option over USB A. Some drives also include dual USB cables to reduce the risk of power to draw out of the computer. This may be advantageous to some users who have experienced power draw issues. However, it may be a hindrance to users who utilize the limited number of ports on their devices.

One other important aspect to consider between the best external optical drive models is value for money. Many optical drives perform similar tasks that a user may need. Pricing for different features, designs, and capabilities naturally differentiate the models. Choosing a price is a balance between not going above what you can afford and getting a drive that fully suits your needs. Not every disk drive performs the same tasks or reads the same disks. You have to consider what your use case is for the drive you want to purchase. Above all, use case is the most important thing to consider. 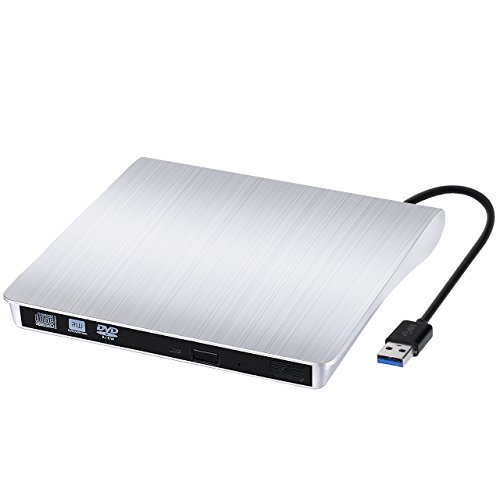 The VicTsing optical drive offers compatibility with both Windows and Mac computers. The drive is able to read DVDs and CDs, and is able to write CD data. Due to the simple nature of this drive, it can be plugged into a computer and be ready to go without needing to install drivers onto the computer first. This drive is USB 3.0 capable. It is also backward compatible with the older version of USB.

There is no need for a separate, external power source for this drive. It simply plugs and plays. It is widely compatible and aesthetically sound. Great for people on the go, who need the best external optical drive, with the portability to be exchanged between systems with ease. 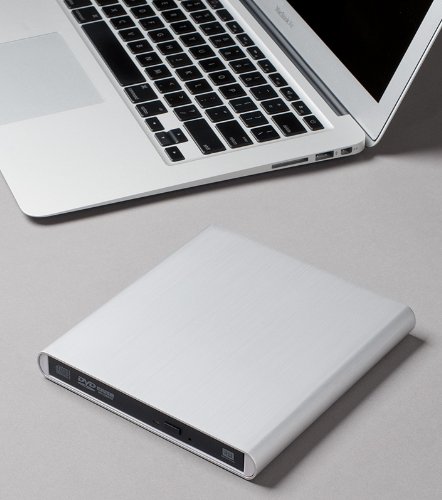 The Apple Superdrive does not utilize the traditional tray loading method, instead of relying on a slot-loading mechanism. This works by simply pushing the disk through the slot, and the drive automatically sucks in the disk to read it. It offers a compact, aluminum design for simplicity in design, increased durability, and increased portability. It utilizes a single USB cable for data and power, with a reduced risk of drawing too much power from a computer’s USB port.

The drive is designed with the Mac lineup in mind, though drivers exist to allow it to be used with Windows machines, requiring a little bit of technical knowledge to get it to work properly with this system. It is more expensive than other options with similar features, and only utilizes USB 2.0 transfer speeds, which is slower than the USB 3.0 connected drives. 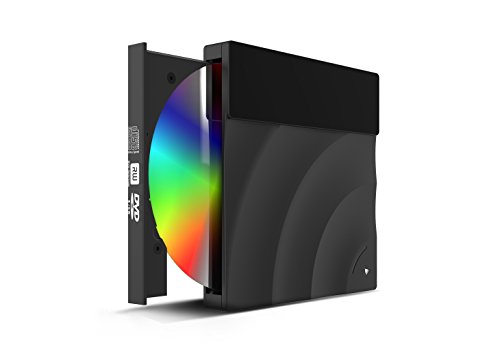 A good feature for this drive is its explicit inclusion of compatibility with the Linux operating system in addition to Windows and Mac. It offers some drop protection and error correction while reading disks, and offers a feature called touch control to make disk ejection easier. The Vaolin Drive supports reading and writing of data to both CDs and DVDs. It offers the basic functionality that most people would utilize, but is a bit more expensive than some of the other drives available. Also, it’s marginally larger than some of the other drives available, reducing portability.

The Vaolin Drive also connects via USB A, so devices with USB C will require an adapter to connect. Its use of a traditional tray increases risk of damage to the system. 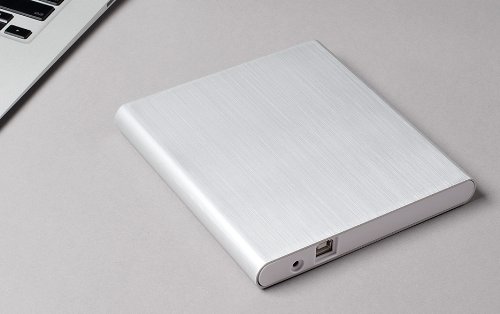 The Archgon SuperDrive is available in silver and black metal, providing a choice in style if you wish. It utilizes a tray-style loading mechanism. This naturally carries a risk of damage due to the extra component to stick out while on the go. For the features offered, the Archgon is a bit more expensive than other options. Though would be comparable to its USB A counterparts since the user base it is designed for needs a USB C connection on the drive.

The MCE Technologies SuperDrive is designed for compatibility with Macs. It is compatible with both USB A and USB C connections. This drive is unique in that it not only supports reading and writing to DVDs and CDs, but it can also read BluRays. It also comes with software compatible with this feature. Unfortunately, this doesn’t support 4K UHD disks, but most users likely have a collection of traditional BluRays that will work. It also will not write to BluRays, though this should also not be too much of an issue since many users will be writing to DVDs or CDs for compatibility.

As a result of being able to read BluRays, this drive is slightly larger. It’s also significantly more expensive than other disk drives available. To get the most value out of this drive, users should have several BluRays that they wish to use frequently. For just DVDs and CDs, other options offer those features at a lower cost. But this pricing is fair for having BluRays to watch. 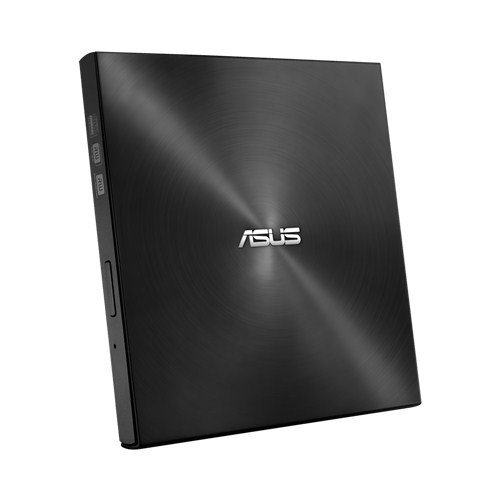 The Asus ZenDrive is designed to be thin and light for portability. It is compatible with DVDs and, a unique feature, M-Drives. The M-drive is designed to be a disk that can store data on it for at least 1,000 years. The drive is compatible with both Mac and Windows and is designed with the intention of being able to safely store data from these devices and Android to the M-drive disks or other form of DVD media. It is constructed of metal for durability.

Due to a focused purpose, this drive is not suitable for people looking to also utilize CDs with their system, and it is a bit more expensive of an option than other drives for DVD usage. For users who heavily utilize M-Disks, however, this drive is worth the extra cost, since none of the other drives on this list are compatible with them. 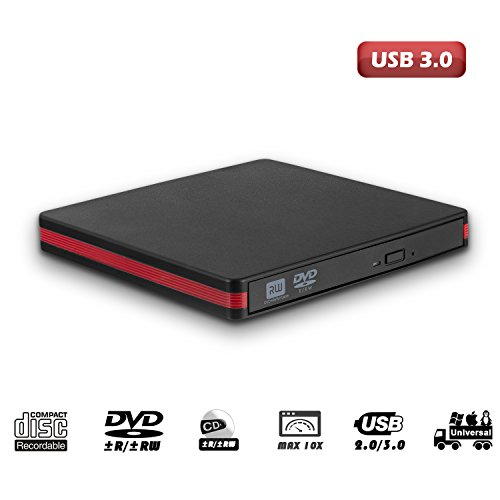 The MilluoTech drive is designed to be cross-compatible with Windows and Mac devices. This makes the drive available to many users. It is also the most economical of the drives on this list. It has a lot of features that some of the other drives offer. The MilluoTech Drive is capable of reading and writing information from/to CDs and DVDs. It also has a storage slot built-in for storing the attached USB cable. It is slightly bigger and heavier than other drives on this list, making it less ideal for transporting, but it is still a portable device.

This cable supports USB 3.0 so it will offer fast data write and read speeds. However, an adapter is required in order to connect with USB C devices. This drive can be used by a gaming computer without having to install external drivers. This simplifies the connection for the user. The drive uses a tray-loading mechanism that increases the risk of damage to parts, especially while on the go, and doesn’t offer some of the protections offered by other drives. 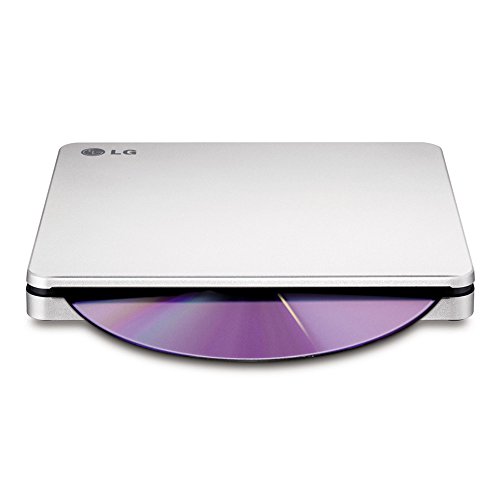 The LG SuperMulti Blade is a slot loaded external disk drive, meaning it doesn’t utilize a tray and reduces risk of damaging external components. This increases portability for the drive. Unfortunately, this portability aspect is slightly hurt by the larger form factor of the drive. Although it is light in weight for transporting, and should still be able to move.

Disk drives also make noise as they read disks since the components inside are rotating. This drive offers a unique feature for reducing this disk noise by utilizing a variable disk read speed. This adjusts based on the needs of the disk. There is a feature for automatic playback that doesn’t interfere with content playback on damaged disks. It does this by simply skipping over them to the okay regions of the disk.

The drive is compatible with Windows computers and Macs. It can also be connected to digital output devices such as gaming TVs and digital photo frames using the USB connection. This is USB A compatible and only supports USB 2.0, so this drive will require an adapter to connect to USB C. It will have slower data speeds compared to USB 3.0 compatible drives. It is also slightly more expensive than some of the other drives it competes with for similar features.