We have seen a notably growing number of video game projector use within the last few years following vast advancements in gaming technology. The use of projectors for video games has undoubtedly followed closely, mostly due to the small amount of space they can take up and the improved exhilaration of fast paced gaming displayed on a much larger screen. The importance of quality is an unwavering matter, especially if you are looking for a drastically larger screen size without having to give up the performance of your desired gaming console. A high quality projector can take your gaming to the next level. A bigger screen can be more exhilarating especially for split-screen gaming. For example, each player can have a screen portion that is larger than most standard sized televisions. This can come in handy when you want to game with a friend without taking up too much space.

All things considered, it seems reasonable to assume that combing through the market for the best gaming projectors can be a daunting task. Especially if you aren’t sure what some of the terminology actually means or exactly what you are looking for. Therefore, we have put together a comprehensive comparison guide to help you find the perfect video gaming projector that fits all of your needs.

Things to Consider When Choosing a Gaming Projector

• Consider the frequent location of your video game playing when deciding on which projector model works for you.

• Ensure that the power supply provided is convenient for you and your gaming needs.

• Check the specifications to be sure that the input options are compatible with your gaming devices. 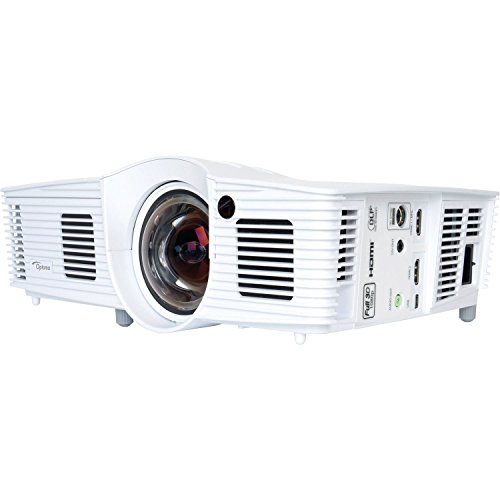 With a solid reputation of being one of the best gaming projector available, this impressive model includes an enhanced gaming mode that enables phenomenal performance when playing video games. An astounding 28,000 to 1 contrast ratio provides exceptional black levels in Horror and first-person shooter games.

With features such as the compelling DarbeeVision processor and a screen size of up to 303.2 inches, this powerhouse is ideal for gaming. However, there may be a latency of up to 16 milliseconds. This may be not be a big concern as its actually a very small delay compared to other projectors used for gaming. 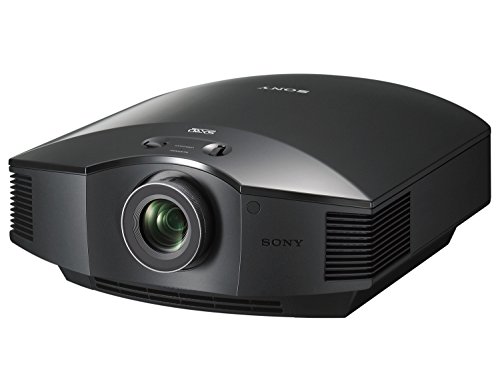 The Motionflow technology provided by the Sony VPLHW45ES projector offers smooth action by creating and inserting extra frames between the original frames. Connect your console via HDMI and heighten your gaming experience with a screen of up to 162 inches.

This model is powered by a 215 watt high pressure lamp for up to 6,000 hours of watch or play time, which is slightly on the lower scale of longevity for gaming projectors. Purchasing a backup bulb is recommended and could be this projector’s only minor downfall. 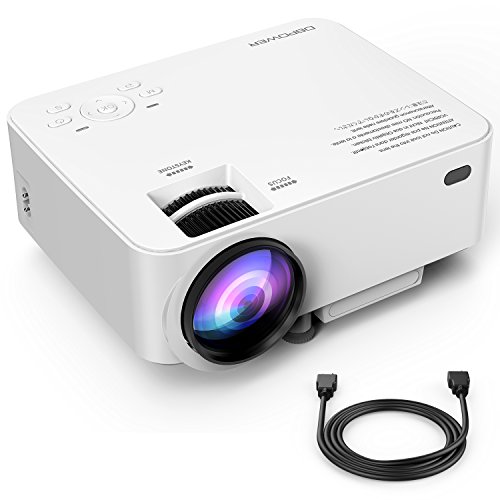 The DBPOWER Mini Projector is whisper quiet and weighs in at just eight ounces. Nonetheless, it can pack a powerful punch. Compatible with nearly every game console, this projector is compact and perfect for the traveling gamer. Consider this to be one of the best gaming projectors for gamers on the move.

The supported resolution for this miniature model is an astounding 1920×1080 pixels. Although small, this projector’s high performance is dependable and efficient. Its built-in cooling system disperses the heat evenly to ensure long lasting and upscale game play.

Lumens are the total quantity of visible light emitted by projectors. Most mini projectors have between 1,600 and 1,700 lumens; this model delivers 1,800, providing impressive clear game play, contrary to its size. 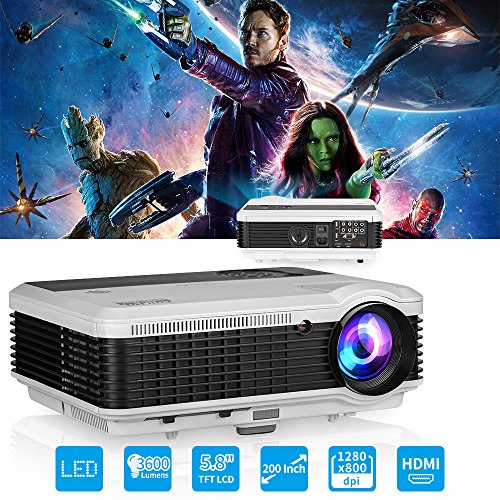 This projector’s lamp delivers 50,000 hours of game play. The ultra soft LED light source projects diffused images, easing strain on your eyes in the event of long hours of gaming. The high speed magnetic levitating cooling fans prevents any overheating so you can play without having to worry about malfunctions or damage.

What makes this model stand out is its lens; five pieces of Lanthanide glass is used to reduce any glare, giving you one of the sharpest images available. This is the exact same glass used in searchlights, sports’ stadiums and streetlights. Therefore, we believe its safe to say, you can expect brilliant images from the EUG X88+ projector.

Gameplay can be projected on a screen of up to 200 inches, using 3,600 lumens. This makes the EUG X88+ a fan favorite. The dual USB and HDMI ports gives gamers the option to connect various game consoles at their convenience without compromising too much space.

Another standout feature of this gaming projector is that it can easily be paired to a Bluetooth speaker. However, a Bluetooth transmitter is needed. It isn’t included but it can be bought and quickly connected. A lot of gaming projectors do not have this option so its a nice feature that stands out and truly makes this model one of a kind.

This projector carried high-fidelity stereo speakers, giving its user one of the highest quality audio options for the ultimate gaming experience. Coupled with a unique built-in amplifier chip and SRS sound, a 3D audio processing technology, the LESHP home theater projector is guaranteed to please the avid gamer.

Projecting a screen size of up to 220 inches, this projector is sure to enhance the quality of your gaming. This model has a glorious resolution of 1280×800 pixels and a lamp life of over 30,000 hours.

The LESHP Home Theater projector has a 20 percent brighter image than ordinary LED projectors due to its 3,200 lumens. It also wields a keystone function which allows you to manually adjust picture proportion in the event of the mini projector being placed on a tilt. Furthermore, the lack of latency and delayed response makes this projector an ideal gaming companion.

The only drawback to this model is that it is not wireless. Above all, this is another powerhouse projector not to be underestimated. 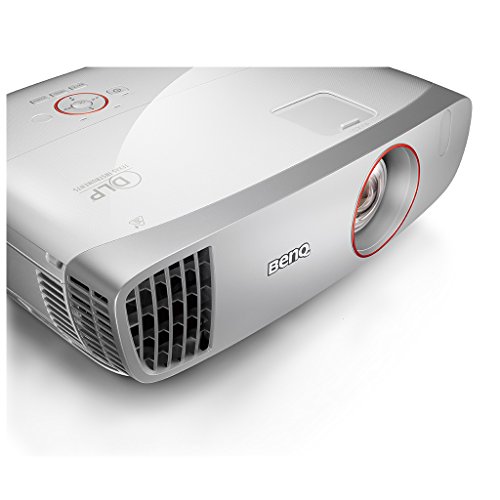 Projecting an HD, 100 inch screen through its short throw lens, this projector was made with gamers in mind. Thanks to its unique lens, its able to project a large screen from only a few feet away. This allows the gamer to set up this model in a normal sized bedroom and play from behind the device without interfering with quality, resolution, latency or power.

Although this is not considered a miniature projector, it only weighs in at 7.93 pounds, which is definitely on the smaller scale of similar projectors in its class. With 2,200 lumens being used to power this model, crisp images are displayed with lifelike colors.

In addition, this projector does have a few minor setbacks. Customers have said that the cooing fan is a little on the loud side. Also, there are no vents on the top or bottom which limits the airflow and could dramatically decrease the longevity of the BenQ HT2150ST projector. 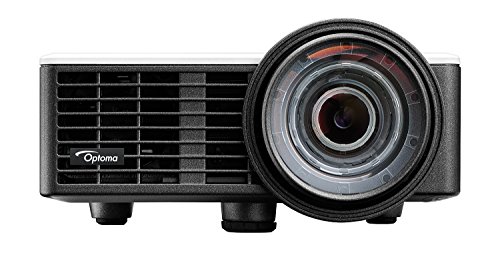 This palm sized model weighs just a single pound, making it portable and compact. The powerful short throw lens benefits gamers by allowing a smaller distance from projector to wall without taking away the quality of resolution. The unique function that this projector features is its automatic keystone. This allows the image projected to be less distorted while tilted.

One setback is the 700 lumens, which means the light projected is not as bright as many other projectors. Its recommended to use the Optima GT750ST in a dark room for the best performance. The other is the loud cooling fan. However, the fan is only audible while the projector is in Bright and PC modes. It seems to be drastically quieter while the projector is in Eco mode but the output becomes much dimmer. 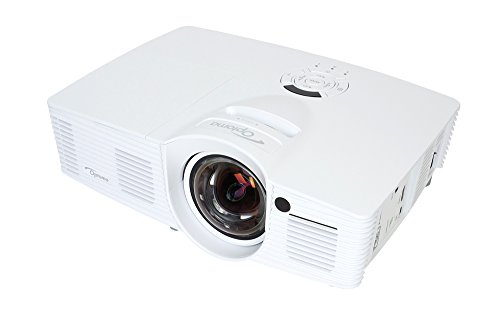 A built-in 10 watt speaker paired with a VESA 3D sync port allows the user to plunge themselves right into their favorite video games. This lightweight model isn’t considered a miniature projector but it can still be compact and portable, if needed.

The Optomoa GT1080 projector includes two HDMI ports and is MHL compatible if you’d like to connect smartphones and tablets. The MHL adapter is not included, however. This model is another small powerhouse made with video gaming in mind.

You can expect to enjoy resolutions of 1080 pixels with this miniature projector. It offers vibrant colors for astounding realistic graphics. This model has a built-in two watt speaker with a sub woofer. For those who expect loud and clear audio to enhance the cinematic aspect of video gaming, this projector would be the one for you.

The GoooDee Mini projector supports HDMI, VGA, USB, AV and SD cards. That makes this one of the most versatile mini projectors on the market today.

However, overheating seems to be an ongoing issue with this model. Its recommended to be turned off and allowed to rest every three to four hours to prevent any damage or malfunctions. This may be an inconvenience for some video game players but if that doesn’t concern you too much, this mini projector would fit right in your gaming arsenal.