For the average computer user, it’s easy to assume that all keyboards are made equal. For the most part, this is true: For the last few decades, the majority of keyboards pumped out of the major manufacturers have been “monoblock” keyboards. If you’ve used a keyboard in an office setting, it’s a given you’ve used this type of keyboard: Rather than use an individual sensor for each key, a “monoblock” keyboard uses a keyboard-wide electrical circuit to know when you’re pressing a key.

What Are Mechanical Keyboards?

Mechanical keyboards are as old as the home computer itself, first coming to popularity in the early- to mid-’70s. A mechanical keyboard is, in many ways, similar to a typewriter: Individual sensors recognized each keypress, with a satisfying “clack” or “click” sound letting you know that you fully pressed the key. However, using a sensor for each key was cost-prohibitive and, in an effort to reduce the price of the keyboard by a substantial amount, manufacturers switched to the “monoblock” electrical system along with printed on keys. As a result, the cost of keyboards decreased by a considerable amount, with new keyboards often sinking to the $10 and under range.

However, these “monoblock” keyboards sacrificed price for reliability; while they were considerably cheaper than the old mechanical keyboards, they often broke down quicker and were less responsive. Thanks to recent advancements in technology and customers yearning for a high-quality keyboard, mechanical keyboards have started to make a comeback at an affordable price.

Why Use a Mechanical Keyboard?

First, we’ll tackle the elephant in the room: cost. While mechanical keyboards are significantly most expensive than their mass-produced “monoblock” counterparts, this high cost ensures you’re getting a high-quality product that will stand the test of time. Unlike your standard keyboard, which is designed to be easily replaceable, mechanical keyboards are built to endure a significant number of keypresses. When your fellow gamers are on their sixth or seventh standard keyboard, there is a significantly high chance that your mechanical keyboard will still look good as new, no matter how rough you are on it.

Earlier, we mentioned that mechanical keyboards are a necessity for programmers, and this is due to one reason: fewer typos. In fact, anyone who uses a computer at all can likely benefit from fewer mistakes, whether it’s in a Skype chat with a friend or writing an important business email. Just how does a mechanical keyboard lessen typos when compared to a standard keyboard? Due to the tactile feeling you get from pushing in the key on a mechanical keyboard, it’s far less likely that you’ll press a key twice.

Also, since mechanical keyboards require more pressure to push a key fully in, you won’t make mistakes accidentally by sliding your hands over unwanted keys. On average, most computer users don’t even realize they’ve made a typo on a standard “monoblock” keyboard because there is no feedback on the individual keys. A mechanical keyboard gives you both a tactile sensation along with that satisfying “clack” sound when you’ve fully pushed in each key.

Lastly, some users will find that they just enjoy the heft and feel of a mechanical keyboard. These keyboards are usually heavier than their standard counterparts, meaning you won’t need to worry about your keyboard sliding around on your desk as you type. Some users even find they love the noises a mechanical keyboard makes, especially older users who are nostalgic to how keyboards sounded in the good old days.

Having a large gap means that after pressing a key, you must wait for a significant amount of time before pressing the key again; in other words, keyboards with hysteresis prevent you from rapidly tapping keys, making double-taps almost impossible. In games where rapidly pressing a key is essential to gameplay, such as with Tomb Raider’s quick time events, hysteresis can prevent you from successfully completing those events. If you’re looking for a gaming mechanical keyboard, make sure you get one with absolutely no hysteresis.

Some of the Most Common Mechanical Switches

Cherry MX Black
This mechanical switch registers a keystroke when pressed halfway in and releasing the key once it is fully depressed. Gamers will love this because it makes double tapping a key simple while making it tough to push the wrong key accidentally. However, non-gamers may find this keyboard strenuous to use when typing, because you must fully press in every single key as you type. Cherry MX Black switches are one of the few mechanical keyboard switches where hysteresis is not a concern, which is why this kind of switch is so popular among gamers.

What to Look for When Buying a Gaming Mechanical Keyboard

To help you get started on choosing the perfect gaming mechanical keyboard, we’ve highlighted 11 of the best models in four categories.

Top of the Range and Best Mechanical Keyboards 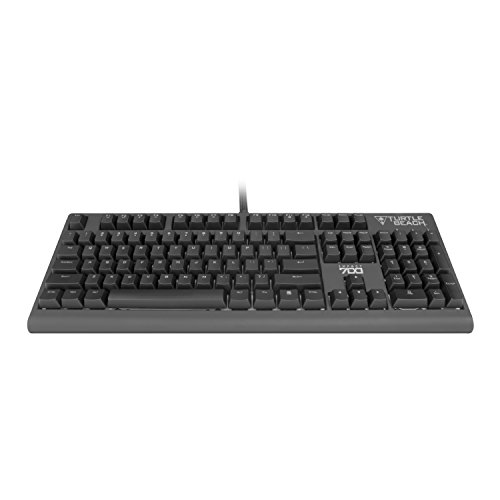 The Turtle Beach Impact 700 Premium Mechanical Gaming Keyboard is a full-size keyboard with laser engraved letters to ensure that even after years of use, the letters on your keyboard don’t fade or chip away. To further increase the stability of this mechanical keyboard, Turtle Beach uses a steel reinforced chassis with gunmetal keycap plates; not only will this keep your keyboard in perfect condition over the years but it also helps provide brighter illumination for the backlight.

If you’re into the MOBA genre of games, you’ll love the Cherry MX Brown switches on the Turtle Beach Impact 700 Premium Mechanical Gaming Keyboard, letting you quickly tap keys in rapid succession. With USB and audio ports directly on the keyboard, you can plug everything you’ll need for your gaming session directly into it! 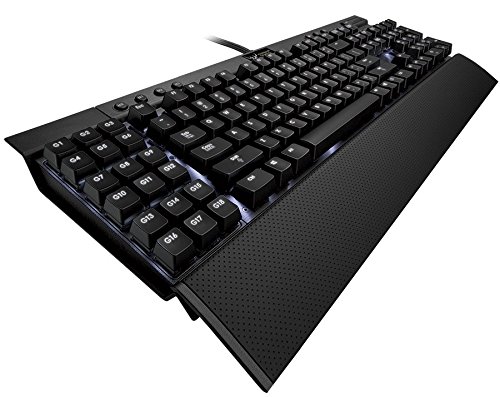 Fans of first-person shooters will love the Cherry MX Red switches found in the Corsair Gaming K95 Mechanical Keyboard. You’ll find that your skills are elevated to the next level with this gaming mechanical keyboard thanks to the smooth response of the keys, letting you double- and triple-tap any key quickly. This keyboard is also fully customizable, allowing you to customize not only some of its keys but also customize the backlight.

The brushed aluminum chassis on this keyboard not only looks good but it also increases this keyboard’s durability beyond that of a regular mechanical keyboard. Corsair has built a keyboard so rugged, nothing will damage it short of a nuclear apocalypse! To help facilitate hours of gaming, the Corsair Gaming K95 Mechanical Keyboard has a detachable full-length wrist rest that is incredibly soft; it’s almost like placing your wrists on a cloud. 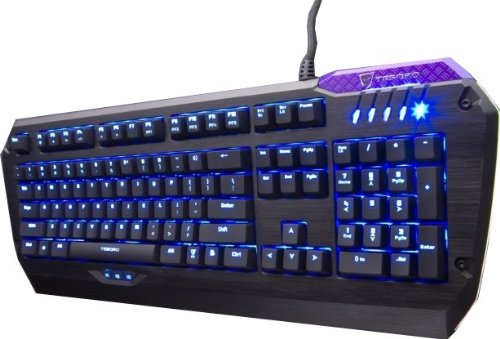 This gaming mechanical keyboard is an excellent choice for retro gamers as well, as its compatible with Windows operating systems as far back as Windows XP.

If you’re looking for a high-quality, mid-range gaming mechanical keyboard, then look no further than the CM Storm QuickFire TK Compact Mechanical Gaming Keyboard. Need to press four or five keys at one time? No problem! Thanks to the N-Key Roll Over in USB mode, even the craziest of key combinations will register on this keyboard. Thanks to this keyboard’s adjustable LED backlight, your keys are fully visible even during an all-night gaming marathon.

Where the CM Storm QuickFire TK Compact Mechanical Gaming Keyboard stands out from the pack is with its unique NumPad block design, merging both the navigation and command keys into one easy-to-use combination. Unlike other gaming mechanical keyboards, the CM Storm prides itself on being lightweight while still maintaining a high degree of durability. 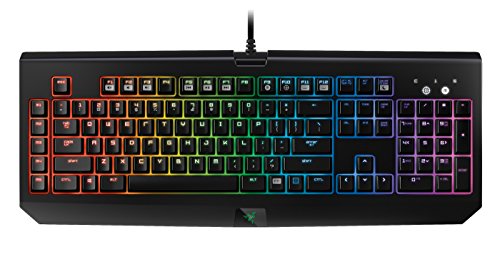 Razer is known for their high-quality gaming mechanical keyboards in every price range, and the Razer BlackWidow Chroma Clicky Mechanical Gaming Keyboard is no exception. This gaming mechanical keyboard features everything you’d expect from a Razer product, such as programmable keys, media keys, anti-ghosting technology and extreme durability. Where the Razer BlackWidow Chroma stands out from even other Razer products is in two areas: its keys and its backlight.

The Razer Blackwidow Chroma gaming mechanical keyboard gets its name from the chroma backlight pattern. While most gaming keyboards only have solid color backlights, this Razer keyboard can display the entire spectrum of colors all at once. With 16.8 million color options to choose from, you’ll never see the same pattern of colors twice.

While most gaming mechanical keyboards use Cherry MX switches, Razer instead opts for their own proprietary Razer mechanical switches. Not only do these switches provide a very audible “click” sound when pressed, but they also don’t suffer from hysteresis and are incredibly responsive and durable. When designing this keyboard, Razer had gamers in mind throughout the entire design process, which definitely shows in the end result. 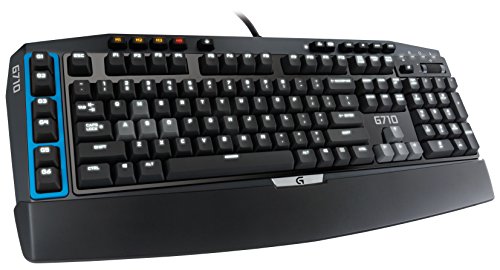 It wouldn’t be a proper list of gaming accessories if there weren’t a Logitech product on it. For decades, Logitech has provided high-quality computer accessories built specifically for gamers, with one of their latest being the Logitech G710 Blue Mechanical Gaming Keyboard.

What makes this keyboard stand out from the crowd? Not only does it offer Cherry MX Blue mechanical switches but it also includes adjustable backlighting and six programmable keys. Not only is this gaming mechanical keyboard compatible with almost every Microsoft Windows iteration, including operating systems as old as Windows Vista and as recent as Windows 10, but this keyboard is also compatible with Macs as well.

Just because the Razer BlackWidow Ultimate 2014 Elite Mechanical Gaming Keyboard is a few years old doesn’t mean it’s still not among the best. If you’re a gamer on a budget and don’t mind missing out on a few new features, this Razer keyboard makes for an excellent entry-level gaming mechanical keyboard.

The Razer BlackWidow Ultimate 2014 Elite Mechanical Gaming Keyboard has all of the features you’d expect from a Razer keyboard, including:

These features are only the tip of the iceberg; if you’re looking to save some bucks but refuse to skimp on quality, this is the mechanical keyboard for you. 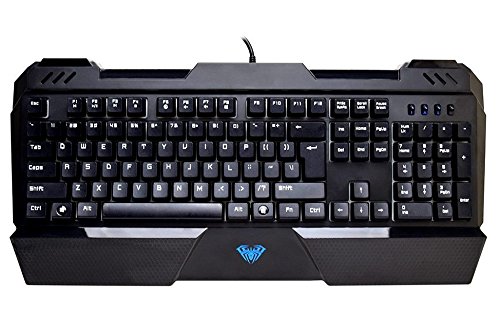 The AULA Sapphire Mechanical Keyboard is built for comfort, featuring a palm rest designed specifically to combat wrist strain and fatigue. The mechanical switches found within this keyboard are proprietary AULA switches, which the company claims are “perfect for all gamers” by offering a tactile, responsive feel. Not only does this keyboard work with Windows 10 but it’s also fully compatible with Mac operating systems as well! 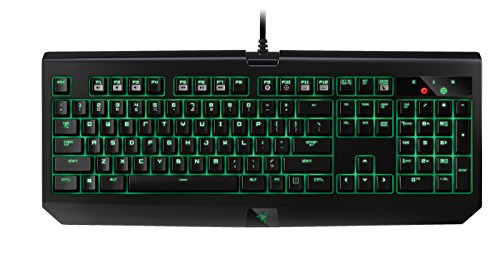 Quiet keys aren’t all this gaming mechanical keyboard has going for it, as it also features backlit, fully programmable keys, USB slots, media keys and anti-ghosting technology. Not only that, but the Razer BlackWidow Ultimate Stealth 2016 mechanical keyboard is extremely durable and is rated up to 80 million keystrokes. This mechanical keyboard is so beloved by gamers that you’ll often see it used by professional players around the globe! 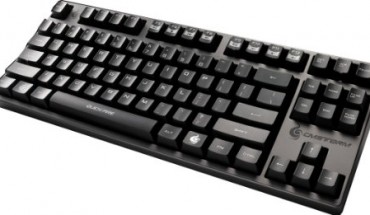 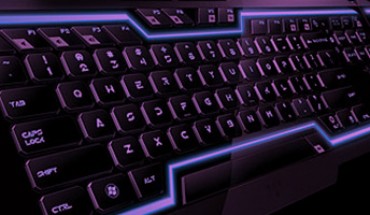 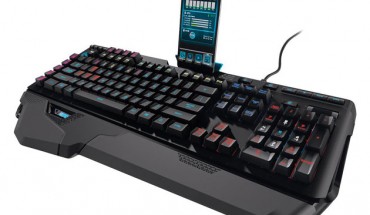