Welcome back for the fourth segment in our series on building your own gaming PC. In the previous segments, we’ve taken a look at determining your requirements and setting a budget, choosing key components such as a CPU and motherboard, and choosing other components such as a graphics card, hard drive, and power supply. This time, we’re going to discuss the steps necessary to actually assemble your machine safely and getting it up and running.

Step One: Preparing your workspace

The first step in assembling your new computer is readying your workspace. This is a step which is often hurried through by first time builders due to the excitement of wanting to get the machine up and running NOW. However, by taking the time and effort to make sure your assembly area is setup properly and safely will save you headaches later on.

Obviously the first thing you’ll need to consider is the space itself. You’re going to want somewhere that minimizes your risk of damaging any of your new components, which means we want an area that avoids damage from falling, electric / static shock, and liquid. If at all possible avoid assembling or working on the insides of your computer in a room with carpeted floors. Carpeting will dramatically increase the risk of electrostatic discharge which could destroy one or more components.

You’ll want an assembly area that is large enough and sturdy enough to handle your case on its side, the components you’re currently using, any instructions you want to refer to, as well as a grounded power strip or uninterruptable power supply and your monitor. Ideally this surface will be at a height that is comfortable for you to work on. Often this will be a large desk, workbench, or even a kitchen table. If you have access to one, make sure to line your work area with a properly grounded electrostatic mat. Assuming you do not, there are some simple household objects that can help minimize your risk of static such as rubber-backed placemats or even a simple plastic tablecloth.

Plastics are insulators, so they can reduce the chance of static discharge. Wearing rubber-soled shoes also helps. Additionally, wearing and properly using an electrostatic wrist strap will minimize the risk of static shock.

Once you’ve prepared your work surface, you’ll want to make sure that all of the tools and other supplies you will need are within reach. In addition to the wrist strap mentioned above, you will definitely need one or more Philips head screwdrivers, cable ties, some snips, as well as any tools that may have come packaged with any of the components you purchased (like a processor insertion tray, or an adapter for easy installation of stand-offs). We’ve also found it nice to have something to keep all of those little screws in so they don’t roll away during assembly. While magnetic screw trays are nice, a simple glass or plastic dish will do.

While this may seem like common sense, but remember to keep any and all liquids away from your components. If you absolutely need to get something to drink, keep it in another room and make sure your hands are dry before touching circuit boards.

The idea of assembling some of the components outside of the case may seem a little strange, but is actually grounded in my experience working as a repair technician. It is incredibly frustrating to assemble an entire machine inside a case and beautifully manage your cables for a wonderful balance of aesthetics and airflow, only to have the machine not boot up properly and then have to disassemble the unit to figure out what component is at fault. Sometimes components are D.O.A. (dead on arrival), or sometimes they’re not seated correctly, or any number of other potential issues arise. The point is, by adding this step, we are ensuring that several key components (processor, motherboard, RAM, and power supply) are all in working order.

This step requires the following components: processor, heatsink and CPU fan, motherboard, RAM, power supply, mouse, keyboard, monitor, and your graphics card if your CPU doesn’t have integrated graphics. You’ll also need the power cables for your power supply and monitor, whichever cable you intend to connect your computer to your monitor with (HDMI, DisplayPort, DVI, VGA), and your anti-static wristband. Finally, you’ll want the empty motherboard box and the large anti-static bag that your motherboard was in. Using some painters’ tape, line the outside lid of the motherboard box with the large anti-static bag. This will create an anti-static surface that we’re going to use in this step.

First, ground yourself by attaching the alligator clip end of your anti-static wristband to an appropriate surface like the metal supports on your case. Then, holding the motherboard by its sides, place it on top of the anti-static bag topped motherboard box with the rear panel hanging off slightly (in case we need to install a graphics card). Next, we are carefully going to install the processor but this process varies depending on whether or not you bought an Intel or AMD chip. We will also provide links to instructional videos on YouTube as visual guides.

If you have an Intel LGA2066 CPU watch this video instead.

MSI– How to install AMD AM4 CPU

If you have an AMD TM4 CPU watch this video instead, which includes unboxing the Threadripper.

Now that your processor and its cooling unit are installed on the motherboard, it is time to install the system’s memory. It is fairly straightforward, as the sticks are designed to only be inserted in a specific orientation. It is important to consult your motherboard’s operating manual to see what DIMM slots to install the memory into especially if you are using two or more sticks of RAM. This is usually pairs of slots such as 1 and 3 together or slots 2 and 4 together.

If your CPU doesn’t have integrated graphics, we’ll need to install a graphics card on the motherboard in order to be able to run our POST test. However, if you do have integrated graphics, please skip ahead to Hooking up the power supply. In the video, they’re installing the card inside a case, but as we’re not in the case yet we can skip the case-related steps for now.

If your motherboard has a power button or switch directly on the board go ahead and turn it on. If your board does not have a power button or switch, we’ll have to manually turn it on using the tip of a screwdriver and two jumpers on the motherboard. The lower right corner of your motherboard will have a section of 9-pins that connect to the front panel. By touching your screwdriver to the proper pins, you’ll jumpstart your computer without a power switch. There should be a row of four pins and a row of five pins. We want the last two pins on the row of four (labeled pins 6 and 8 on the picture from Intel below.) Touch the tip of your screwdriver to pins 6 and 8 without touching any others. This should turn on the machine.

If all goes well, your components should go through a process called Power On Self Test, or POST. You’ll know this has completed successfully if the monitor starts to show the boot process and eventually ends up in the system BIOS. If this did not complete successfully this indicates either the components were not installed properly or that one or more of them is faulty. If you have a debug LED on the motherboard, consult your manual to determine the exact nature of the error.

Step Three: Assembly inside the case

Once we’ve successfully had the machine POST, we can turn off the power and unhook any external cables and peripherals (power cord, keyboard, mouse, etc). Next, unplug the internal power cables from the motherboard (and graphics card). If you have a graphics card installed, reverse the steps above and remove the card now. Once these steps are completed, we’re ready to install the components inside the case.

For now, the only cables we should have plugged in are attached to the CPU fan or chassis fans. You shouldn’t have any power or data cables installed yet, as we’ll get more into that below.

The final parts of the assembly is to run the cables between components: from the PSU to other parts, from the HDD/SSD to the motherboard, and so on. This merits its own section because of the importance of cable management. When done well, your cables will not only connect each component necessary but they will also look pleasing and only minimally interfere with airflow. When done poorly, it can look like a rat’s nest which can collect dust and cause your unit to suffer from unnecessary heat.

Next, run the front panel cables from the case through the lower management hole and plug them into the motherboard according to the instructions provided with your board. Finally, when all cables are properly routed you can bundle them and loosely strap them together with cable ties or Velcro straps. Snip away any excess cable tie once secured, so that they don’t get caught up in a fan.

With your components installed inside the case, and your cables nicely managed, its time to get the computer up and running and loaded with software and games. We hope you enjoyed part 4 of this guide on building your own gaming PC, and invite you to join us for part 5: Software, troubleshooting, and other helpful links.

The Build Your Own Gaming PC Series:

Build Your Own Gaming PC – Part One

See The Best Components For Your PC Build Here: 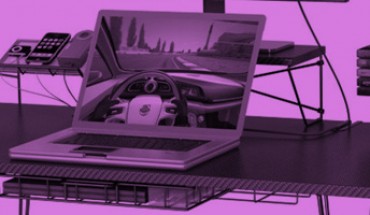