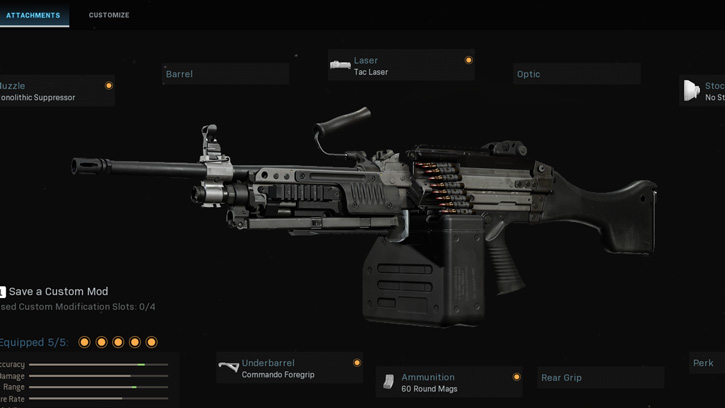 The Bruen MK9 is a tough LMG to unlock but once you’ve got your hands on it – and you’ve got the right attachments to go with it – it’s an absolute beast.

Whilst this gun has some potential in multiplayer game modes, there’s no doubt that it shines the brightest in Warzone.

The gun has manageable recoil and deals incredible damage even at long ranges. Combine this with its 100-bullet clip and you have a weapon capable of tearing apart entire teams – but again, you need to make sure you’ve got the right attachments on your Bruen MK9 for this to happen.

In this post, we’re going to walk you through the best Bruen MK9 loadout options for Warzone – attachments, secondary weapons to pair with it, perks, tactical and lethal equipment.

This Bruen loadout has been designed to be the best option in as many situations as possible.

The VLK 3.0x Optic pairs nicely with the gun’s ability to deal high damage at range. Your LMG will almost be sniper-like with this optic, allowing you to gun people down from distance. The XRK Summit 26.8″ barrel only adds to this further.

Whilst some people recommending using the 60-round ammunition, we don’t really like that option – you may as well use the Grau if you want a 60-round gun that’s decent at both close and long range.

Because we think you should stick with the default 100-round ammunition, pair it with Sleight of Hand for faster reloading (the 60-round clip reloads much faster than the 100) and the Tac Laser for increased mobility; faster aim-down-sight and improved hipfire accuracy. These attachments will allow you to still be mobile enough in close-quarters action.

The Bruen MK9 Loadout is finished off with a Monolithic Suppressor to ensure you remain hidden on enemy radars when you’re firing.

This depends on the stage of the game that you’re in and your own game style.

If you’re using Ghost, you’ll probably want to pair this up with a Renetti pistol that has the Mk3 Burst Mod attachment for triple-burst fire. This gun will give you a flexible option if you’re reloading your Bruen.

If you’re using Overkill, you’ll want to pair this up with an SMG. The MP5 is the most predominantly used submachine gun, though you could realistically pair the Bruen with a Fennec, using 40-round mags, too.

Perk 1: EOD. Explosives are a huge killer in Warzone, whether that’s RPGs, C4s or sneaky proximity mines hidden within large hoards of loot. We think EOD is worth choosing over Cold Blooded, especially as thermal scopes aren’t overly popular or even massively useful in the land of Verdansk.

Perk 3: Choose between Shrapnel for an extra piece of lethal equipment, Battle Hardened to reduce the strength of enemy stuns and flashes, or Tracker to see enemy footprints. One out of these three will be the best and will come down to personal preference. Our preference is Tracker.

Heartbeat sensors are incredibly overpowered in the early and middle stages of games, so that would be our recommendation right the way through to the end game – i.e. after the Gulag has closed.

If you’re bringing in a late-game loadout, consider stun grenades instead as many enemies will have Ghost to stay hidden on heartbeats.

C4s are incredibly powerful and useful in many situations. We always advise using C4s unless you prefer to camp. If camping is your thing, go for proximity mines as they are a little stealthier than claymores.