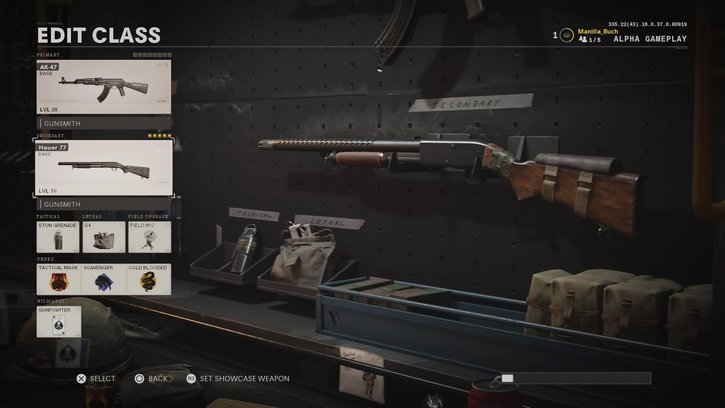 If you are the type of player that really enjoys to run around the map and one pump opponents before they even have the chance to react, then this blog is for you.

Essentially, what we are going to show you is a pretty overpowered shotgun loadout in Call of Duty Cold War that I recently discovered. Having played with it a couple of games, it is not only really fun to play with, but also very rewarding, especially in smaller maps where space is tight.

As a primary weapon, you can choose pretty much whatever gun you want. We do recommend that you either go for a XM4 loadout or an AK-47 loadout purely because those two are extremely powerful alternative weapons in case you need to deal some long-range fire. However, if you are more of a burst type of player, check out our overpowered M16 class loadout. On top of that, you can also be slightly different and run a sniper/shotgun loadout. In that case, feel free to check out our amazing quickscoping loadout guide.

First, let’s clear the air as to why we have gone with the Hauer 77 as compared to the Gallo SA12. As we mentioned above, we are going for a powerful ‘run and shoot’ type class. The Hauer 77 has the capacity to eliminate opponents with a single bullet in close range, which makes it extremely powerful provided it is built with the correct attachments and perks.

Best Attachments for the Hauer 77 Shotgun

Now, for those that care, let’s take a closer look at why I chose each one.

1) For our first attachment, I went with the ‘Duckbill Choke’ Muzzle because it gives us +10% Hipfire Accuracy. A slight extend on our range is always a bonus, especially with shotguns. There are also no downsides to using this attachment.

2) I also went for the ’22” Extended’ Barrel because it adds an effective damage range that our shotgun could deal by 12%.

3) In terms of the ‘Steady Aim Laser’, I felt that it is necessary because it adds 19% Hipfire Accuracy.

4) The ‘Speed Tape’ is really a no brainer because it allows your soldier to pull out the shotgun 10% faster. It is extremely beneficial towards our ‘run and gun’ class setup.

5) The ‘Tactical Stock’ attachment will give you an additional 10% Aiming Move Speed, which is vital for the class we are looking to build.

Note: If you are wondering why I didn’t select an optic, that is because I personally don’t see the need for having one. If you do need one to shoot more accurately though, by all means, make sure to add one. In terms of what attachment you could substitute, I think that the ‘Steady Aim Laser’ would be the one most suitable to be replaced.

You really could go for either the stun grenade or the smoke grenade, but I feel like the stun would be more effective when rushing into buildings and tight spaces, which is when I can use the stun to shock opponents for a few seconds.

As you are effectively going to be running and shooting when using this class, having a C4 can be a great benefit for clearing up tunnels from claymores and proximity mines or other tight spaces where players might be hiding.

The reason why I chose ‘Field Mic’ as our field upgrade is because when you strategically set it up, it can provide you with valuable intel for enemies that are nearby it.

In term of perks, you could really go for any of them depending on what you want to get out of your class. Feel free to check out our complete list of all COD Cold War Perks, which will help you make more of an informed decision as to which perks you should go for. For me personally, I would go for:

1) The reason I went for tactical mask is because I want to be fully capable of firing back in case I am stunned. This perk is especially useful for smaller maps. Alternatively, you could use ‘Flak Jacket’ if you want to take less damage from enemy explosives such as grenades, claymores, and proximity mines.

2) Scavanger really is a no brainer. If you are good with your aim, chances are that you aren’t going to die in any of your 1v1 encounters. So, replenishing your ammo from dead players is a huge plus to continue playing your game without having to worry about running out of ammo.

3) Cold Blooded was my choice for the third perk because I like not to be seen or targeted by annoying choppers and helicopters. It gives me more peace and privacy while I play my game and rack up my KD score.