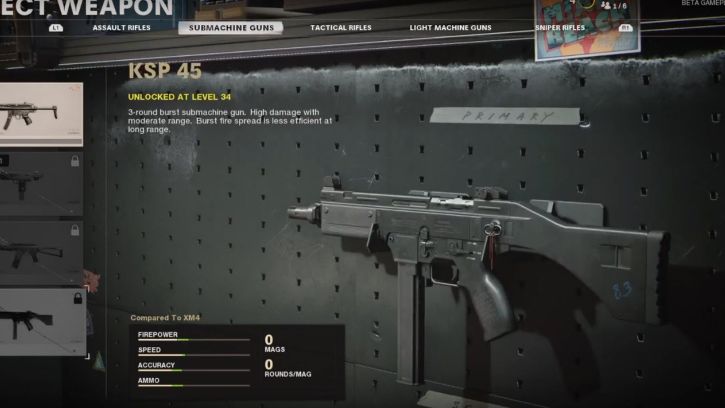 The KSP 45 is a burst-fire SMG that makes its way to the beta of Call of Duty Black Ops: Cold War. The unique thing about this SMG is that it is currently the only SMG that is not fully automatic, making it an SMG that is quite effective at range.

In this guide, we will be looking at this unique SMG and how it plays into the meta being the only SMG that offers burst-fire. We will also be looking at the loadouts that will make this gun shine.

Being the only SMG that has burst-fire as its firing mode, it places itself in a unique spot where the KSP 45 is actually quite competent when combatting at a distance.

It also makes its accuracy second to none when it comes to SMGs because of its burst-fire mechanic as it makes recoils a lot more manageable than full-auto SMGs. Damage is also on the high side for this SMG making it a force to be reckoned with.

Despite its accuracy being above average, it still suffers from being an SMG, meaning that its range and effective damage range is quite low. Also, despite its damage being relatively high as well, the burst-fire mechanic might be a hindrance to its full potential as fully automatic SMGs can dish out more rounds than the KSP 45 can hope to.

Attachments that would increase fire rate are what we are aiming for here as we want the KSP 45 to be manageable as well as keep up with its other SMG rivals. Other stats we would want to increase are damage as well as range stats like effective range damage so that we can build upon its burst-fire mechanic.

An absolute beast of an attachment, the Sound Suppressor effectively renders you invisible in the minimap when you are firing making stealth kills so much easier to execute.

It guarantees to confuse a lot of enemies as to where the bullets are coming from. Take note however that it reduces the KSP 45’s effective damage range, but it is a small price to pay for the stealth that it brings.

While concealment is important, you can also choose the Infantry Compensator for more control. The KSP 45 shines as an SMG that can hit long-range targets as well.

The first initial burst might be accurate but the next ones are sure hard to control and the Infantry Compensator attachment will help with that. It does sacrifice concealment so you should be more aware if you are running this.

The SFOD Speedgrip adds more sprint speed which is the best mobility atttribute to get in Call of Duty Cold War. It also adds more control while only sacrificing move speed which is not that significant to lose.

The Steady Aim Laser helps with quick aiming as it increases hipfire accuracy with no real cons attached to it, making it more of an assistive attachment instead of an essential one. You can do without this if you decide to go for the Law Breaker Wildcard, which we will be talking about later.

The No Stock is an attachment as it might confuse some people. It increases sprint to fire time which is an amazing attribute for all SMGs in general.

The Fast Mag attachment increases your speed from reloading. While it is not that important for the KSP 45 compared to other SMGs, you still do not want to sacrifice other attributes for more rounds. You can kill an enemy with just one simple burst from the KSP 45 which is why it is kind of efficient with its bullets.

The Airborne Elastic Wrap attachment is great for lowering ADS time and even adds flinch resistance when you are dueling enemies. The flinch resistance gives you an upper hand when both of you hit each other with the first shots. It does lose you sprint to fire time significantly but the No Stock attachment will help with that.

The Law Breaker wildcard actually fits the KSP 45 very well because it already excels in a lot of areas, therefore the reduction of attachments from 8 to 5 is an easy choice to make.

There are essential attachments that make the KSP 45 infinitely better like the 10.8” Paratrooper, but other attachments are throwaways for it that you are better off picking an additional primary arm to complement the KSP 45’s strengths.

The KSP 45 excels in mid-range combat, so picking a close-range primary arm like the Milano 821 SMG is a safe bet. If you want to be a distance shooter, pick up a sniper rifle like the LW3-Tundra to make yourself as stealthy as possible when you have the KSP 45 equipped with the Sound Suppressor attachment.

The KSP 45 is definitely an SMG that sets itself apart from its other SMG counterparts, therefore having its own unique strengths and weaknesses. In turn, it gives players the option to be a more tactical SMG user as the burst-fire mechanic rewards players that pick their shots rather than those who rush in and go full rambo on the opposition.

It is also one of the few guns that is naturally better to pick the Law Breaker Wildcard because of the immense strengths it brings to the mid-range. Its attachments are crazy good but there are some attachments that can definitely be replaced by a primary firearm to do better. The KSP 45 is truly a versatile SMG that knows its place.