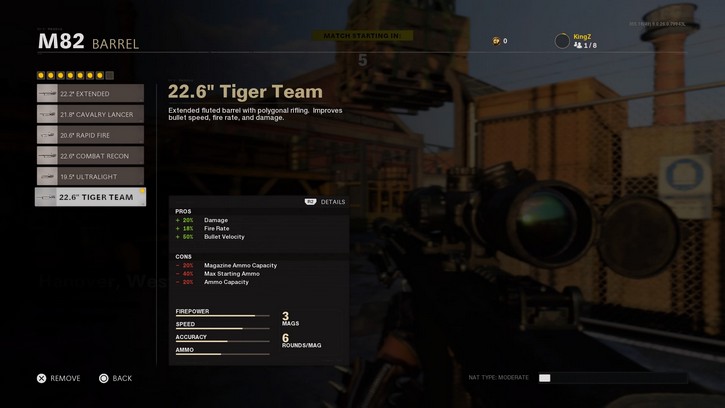 The M82 or the .50 Cal sniper rifle is the only semi-automatic sniper rifle in Black Ops Cold War. It will take a while before you can unlock this highly coveted weapon.

This advanced guide will show you the best M82 loadout in Call of Duty Black Ops Cold War.

Being semi-automatic makes it surprisingly strong for a hipfire spam in close range combat which is good enough since it is a sniper rifle. You will have a hard time dealing with enemies with rifles and SMGs but you still have a better shot than a Pelington 703 or the LW3 Tundra.

The reload speed is quite fast especially with the right attachments that improve it even more. The default scope is great as well where you can omit to take the optics if you are not building with a Gunfighter wildcard.

Immediately after trying the M82 out, you can already tell how slow you are compared to holding other weapons that are not an LMG. Not your ideal sniper rifle for fast-paced gameplay.

The ammo capacity is incredibly low especially for a semi-automatic sniper rifle that you can spam as much as you want. It might be a problem if you keep on missing and you will not have a good secondary for it since you will be using the Gunfighter wildcard. While it is not mandatory, it is best to invest as many attachments as you can with this weapon.

The 22.6″ Tiger Team barrel attachment is the best barrel for it by far but it is that last attachment you will unlock for the M82 and it will take a lot of time to do it. It increases damage, fire rate, and bullet velocity for less magazine ammo, less max starting ammo, and less ammo capacity.

The damage is a bit overkill but it will be needed because of the damage reduction you will get from the Wrapped Suppressor muzzle attachment. You can still one-shot enemies by hitting them in the chest or the head at any range with this. The fire rate helps too when you miss your first shot or when you hit the arm, hip, or leg.

It is a great advantage to have when you are shooting from a distance. The aim down sight speed reduction is a big loss here since it is an important attribute for sniper rifles in general.

You can choose to change this attachment if you do not mind getting noticed in the minimap. It would greatly help but I prefer concealment over it for my playstyle. The decreased bullet velocity will be alright since you can still one-shot enemies with it.

The Airborne Elastic Wrap attachment helps with faster aim down sights time and flinch resistance for a reduced sprint to fire time and shooting move speed. Again, the best attribute for sniper rifles, even without a quickscope build, is still aim down sight speed.

The flinch resistance is a nice touch because you will not be able to be the first one firing in a fight every single time. That small kick you get from getting hit will almost be irrelevant and you can shoot back more accurately. The attribute reductions are not a big deal so this is a staple attachment for the M82 like the 22.6″ Tiger Team.

The Raider Pad attachment will increase your sprint to fire time and aim walking move speed for hipfire accuracy. Only a slight bonus here to benefit from and if you are not going for the Gunfighter wildcard, this will be the attachment you will take out.

Aim walking move speed is excellent for pre-aiming angles especially on smaller maps like Checkmate and Armada. Your playstyle should always be pre-aiming since the M82 is quite slow. Hipfire accuracy reduction will almost make it impossible for you to hit enemies right up in your face, but it is already bad in the first place, so it is fine.

The SOF Target Designator for magnified reveal distance with the aim down sights. It is only good if you only aim once you see an enemy and good for large maps when you pre-aim. It is not the greatest attachment and it is also another candidate for an attachment you can drop if you opt not to use the Gunfighter wildcard.

The 7 Rnd magazine attachment will negate all the reductions from the 22.6″ Tiger Team and more. No attribute reductions as well and the faster reload is a nice touch to it.

While the first set of perks are not that useful with the perks available by only giving you slight survivability, it is good to try out Forward Intel for more information on enemies roaming around the map.

For the second set of perks, I prefer running with the Scavenger perk in rare cases that I run out of ammo, I would not have to go for resupplies for ammo or swap to a different weapon on the floor. For Lawbreaker type builds on the M82, you can change this for Cold Blooded and Ghost which are two crucial perks for any build.

The third set of perks will be for Ghost as I, personally, have it at a higher priority than the Cold-Blooded perk. It is because you cannot be tracked by Spy Planes that are always up throughout the game. Both are really good and AI-controlled killstreaks are also active most of the time.

Gunfighter and Lawbreaker are the two best options for this M82 build. The Lawbreaker wildcard adds both the crucial perks while omitting the Scavenger perk because you already have a good secondary weapon because of this.

The Gunfighter wildcard is more for the bold because, in all honesty, most of us will rarely switch weapons with a weapon like this at our disposal. Instead of switching to secondaries, you can just refrain from entering small and enclosed areas on the map.

This adds so much flexibility to your build but it will take a while to level up faster to unlock attachments while swapping weapons multiple times in a match.

You can choose to bring a smoke grenade or stun grenades as your utility. Frag grenade or C4 for Domination points and enemy campers. Field Mic for overall support and gathering information near your location. It covers the flank when you are holding angles with your M82.

While the M82 takes insanely long to unlock, it is all worth it because it changes the dynamic of playing the sniper rifle just by being semi-automatic compared to the bolt-action sniper rifles.

It still takes a great deal of mechanical skill to deal with enemies in close to mid-range combat and you should get used to this without panicking. If you are getting shot at, it is best to aim and shoot instead of running if you are not near any cover.