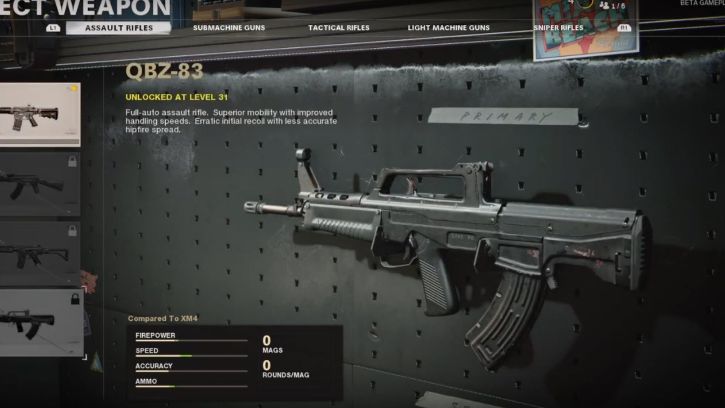 The QBZ-83 is a fully automatic assault rifle making its debut in the Call of Duty Black Ops: Cold War beta. It is quite an agile AR but the trade-off is that its accuracy is a bit lacking thanks to its terrible recoil and bullet spread.

In this guide, we will be looking at what could make the QBZ-83 your AR of choice amid the plethora of ARs available in the game and check out the best attachments you can equip to it to create the best loadout.

The QBZ-83 is the quickest AR you can get right now when it comes to mobility as well as handling. If you find yourself in a firefight, you will definitely come out on top against other AR users as your move speed and aim speed will trump theirs. This also means that you can maneuver your way out of the way easier than with other ARs. This makes the QBZ-83 quite the formidable AR in close-range skirmishes.

If you find yourself wanting to weave your way in and out of fights, or just prefer a quicker playstyle, then the QBZ-83 just might be for you.

Although the QBZ-83 is a monster at close-range, it will suffer in combat that has a bit more distance because of its poor accuracy. Its recoil is pretty abysmal and its hipfire spread is also pretty bad, having to force you to go down the iron sights or scope just to have a more accurate tie hitting targets.

Saying this, the QBZ-83 may as well be an AR that is not to be used by new players as its learning curve is higher than average.

Attachments that increase your accuracy stat will be the main order of business here as we will be turning the QBZ-83 into a formidable AR, not only in close-range where it already excels, but also in mid-range. In turn, this will make handling the QBZ-83 much easier.

We start off with a variety of scopes that would go well with the QBZ-83, and these scopes will all come down to preference. The Microflex LED is one you would use if you just want a better crosshair than that of the stock crosshair as it does not have any magnification.

The Kobra Red Dot and Visiontech 2x scopes are where magnification perks come into play. If you think you can handle the QBZ-83’s recoil, go for more magnification. Just take note that this will hinder your close-quarter effectiveness.

The Infantry Compressor attachment is for more control on the recoil to help you spray better especially with farther targets. While the bonus is not that significant, it does not have any attribute reduction on anything else which makes it really effective.

The Agency Suppressor is for concealment while firing. It is a great advantage to have but you are sacrificing damage for it. The concealment is still great to have and most people actually prefer it over anything else for the attachment slot.

The 15.5″ Reinforced Heavy attachment gives a damage bonus but not as big as the 15.5″ Task Force attachment. The only reason you go with it is to reduce the mobility reduction if you want to play a little bit faster.

The 15.5″ Task Force is overall, the better attachment. The huge chunk of bonus from damage, bullet velocity, and range are amazing. It does reduce your control over the spray significantly but if you get used to it, it will be the best in slot attachment for it.

There is no real choice other than the Steady Aim Laser in the body attachments as it increases hipfire accuracy without sacrificing any attribute, something the QBZ-83 severely lacks.

The SFOD Speedgrip increases your sprint move speed which is the best mobility attribute in the game. It is also the last unlockable attachment for the slot which will make it hard for you to unlock. While it reduces overall mobility, you will be sprinting 90% of the time you are playing anyway so the cons are not a big deal to loss.

Piling on to the speed of the QBZ-83, the magazine of choice would be the Jungle-Style Mag. The reload quickness is great if you have access to resupplies and even the Scavenger perk. It is great to have without sacrificing any attribute for it.

Most of the good bonuses on different magazines reduce your sprint to fire time which can be bad. As long as you are accurate with your shots, the magazine clip is good enough.

The Field Agent Grip attachment gives you more control for the QBZ-83. This is definitely the staple attachment for this slot if you are using the 15.5″ Task Force as it will lessen the reduction caused from that attachment.

The Raider Stock attachment lets you fire from a sprint faster while sacrificing hip fire accuracy. It is a good trade especially if you already have a Steady Aim Laser attachment equipped.

The Marathon Stock does the same thing as the Raider Stock attachment but with less bonus from sprint to fire while offering no reductions. It is a good alternative if you want to play close.

With the Law Breaker wildcard, you can equip a different primary weapon as your secondary weapon, so if you think that the QBZ-83 might not be scratching the more mid- to far-range combats, you can always use this wildcard to supplement its weakness with a sniper rifle like the LW3-Tundra or a more capable tactical rifle.

As for attachments, just look at the Gunfighter loadout section and decide which 3 attachments you can live without as the Law Breaker wildcard only allows for 5 attachments. Decide whether you want to increase the capability of the QBZ-83 or just further its speed stat to ridiculous levels to have both a monster of a close-range AR as well as a ranged secondary weapon.

The QBZ-83 is an interesting AR as it can pass as an SMG with the right attachments. Saying this, it might be an AR that could be a bit too unwieldy for newer players, but its speed is just unparalleled making it an incredible gun for close-quarter combat.