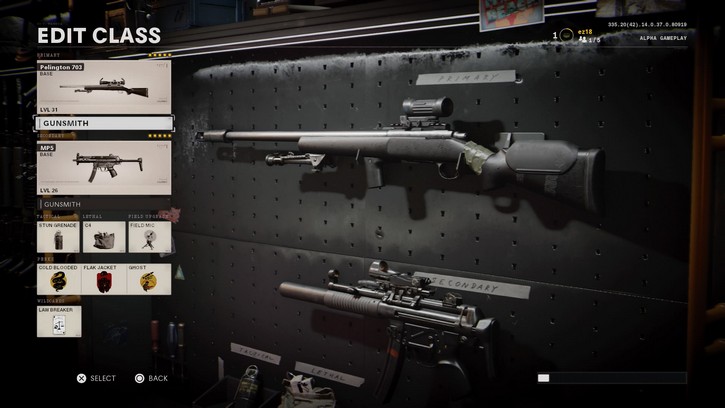 There are only two snipers out and the best sniper for quickscoping in Call of Duty Cold War is an easy pick. It is only possible with the Pelington 703 because of its fast aiming speed compared to the LW3 Tundra.

This article will show you the complete loadout to be used and explain, in great detail, the thought process of every part of the loadout chosen. This can give you a better idea of how the attachments work and you can follow the rule similarly with other weapons.

The term ‘quickscoping’ was coined even before the rise of Call of Duty’s popularity. It was not invented by anyone and it just plainly describes what it says which is to quick scope.

Any player with a sniper rifle, especially with a scope, that uses the aim down sight or ‘ADS’ button and shoots as soon as the scope or sights appear is called a quickscope. The video above is a quick example of what it looks like and it has been around since Counter-Strike 1.6.

The best sniper for doing quickscopes in Call of Duty Cold War is the Pelington 703. The aim down sight or ‘ADS’ speed is just too high compared to the LW3 Tundra. You would want as much aiming speed as possible for your quickscopes and the LW3 Tundra is more built for the long-range sniper rifle build that can one-shot enemies even at a farther distance.

While the Pelington 703 is less powerful than the Tundra, it can still one-shot enemies if you hit them straight at the torso or head. Hitting them near the hip or any of the other limbs will not kill them even if you add all the attachments that increase maximum bullet velocity which increases the overall damage of the sniper rifle.

There are two builds you can follow depending on your playstyle and I will explain all the attachment choices in more detail so you have more understanding about what the loadouts bring to the table and how you can tweak it to your playstyle.

This is the best loadout for a quickscoping sniper rifle build. The Lawbreaker wildcard adds more flexibility to your playstyle where you can switch to another strong primary like the X4 (see the best close-range X4 build here). Preempting weapon switches that are more powerful when entering closed spaces is a great advantage to have.

Having the best weapon for close-range combat and the best possible mid-range weapon with the sniper rifle can make you unstoppable. Here are the attachments used for the Pelington 703.

You can throw away the Fast Loader, Infiltrator Grip or Axial Arms 3X depending on what you prefer. The rest of the attachments are mandatory. You can check below for the Gunfighter wildcard loadout for more attachments on the Pellington 703.

The optics are a personal preference and the Axial Arms 3X is my personal favorite and I would highly recommend it for its clean scope. The 3X magnification can be a bit much for enemies within 5 meters but if you are already used to doing quickscopes, the aim assist will do the rest and you will just have to rely on your perfect timing and shoot as soon as you feel the scope appearing.

26.5″ Tiger Team adds more damage which increases the effective range of your quickscopes. Not only that but also, it increases reload quickness and bullet velocity which are both crucial for the quickscope build.

Fast Loader is crucial for smaller maps if you want to force out your sniper rifle frequently. The reload speed for the Pelington 703 has one of the slowest reload speed in the game. This attachment helps you get it up and ready along with the other attachments.

Speed Tape is one of the easiest attachments to unlock for this quickscope build and it reduces aim down sight time which is the number one priority for this build to work. While other attachments in this category give more ADS time, you suffer greatly from reduced sprint to fire time which happens quite frequently while playing so it will not be a great option.

Equipment to be used are stun grenades, frag grenades and the Field Mic. You can replace Field Mic with any personal preference as it does not matter as much. Since the Lawbreaker wildcard allows you to choose any perk for your 3 slots, you should run with Cold Blooded, Ghost and another perk you want.

Scavenger can be great if you think 20 bullets for the Pelington 703 is not enough. Flak Jacket can increase overall survivability from players who like to throw explosives every time they spawn. The last option would be the Tracker perk which allows you to see enemy footsteps that are near.

This next loadout is built around the Gunfighter wildcard which removes your good close-range combat weapon. This is for players who want to practice quickscoping and those who refuse to use any weapon other than the sniper rifle because they are just so good at it. The added attachments have minimal advantages but those advantages can be good if you really want to play with pure quickscopes.

Here are the attachments used for the loadout and you can choose any secondary you want because you will most likely not be using them anyway.

You still pick all the attachments mentioned above with the Lawbreaker wildcard loadout. The attachments added here are Flash Hider .308 and Steady Aim Laser or Mounted Flashlight.

The Flash Hider .308 does not help your quickscopes but it can definitely help your aim when you try to fire a more accurate shot by aiming down sights longer. You cannot use any moderators or suppressors because of that damage reduction so the Flash Hider .308 is the only option here.

The Steady Aim Laser improves your hip-fire accuracy which allows you to use your Pelington 703 as a less potent shotgun. Mounted Flashlight gives more reveal distance on your aim and you would not want to have anything higher than the 20% added here since it can throw you off when your enemies are close. It highly depends on the map if it is small or large.

Tips and Tricks to Remember

Every Call of Duty game has its own version of a quickscope loadout. The game is not complete without it. This build is mostly played at a fast pace and will keep your adrenaline flowing especially when you land shot after shot. The build has the highest skill cap in the game and is one of the strongest if played perfectly.