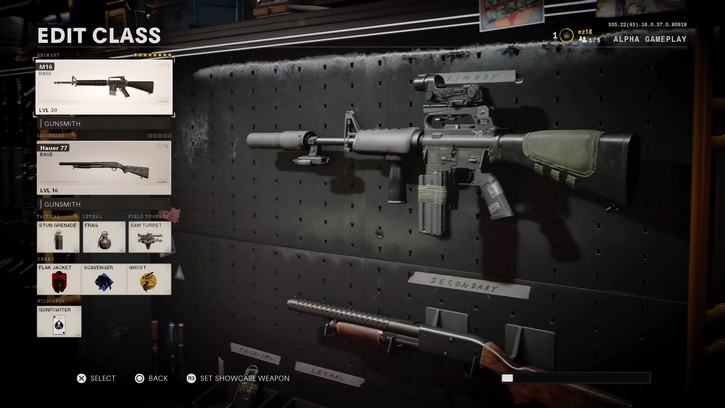 The M16 fires 3 round bursts which can make it one of the fastest killing guns in the game because of the amount of firepower it packs along with it. It is usable with hip-fire, unlike the Type 63.

However, the Type 63 packs an even bigger punch than the M16 but it is semi-automatic that only shoots per bullet. It can still two-shot enemies at a distance which makes it extremely potent as a long-range weapon.

Here are all the attachments you should use for the M16 and the Gunfighter wildcard will be required for this one.

The Kobra Red Dot’s X1.5 magnification is perfect for tactical rifles and offers them more range where the M16 will shine the most. You will be at an advantage against all weapons at a distance and you can even fight sniper rifles as long as they miss their first shot.

With the M16 high firepower, the Muzzle brake 5.56 is still good for more added damage. It can kill players from a distance with the same amount of bullets you shoot at close quarters. You would ideally want to kill players with the first 3 round burst of the M16 and this attachment will help you with that. The first full burst will kill any player as long as it hits the torso.

The 16.3″ Rapid Fire attachment is the best choice because it adds fire rate without reducing anything else. It is used to improve your followup after the first initial burst. The faster the fire rate, the faster you can recover from missing or changing targets. The 16″ Strike Team attachment is also a good option which adds aiming speed in exchange for a reduced effective range.

The Front Grip attachment is my preferred choice over the Marshal Foregrip because of the added control. Horizontal recoil control is great for tactical rifles as the vertical recoil is easy to manage. Marshal Foregrip is also great for the overall mobility which adds move speed to 4 different areas, most notably the base move speed and aiming move speed.

Steady Aim Laser for increased hip-fire accuracy which makes it possible to one-burst players even while sliding. It was showcased once with the video above and it is already accurate at that close so sacrificing aiming speed by using the SWAT 5MW Laser Sight is a bad idea.

Fast Mag is the perfect choice among the 3 attachment choices for the magazine. 30 rounds are already insane for a tactical rifle and you would not need more or sacrifice any other benefits.

Quickdraw handle is the better attachment over the Mike Force Rear Grip because of the importance of sprint out speed at times. Quickdraw handle does not bring any disadvantage and is the safer choice overall.

Here are the best attachments for a Type 63 loadout which uses the Gunfighter wildcard as well.

Kobra Red Dot is the best optics for tactical rifles with the 1.5X magnification. The choice has the same reasoning as the M16.

The Muzzle Brake 7.62 is a crucial attachment for this gun because it allows you to two-shot enemies even from afar. It does require more mechanical skill than most rifles but that is where the Type 63 shines the most.

The 16.4″ Rapid Fire choice is the same as the Muzzle Brake 7.62 and is to be able to two-shot enemies from afar. The 17.3″ Strike Team attachment will lose you some effective range and some much-needed damage.

Ther only choice here is the Steady Aim Laser because you will always be at a disadvantage already up close with this gun so losing aiming speed for more hip-fire accuracy with the SWAT 5MW Laser Sight can be a waste at certain times.

The 30Rd Speed Mag attachment is for players who like to play at a fast space but also smart with positioning. Always playing around cover will assist you most of the time when reloading. Since you are wanting to fight players from a distance, you will likely encounter them clumped up together when you do find them.

That extra 10 rounds to your magazine will be too good to pass up especially on maps like Satellite where the map is small but at the same time, there is a huge open space area around the sand dunes. Reload Speed will help you engage again faster before they get to a closer range.

The Quickdraw Handle attachment is the better choice again for the improved aiming down sights speed. It is recommended to always pre-aim your gun to know when there is an engagement specifically in short to mid-range combat. You will be at a disadvantage at draw speeds against most of the weapons in the game. You might think about adding the Lawbreaker wildcard to add another short-range weapon like the AK47u or XM4 but the extra 3 attachments are too important to lose for the Type 63.

Equipment, Perks and Killstreaks for Both Loadouts

Most of the choices here are interchangeable depending on your preference. The perks are more pivotal except for the choices in perk 1.

Stun grenades and frag grenades are the best choices here. Use smokes for capturing points or maps like Satellite. Since I play a more conservative style when using a tactical rifle, I tend to be behind my teammates most of the time which makes Field Mic or even a SAM Turret great to have. Jammers will be good for point captures and most of these equipment choices depend on the game mode or map.

The best combination would be Scavenger, Ghost and Flak Jacket. Cold Blooded can be swapped with the Ghost if preferred.

Run Spy Plane with any other killstreaks available except for the RC-XD for most game modes. Reaching the Chopper Gunner killstreak is always satisfying to achieve in a match.

Tactical rifles are the preferred weapons to use on large maps with long spaces for fighting. Only the AK47 assault rifle can match its firepower and players who dislike using sniper rifles can opt for the tactical rifles. M16 should be the more powerful weapon all around but you can choose the Type 63 if you like the feel of that kind of playstyle because it is different.