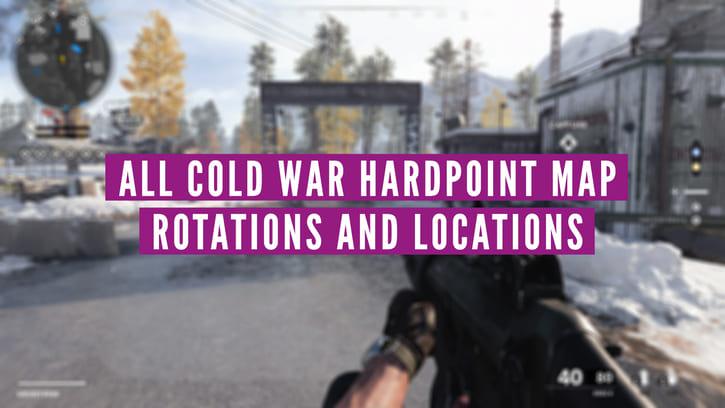 Hardpoint is amongst the most popular multiplayer modes in the Call of Duty series. When it comes to Call of Duty: Black Ops Cold War, this will be no exception.

In this guide, I will show you all Hardpoint rotations and locations for every single one of the Call of Duty: Black Ops Cold War maps.

On top of that, I will also provide you with additional tips and strategies for each location to give you the best shot at winning.

Here are all the Hardpoint locations and rotations in the COD Cold War map Armada.

Based in the North Atlantic Ocean, the Armada Call of Duty Cold War map will demand you to be ruthless in close-space engagements. You must also be brave while exposing yourself to the enemy while on the ziplines as you cross from boat to boat. In a fast-paced environment, the tips that I have provided you below will help you immensely to achieve your desire Hardpoint outcome.

P1: To be defend this hardpoint, camping around the ladders on the side of your squads’ spawn will reduce the chances of getting shot at from the deck. When it comes to attacking, I would recommend you to straight up jump in the water from either side and slowly attack the Hardpoint.

P2: When it comes to defending, there are two things that you need to watch out for; please coming up the ladders and players coming out of the windows on the opposite side of the lower deck. Unfortunately, this applies to both sides of the Hardpoint meaning it will be quite hard to defend four potential enemy entry points. To attack, I am a big fan of the side windows as if you are using the ladder, there is a second or two that makes you unable to shoot at your opponent, making you extremely vulnerable.

P3: Hiding in the container is a great way to defend this hardpoint as you are covered from enemy fire in all directions. When it comes to attacking, always make sure to clear out the container with semtex or a stun grenade before rushing in.

P4: The best way to defend this Hardpoint is to pick a side and camp behind the boxes while awaiting for enemies to swarm in through the doors. Also, make sure to watch for the ladders from the submarine as many players like using them to attack. When it comes to attacking, make sure to have plenty of grenades and stun grenades to clear out the lower deck from enemies that are camping.

Here are all the Hardpoint locations and rotations in the COD Cold War map Cartel.

The Cartel map offers plenty of short to long-range rotation routes, making it suitable not only for shooting enemies in the distance with your Tactical Rifle loadout but also for close-range action with your Hauer 77 loadout.

If you are in love with snipers, you could even hold down the central tower and snipe oncoming opposing players with your quick scoping sniper.

Regardless of your weapon of choice, follow the tips below to help your squad establish dominance in the cartel compound.

P1: To defend, hide behind the trick (on the opposite side of where your enemies are spawning). To attack, I would recommend to rush from North to South from behind the wall. Also, throwing grenades and stun grenades can greatly help you clear out enemies holding the Hardpoint with ease.

Here are all the Hardpoint locations and rotations in the COD Cold War map Checkmate.

Set out in Berlin, East Germany, Checkmate is a medium but rather compact map. For all of you that are craving some action-packed gameplay on Hardpoint, this is probably the map for you. Follow my tips from below, and lead your squad to victory.

Here are all the Hardpoint locations and rotations in the COD Cold War map Crossroads.

Situated in USSR’s rural Uzbekistan, this classified location is the ideal battlefield for outdoor enthusiasts. Though, as always, you should always keep an extra eye our as there are many little places where your enemies could be hiding, including around the Hardpoints. Follow through the tips below to gain a deeper understanding of the positioning required to dominate the Hardpoints on Crossroads.

Here are all the Hardpoint locations and rotations in the COD Cold War map Garrison.

Based in Hanover, West Germany, Garrison is a medium sized map with plenty of indoor and outdoor action. If you are a fan of tight spaces and close-combat action, you will absolutely love this map. Though, follow the tips from below for each of the Hardpoint locations to solidify your dominance on the opposition.

Here are all the Hardpoint locations and rotations in the COD Cold War map Miami.

In the heart of Miami’s South Beach, under the cover of the night and vibrant clubbing scenery, you can become an easy target from both snipers or even close-ranged assassins. To successfully win Hardpoints on this map, be sure to follow my guidance below where I have left you the most important tips that you need to dominate Miami.

Here are all the Hardpoint locations and rotations in the COD Cold War map Moscow.

Moscow is a map like no other. With long boulevards, and enclosed spaces, you must always be on the lookout for either a sniper or someone holding the Hardpoint with a shotgun. Follow the tips below to successfully and consistently establish dominance in one of the four Hardpoints on the map.

P1: The fight for P1 is always a busy one on Moscow, but the most important aspect of fighting for this hill is actually ensuring you have the best spawns for P2. P2 is at kiosk just outside of P1, but you either spawn close to this or extremely far away depending on which side of the map your team is on. It’s worth sacrificing a good few points in the first hill to battle for spawns for P2.

P3: P3 has a God-like head glitch on the left hand side as you look up towards the escalators. Crouch down behind the wall on the left of the hill and you’ll be almost impossible to remove, especially if you have a trophy system down to protect you from equipment.

P4: This is out in the open street and can often see the points shared between teams multiple times. At this stage, you should not only be thinking about the return to P1 next, but also the return to the battle for P2 spawns.

Here are all the Hardpoint locations and rotations in the COD Cold War map Satellite.

Satellite is quite an open map, making everyone an easy target. Thus, be sure to follow some of the tips that I will provide you with underneath if you want your team to truly dominate the scene.

P1: To defend P1, you want to be in or up against the plane areas on the C-flag (domination) side.

P2: The best way to defend is to get a close-range weapon for any enemies that are trying to attack. Else, get a sniper to pick out enemies in the dunes or from the caves. To attack, grab the best rushing loadout and storm the Hardpoint.

P3: To defend, stay in close proximity to the vehicles for cover from oncoming enemies. To defend this Hardpoint, it is essential to have a close to mid range loadout such as an MP5 or a AK47u.

P4: The best way to defend is to stay in the Hardpoint and hide behind the vehicle as that will help you avoid most of the enemy fire. As for attacking, sneak behind the south side of the map behind the dunes and use the element of surprise to eliminate as many enemies as you can or hold the enemies with a sniper from further out while your team storms in.