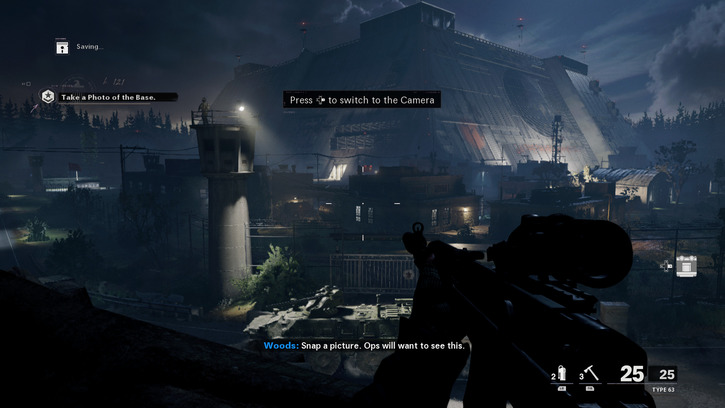 The mission titled Redlight, Greenlight is arguably the best mission of the campaign mode in Call Of Duty: Black Ops Cold War. The mission is a thrilling mixture of stealth and brute force as you slice and power through a Ukrainian military base with the legendary Captain Woods. But, the military base holds a big secret.

There is a lot of intel on offer in a Russian base for the United States military. With the two countries locked in an intense diplomatic battle, they will go to any lengths to gain the upper hand. During the mission, you are told that you can collect 6 pictures of different areas of the military base that will give you a detailed blueprint of Russian operations there.

This guide will give you the location of all six of these blueprint images in detail.

Location of the Secret Intel and How to Find Them

At the start of the mission, you take out a few guards guarding the entrance to the base. The guards are caught unawares as Woods and his comrade snipe them off from a distance. But unlike the second mission to kill Arash, you can make the shots count.

After this, Woods asks you to investigate a small security gate. This bit of intel is a freebie. It lets you know that this mission involves optional 6 pieces of intel that you can collect too. The image is on the wall of the security booth. Quickly grab a picture and mosey on. Remember, the other pieces of info won’t be as easy to find.

After you navigate through a hangar/military garage with incredible stealth, you will find yourself sidestepping Russian tanks and search squads. The entire base seems to be on edge but still unaware of your presence. If the guards are alerted of your position, we suggest restarting the last checkpoint as the mission is very nearly a lost cause.

Throughout this incredible nervy journey to enter the base, Woods is uncharacteristically absent. When you reach the door to enter, pick the lock and you are instantly caught red-handed and apprehended by a Russian guard. Woods appears out of nowhere and rescues you and you find yourself in the communications room. To find the next bit of intel, head into the small room on the left. There are no pointers showing you where to go, so look for another map on the wall and grab a picture of it.

This one is the trickiest bit of intel to find during this mission in CoD Cold War. After you enter an arcade with slot machines and games, you find yourselves in the midst of a Russian training exercise for which they built a makeshift American high street/mall.

After you take out the first wave of Russian soldiers and guards, Woods will ask you to move up the stairs and head into the next area. This is where it gets tricky. After an intense battle, you want to push on. But to find all 6 pieces of intel, head back and search for the bar. You will find it on the right side. Enter the bar and head upstairs. You will find a dingy room. On the far corner wall, you will find the next plan on the wall which you can photograph.

After a couple of other encounters, you enter the Russian military command base. Here, you hack a computer to gain more information on Project Greenlight and some other secret Russian projects.

After this, you head further down into a brightly lit room and find that more forces have been deployed to attack you. Run past this heavy artillery gunfire into another room. On the right side, you will find a tiny door leading into a small storage closet/room. Look back and you will find the next intel on the wall opposite the door.

After you finish hacking the computer, leave the military command center and take out the enemies outside. There are some mini-bosses here who can do some heavy damage (tip: use grenades on these big boys).

After this small battle, you find yourself heading down a flight of stairs. Once you climb down, there is a tiny room immediately to the right. This is just beyond the steel beams in the middle of the clearing. cross this to the other side and enter the small door. The picture of the map is on the left.

After a big battle, you and Woods rush into a brightly lit room with mannequins. Suddenly, you face some heavy fire from artillery outside. Make a dash through the corridor and you will find yourself at the entrance to a military vehicle storage facility. take out the wave of enemies and once everyone is dead, you can head to the tank on the far side and shoot your way out.

But before you head to the tank, walk back near the entrance and you will find a room to the right. Head inside and grab a picture of the map on the wall.

Collecting these 6 bits on intel shows you how Hudson is a double agent and is selling secrets to the Russians. This enrages Woods and it sets you up nicely for the next mission of the game.