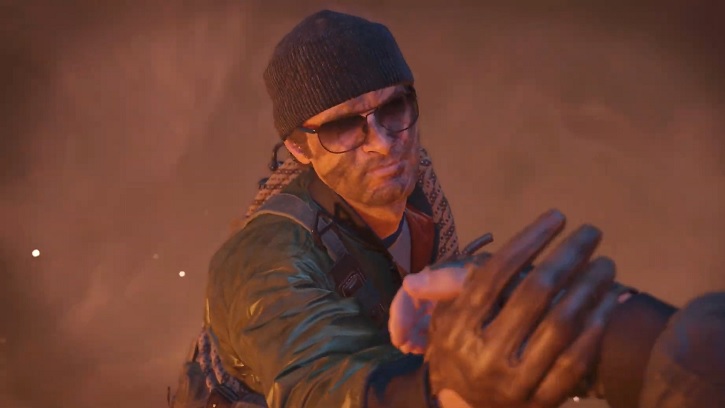 After a quick first mission in Black Ops Cold War, it becomes clear that Woods, Mason, and the crew have one main objective – getting to Arash. After the squad extracts information from Qasim after an intense rooftop chase (mission 1), they find out that Arash is holed-up in Turkey and is heading to ‘Trabzon Airfield’ the next day. This sets you up for a big showdown to try and neutralize the target.

After reaching Trabzon Airfield, head up the pathway on the right and scout the airstrip for signs of Arash. Initially, he is not visible. But, an SUV arrives from the left – your target is inside. Focus on the SUV and wait for him to step out. He quickly disposes two hostages and then heads towards the open cargo hatch of the airplane. Adler asks you to take him out with the sniper.

You Will Miss The Shot

There is no possibility of making the shot. No matter how high above Arash’s head you aim, the bullet will dip to hit the guy in front of him. This is a mission quirk in the CoD Black Ops Cold War Campaign that triggers the next stage of the mission. Arash rushes into the plane and it starts moving in an attempt to flee the attack.

This alerts the entire patrol and you will have to take them all out. Get down from the ledge you are on and push up towards the plane while taking enemies out. This is the best way to get close to Arash.

Get to the Jeep

Instead of aiming for the shooters on the back of enemy vehicles, shoot the vehicle itself as they explode quickly. You will have to shoot down at least 4-5 enemy squads on vehicles pursuing you while you chase down the plane on the tarmac.

RC – XD (Get the RC Car Under the Plane)

This is the only place on this mission that will frustrate you. You might die several times trying to reach Arash and the plane. But fret not, there are a few things you can do to get there easily.

Once the RC is deployed. Try to stick to the center divider line on the tarmac. Instead of veering away to the left or right, this is the best place to be. A jeep will swerve into your path that can be easily avoided with a quick flick of the analog stick (Vehicle control is excellent in Black OPS Cold War)

Make sure you boost at the right times. Boost the RC with L3 at the start of the RC segment. After dodging the car from the left, a boost will get you back on course with the belly of the plane. Listen to the incremental beeps indicating the detonation sequence for the RC. If you feel that the RC is close to exploding, boost quickly to reach the target.

The landing ramp of the plane will lift just enough to allow the RC through when you are close-by. Boost here to instantly reach the belly and quickly hit RT. This will allow you to detonate at the right place and the plane will crash into the tarmac.

Arash can then be found reeling from the crash impact behind the rubble. Head towards him to trigger the video. You end up shooting him in the head after gathering intel about Perseus – which propels you into the next mission of the Black Ops Cold War Campaign.