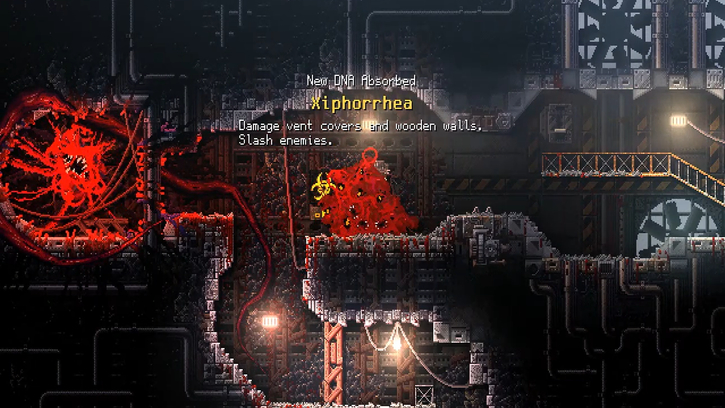 Ever watched a lovercraft-ian horror movie and empathised with the monster? Ever wondered what it would be like to have unbridled power and having to break free from humanity’s controlling grasp?

Phobia Game Studio’s 2D platformer horror game offers you a chance to play as a powerful monster fleeing the clutches of capture. This amorphous creature ravages through intricate maze-like landscapes and consumes humans to evolve and become a deadly force.

The game allows players to perform many cool functions and abilities when you play as the flesh-consuming monster right out of your worst nightmare. As you make your way through puzzles and labs, infecting more areas, you find that one ability helps you combat the guns and lasers that humans use against you.

Dashing in Carrion is useful in breaking through barriers, launching surprise flank attacks and getting through even the toughest areas of the map. But this ability is not easy to acquire or use. This guide will equip you with details on how to get and perform it.

To gain the power to break through walls and barriers you must first equip yourself with ‘Xiphorreah.’ You get this ability when you absorb the second DNA strand available as you progress through the game.

Once this ability is acquired, you can now break through barriers and launch surprise attacks on defending humans. Using the RB trigger on your console joystick, you can perform short but powerful burts that will take you through most walled-off areas in the game, giving you more chance to explore and consume humans to grow in power and size.

During combat, you might find yourself taking damage. This causes your monster avatar to shrink in size. The Xiphorreah ability is available only when you reach a certain size and your health bar is above mid-range.

We suggest that you take an alternative route and find more unsuspecting humans to attack and devour to regain size and strength. Then you will be able to use the RB button to crash through walls again.

But be careful, always be sure that you are not breaking into a highly guarded zone. Some areas in the game have over 5 defenders who will hold various angles and lay down fire.If you enter a highly contested zone, you will lose your life and will have to restart at the last point you uploaded your Biomass. These are not common and can be frustrating to go back several locations and replay areas you have conquered already.  But you can use this move offensively too.

You can counter fire in crowded areas by taking out humans in high platforms and then consume them under cover and then launch a fresh quick attack using the dash feature in the game. You can clear out 2-3 enemies using this if they are on the same level.

Try this out the next time you are stuck or want a unique way to attack opponents. This could lead to very satisfying, blood-churning results to quench you monster-horror game itch.