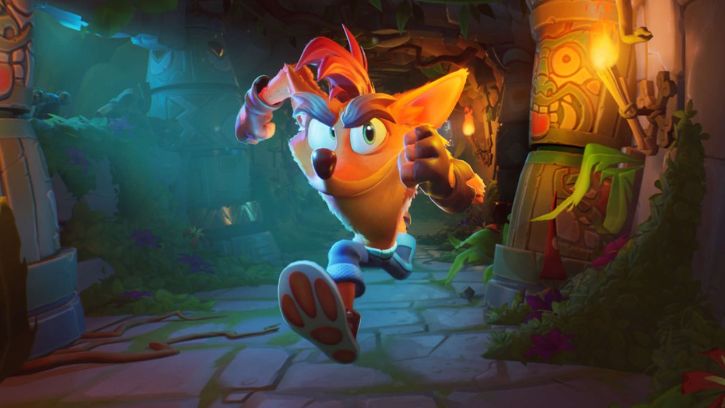 Mirror Mode is a game mode that is usually added to a variety of games to add some longevity to them. It is also a rather cheap and easy way to effectively create “new” courses from existing ones as inverting the levels add quite a bit of a different approach to them. The previous mainline Crash Bandicoot games did not have this mode, but Crash Bandicoot 4: It’s About Time has decided that it was time to have their hand on this mode, adding quite a twist to the levels.

Enter N. Verted Mode, Crash Bandicoot 4’s version of a mirror mode, but instead of just mirroring the levels as they are, the developers from Toys For Bob decided to have a bit of fun and added a lot of elements to make the levels a lot more fun and interesting. In this guide, we will be looking at how to unlock N. Verted Mode in Crash Bandicoot 4 and see what differences this mode brings to the levels found in the game.

What is N. Verted Mode?

As stated previously, N. Verted Mode is Crash Bandicoot 4’s version of a mirror mode, only instead of just inverting the levels, several changes are made to the levels to keep them interesting and new. These changes range from being only aesthetic to legitimately game-changing ones like game speed, and even gravity settings.

How Do You Unlock N. Verted Mode?

You unlock N. Verted Mode the moment you defeat N. Brio. In fact, during the boss fight, he gives you a glimpse of the N. Verted Mode when he throws out one of his beakers towards you. If you are having trouble defeating N. Brio, you can check out the guide over here for some tips and tricks on the boss fight.

What Do You Get from N. Verted Mode?

N. Verted Mode has its own set of Inverted Gems to collect so playing through them is a must if you decide to go for completion of the game. In later levels, the skins locked behind the stages will require more than 6 gems, making N. Verted Mode needed to unlock those skins.

The requirements of these Inverted Gems are pretty much the same as the normal Clear Gems with the difference being that the Hidden Inverted Gems are hidden in different spots than their normal counterpart. That and instead of collecting Wumpa Fruit, you collect Bumpa Berries. A minor cosmetic change, but a welcome one.

Other than that, you can expect the boxes as well as the Bonus Levels to be in the same spots as they were, so the real challenge comes in completing the levels again, with the gem requirements in mind, only in reverse and with special filters and conditions applied to the stages.

Flashback Tapes, Time Trials, and Colored Gems are not present when you play a stage in N. Verted Mode.

Quite possibly the most interesting N. Verted Mode, the game is modified in such a way that you are completely in the dark and the only way to gain vision is to spin similar to a bat seeing with sonar. It is a rather challenging N. Verted Mode to get through. A general tip is to continuously spin to give yourself vision as the moment you stop you lose a lot of reference points.

Luckily, however, some elements in the game are also highlighted, so you are not completely blind. Elements highlighted in red are enemies while boxes are highlighted orange. The high contrast helps in distinguishing boxes and enemies from the otherwise detailed environments as well.

An aesthetic-only change, The Hazardous Wastes’ N. Verted Mode comes in the form of a sort of laser light show, keeping with the rock show theme the boss fight has. The stages are a lot darker as the skybox is turned completely black, but also more highly-contrasted thanks to the neon highlight effect the characters and items have applied to them. The effect is a bit straining to the eyes so take a break or lower the brightness of your TV if needed.

Another interesting N. Verted Mode, the stages start off as black and white but when you spin, you let out a burst of color, painting over the black and white world. Destroying boxes also let out an explosion of paint, further filling in the stages with color. It is a very cool effect and also non-intrusive as the paint that you spin into the world just colors the world to its normal colors. One of the more beautiful N. Verted Modes and definitely one of my favorites.

Another aesthetic-only N. Verted Mode, Tranquility Falls’ levels are transformed into a watercolor painting making everything look softer when it comes to its color palette and having a bit of a sepia tone to mimic the color of Japanese paper. The filter used in this N. Verted Mode is really good and easy on the eyes, very similar to how the game Okami looks like.

Mosquito Marsh’ N. Verted Mode introduces the first N. Verted Mode that messes with the game’s settings. Aside from the old-timey filter it applies to its stages, the music is also changed, sounding more like ragtime music. The sound effects are also passed through a filter to make it sound like it is coming out of a crackly radio or phonograph. Not only that but the game speed is changed to be a bit faster, similar to how old cartoons had a bouncier and looser feel to them, and the action being a lot more fast-paced.

A very interesting N. Verted Mode which sees you adjusting your movements and pace a bit to match the shift in game speed.

A fun and vibrant N. Verted Mode, The 11th Dimension’s N. Verted Mode covers its stages with halftone dots, making the stages look like old comic books. Funnily enough, destroying boxes and spinning enemies bring out various comic book sound effects complete with the matching “Wham!” and “Pow!” effect bubbles. Although it looks cool, like The Hazardous Wastes’ N. Verted Mode though, the effect can be a bit straining to the eyes thanks to the dimension’s naturally bright color palette.

Another very creative and very vibrant N. Verted Mode, the Eggipus Dimension’s N. Verted Mode transforms its stages into a coloring book with its stages splashed in a filter where the environments look like it was filled in with crayons or pastel. Unfortunately, like the stronger filter effects, it could be too straining to the eyes. The sketchy effect of the visuals could also lead to boxes being obscured.

A rather reserved N. Verted Mode, Bermugula’s Orbit’s N. Verted has its colors washed out and a cel-shaded effect is applied to the stages. Not much going on here, but it is at least easy to play through as the colors are soft and the changes are minimal.

Another N. Verted Mode that changes the whole game feel of its stages, The Sn@xx Dimension’s N. Verted Mode submerges its stages in water with an underwater theme, making the stages look more like they are in huge aquariums rather than the space/futuristic theme it was going for. Going with the underwater theme, the stages’ gravity is reduced so everything is a lot floatier and like moving underwater, everything else feels a bit slower and more sluggish. Even the sound effects sound more muffled as if you were underwater.

Quite possibly the N. Verted Mode with the most changes, these stages feel like they are indeed new instead of just having a photo filter slapped onto them as the speed and gravity change will have you changing your style of play quite a lot.

The final dimension, Cortex Island’s N. Verted Mode transports you back to the past in its attempt to look like a video game from the ’80s or early ’90s. From its pixelated visuals, to its sound effects mimicking arcade games with bleeps and bloops, it even adds a score meter to the game, and breaking boxes and spinning enemies adds to it. It is a very neat N. Verted Mode that pays tribute to old school video games, possibly even being an homage to the aesthetic of the original Crash Bandicoot back in the PlayStation 1 era.

N. Verted Mode is a great addition to the Crash Bandicoot franchise. Not only does it add more replayability to the game, but it also adds quite a number of layers to the gameplay with its tweaks to the mechanics of the game itself.

Hopefully in the next game they replicate this feature, except in a way that you can choose what type of N. Verted Mode to play in because playing The Sn@xx Dimension’s underwater N. Verted Mode or N. Sanity Island’s echolocation one brings a lot more to how the game is played than just the color swaps or photo filters found in the other N. Verted Modes.