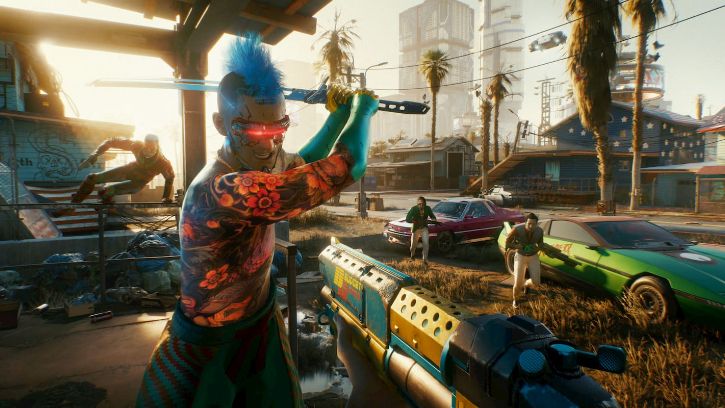 Dodging is an essential skill to have in Cyberpunk 2077. While some of these techniques can be used during melee combat, they can also be used during firefights to do some quick, evasive maneuvers towards cover, or if you are feeling aggressive, towards an enemy, dodging projectiles left and right.

In this guide, we will be looking at the several dodging maneuvers you can do and their applications while in combat so you can avoid damage and flawlessly get through a conflict unharmed.

How Do You Dodge?

There are a variety of ways on how you can dodge but most of these maneuvers involve the Crouch button and the Sprint button, or a combination of both.

If you are playing on a mouse and keyboard setup, both of these actions are separated into 2 buttons, both for toggle and hold purposes. On the controller, these settings can either be a toggle-able command or a button you hold down for them to continue to do the action.

These keybindings can always be changed in the setting menu if you feel more comfortable assigning a different button to them.

It is also important to note that some of these maneuvers require stamina and attempting to do said maneuvers without the sufficient stamina will have you either walking or standing still which would be bad if you are looking for a quick movement out of an attack.

Although arguably not a dodging maneuver, learning when and where to crouch will be a lifesaver to you. Ineffective during melee combat, crouching is more to be used in ranged combats as you can crouch behind cover to avoid gunshots

Take note that while you are crouching, you will be moving a lot slower so if you need to dash out of somewhere, make sure that you are not crouching. On the other hand, crouching does make your movement a lot quieter, so it is very useful during stealth sequences.

Straight-forward in its application, sprinting helps in getting away from an encounter in both melee and ranged instances. In ranged combat, you can use sprint to quickly change your position and create yourself a vantage point for you to return fire. You can also sprint closer to your target to close the gap if you have a weapon that is much more effective in close-range combat such as the katana or the shotgun.

As for melee, it can be used to completely defuse a fight and you can flee from your attacker so long as your sprint speed is much faster than your attacker.

This maneuver costs stamina so keep an eye on your stamina gauge because if you run out while sprinting, you will be reduced to walking speed and will need to wait for the stamina gauge to fill up again before starting another sprint.

A much more effective and stylish way to move from cover to cover, sliding enables you to be a bit more evasive by keeping your speed from sprinting while being a shorter target for attackers at range. It is also a great way to immediately transition to a crouch from a standing position.

When approaching an enemy from afar, this can also be used effectively as the sudden slide towards them can confuse enemies making for a stylistic finisher when going in for the kill.

Sidestepping is an effective technique in both ranged and melee combat. During ranged combat, you can integrate this into your sprints by sidestepping while you approach or flee from an enemy. This ensures that you are not running head-on towards an enemy, making for a trickier target to hit.

As for melee combat, these quick movements ensure that you dodge with just the right amount of distance for you to come in and hit the enemy yourself. Watch out for hooks and slashes that come from the side though as sidestepping will not dodge these kinds of attacks.

This maneuver costs stamina so keep an eye on your stamina gauge because if you run out when you decide to sidestep, you will be forced to strafe slowly.

Backstepping is similar to sidestepping, except this time you create a bit of distance from your attacker by moving backward quickly. This technique works well when you are against melee attackers and ineffective when you are faced with enemies with guns.

During melee combat, you can use backsteps to dodge attacks and create some distance, leaving the enemy open for a punch or shot if you are equipped with a gun. Be careful though as backstepping will be ineffective with lunging attacks, especially from katana-wielding enemies, as the distance you create will not be enough to dodge the tip of the sword.

This maneuver costs stamina so keep an eye on your stamina gauge because if you run out when you decide to backstep, you will be forced to move backward slowly.

An effective way to get closer to an enemy especially if you have a katana, dashing closes the distance a lot faster than sprinting towards a target when the enemy is a few feet away. You can also use this technique in conjunction with backstep by first backstepping and then dashing forward to deal a heavy blow to an unguarded enemy.

This maneuver costs stamina so keep an eye on your stamina gauge because if you run out when you decide to dash, you will be forced to walk towards the enemy.

The depth of Cyberpunk 2020’s combat is quite surprising when you get into it. There is a lot of movement involved and a flow so that combat stays fluid, especially when equipped with the katana. Learning how to use these dodging maneuvers and when to use them is very important as each combat situation that presents itself also has a way of evading them.

Whether it is through flashy dodges or through regrouping and finding cover to set yourself up for a better position, movement should always be considered when taking enemies down.