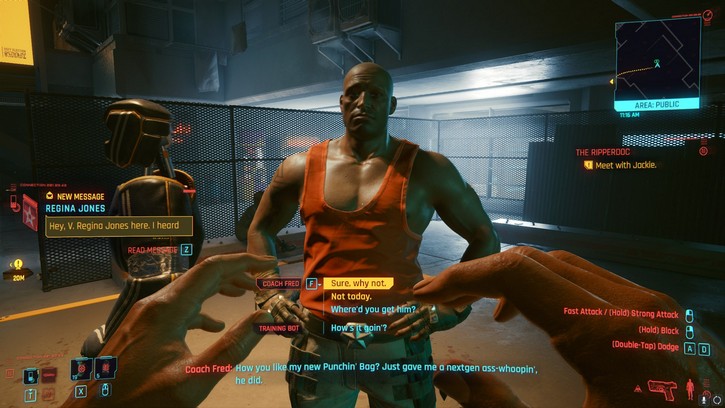 There are a lot of ways of acquiring legendary weapons or guns in Cyberpunk 2077. They are one of the most sought out things while playing the game and it will definitely make your life in the Night City easier.

This guide will focus more on how to get legendary weapons in Cyberpunk 2077 through vendors. While all the items listed in the weapon shops scale to particular levels, it is better to highlight the attributes rather than the raw numerical values of each weapon.

The 2nd Amendment weapons vendor is the closest one you can find among all the weapon shops. This is located near your apartment and is also near Coach Fred which is another vendor that will be talked about later.

The legendary Baseball Bat is a good weapon to have because it is a non-lethal weapon. This is important because of the objectives that require you to stop enemies rather than eliminate them. It does physical damage (obviously) with increased crit chance, crit damage percentage, bleeding chance. It also contains 3 melee mod slots like most legendary weapons.

You can buy the legendary Baseball Bat for 26118 Eurodollars.

The legendary version of the Unity power pistol is a heavily upgraded one from the first pistol you used in Cyberpunk 2077. If you liked how the Unity with its common version, you will definitely want to get this. The bullets ricochets off surfaces and has a ton of stat modifiers. It also contains a whopping 4 mod slots, a scope slot, and a muzzle slot.

You can buy the legendary Unity power pistol for 18142 Eurodollars.

The Iron and Lead weapons vendor is located way up north and is just near the port. You will need to drive all the way here if you have not been here already because the waypoint will not be unlocked yet.

The legendary knife is a fast but short melee weapon. It is underwhelming but if you are built for using these with the proper perks and attribute points, you can definitely make it work. It has 4 stat modifiers which contains stamina cost reduction while attacking which is extremely helpful. It also contains 3 melee mod slots.

You can buy the legendary knife for 11763 Eurodollars.

The legendary version of the DS1 Pulsar is extremely powerful and is also my personal favorite because of the fire rate. It has 4 stat modifiers including burn chance which will complement the fire rate nicely. You will have 4 mod slots to work with as well as a scope and muzzle slot.

You can buy the legendary DS1 Pulsar power submachine gun for 20664 Eurodollars.

The legendary Nekomata tech sniper rifle will work best for players who like to be more precise than going out with guns blazing. It packs a serious amount of damage because of the x3 headshot multiplier and you can basically ignore the DPS statistic here because this is a sniper rifle after all. It has a built-in scope and 4 mod slots you can work with.

You can buy the legendary Nekomata tech sniper rifle for 56638 Eurodollars.

The Straight Shooters weapon vendor is the second nearest weapon shop from when you started the game. It is near the All Foods plant that was part of your main storyline mission too.

The legendary defender power light machine gun is great if you rarely want to swap weapons when fighting. It is significantly harder to carry but if you can only hold 3 weapons at a time, it is great to have one with an insane mag size. It has 3 stat modifiers and contains 4 mod slots, a muzzle slot, and a scope slot.

You can buy the Defender power light machine gun for 44483 Eurodollars.

The Legendary DR5 Nova power revolver is more for precise players. Revolvers tend to have one of the highest DPS weapons in the game but it is more on how accurate you are in using them. It has a slow fire rate so missing shots will lose you a significant amount of damage.

It contains 4 stat modifiers and has a higher headshot multiplier (x2) than most weapons. You can add 4 mod slots, a scope slot, and a muzzle slot for this weapon.

You can buy the DR5 Nova power revolver for 22008 Eurodollars.

Coach Fred is the fighting coach you will see at the start of the game near the training bot. If you talk to him and finish the extremely short side job, you will see him sitting on the bench and ready to sell you some melee weapons.

The legendary Katana is another lethal melee weapon in the game. It is longer and much stronger than the legendary knife but also significantly slower. It has 5 stat modifiers which also contain the stamina cost reduction while attacking, and it is deadly when you get near a ton of enemies close to each other. You can add 3 melee mod slots to this weapon.

You can buy the legendary Katana for 18942 Eurodollars.

The Baseball Bat here is different from the one before as you can see from the stats but this one requires a higher level to equip from the previous one so it might have just scaled everything higher.

There are a ton of legendary weapons you can acquire that are not just from vendors so you can choose your weapons wisely and think about it first before purchasing these from the weapon shops. It takes a lot of time to gain Eurodollars and these prices are quite hefty because you might even replace some of these with better ones in the future. You can always store your legendary weapons if they become outdated and you do not want to throw it away.