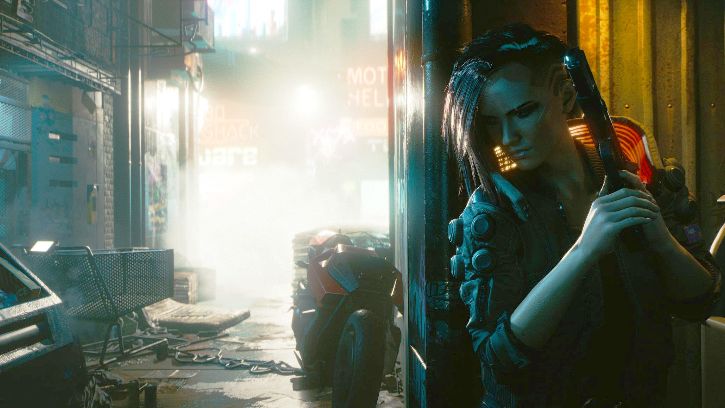 Peeking behind cover is a rather new feature when it comes to first-person shooters. It lets you quickly get in and out of cover while you are aiming down your scope or sights while keeping relatively safe from incoming fire. Cyberpunk 2077 employs this feature seamlessly with its cover system, leading to a rather fluid but familiar way to deal with enemies.

In this guide, we will be looking at how to peek behind cover in Cyberpunk 2077 and how you can use this feature other than just being behind cover while you wait for your enemies to reload.

Quick Navigation show
How Do You Peek Behind Cover?
Uses for the Peek Mechanic
1. Combat
2. Stealth
Conclusion

How Do You Peek Behind Cover?

Peeking behind cover is a bit finicky when it comes to Cyberpunk 2077. While some other FPS games let you peek freely or maneuver your gun from left and right while you are aiming, Cyberpunk 2077 attaches this maneuver when you are situated near a wall or behind a barricade while you are crouching down.

This means that you are automatically put on a sort of rail when you are up against a wall and when you try and aim from the edges of your cover, you will automatically lean out of cover with your gun cocked to the side, peeking to get a clean shot from the outside cover.

This feature only works when you start to aim down the sights or the irons (if your gun does not have a scope) so do not expect to do it free-handedly. Also, do not expect to do this with a melee weapon equipped and it will not work. You can also swap weapons equipped weapons while doing this under the cover. It can be a good tactic, especially with legendary weapons that have smart targeting and ricochet bullets.

Uses for the Peek Mechanic

Although a bit situational, this peeking mechanic is great to have as it gives you quite a bit more options when you are entrenched deep in an enemy’s base. Below is a list of situations you can use this mechanic in, some of it a bit unorthodox, furthering Cyberpunk 2077’s depth when it comes to its combat.

The most obvious use to this peeking mechanic is via combat. The peeking mechanic enables you to quickly get in and out of cover at a push (and release) of a button resulting in a much safer time for you to try and take enemies down.

It also enables you to get out of cover from quite a distance to the edge of cover leading to some potshot shenanigans while your enemies scramble to try and shoot you.

You can also use this to quickly throw out a grenade as peeking out of cover at least gives you a bit of time to assess your surrounding before throwing out anything. This would also avoid you throwing a grenade and having you accidentally throwing it to your cover, having the grenade bounce back to you.

A bit unorthodox since you will be needing your gun out, you can also use this mechanic during stealth sequences to peek behind cover and mark as many enemies as you can.

You can also use this mechanic to peek at unsuspecting enemies and they almost never catch a whiff of you while you spy on them from behind cover. Just try and adjust the distance you are from cover as peeking from way outside cover will have you be revealed by your enemies.

Although the implementation of the peeking mechanic is a bit odd, the fact that it is in the game is great as it eradicates the need to strafe left and right from cover, making for some odd movement when it comes to being realistic. It also separates itself from old FPSs of old like Counter Strike and borrows more from Rainbow Six Siege making for a more modern experience when it comes to FPS combat.

The fact that it incorporates stealth into an FPS game means that it also probably needed this mechanic to make these sequences a lot more fluid and definitely gives you a lot more options and maneuvers when it comes to sneaking around Night City’s world.