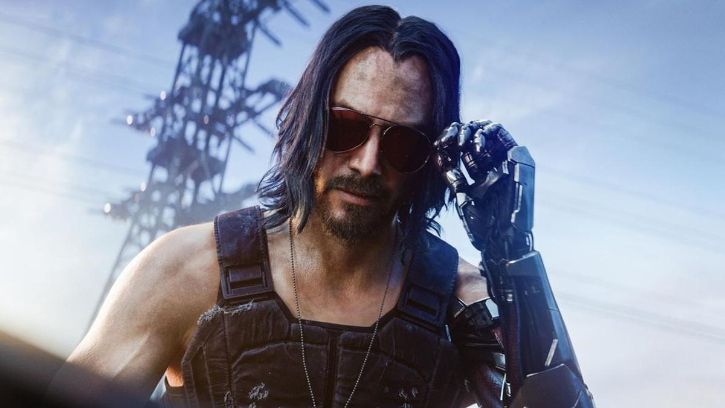 Spoiler warning! Do not read past these paragraphs if you do not want to get spoiled or want to keep the mystique that this character brings to the game.

How Do You Play as Johnny Silverhand?

The first time you play as Johnny Silverhand is after the game’s rather lengthy life path intro missions. After you successfully pull off the heist mission to steal a biomonitor chip from the Arasaka Corporation, V is forced to place the chip into his own neural interface slot to keep the biomonitor chip stable.

After an unfortunate double-cross by Dexter DeShawn (the person that hired you to infiltrate the Arasaka building), V finds himself being shot in the head and blacking out. The game then presents its logo and transitions into a flashback featuring a rock concert. Your character is only known as “Stranger” according to the subtitles.

After a bit more context, you finally learn that the person that you have been in the shoes of is none other than Johnny Silverhand himself. You then get to play as him as you pull off a demolition job to sabotage the Arasaka Corporation.

Johnny Silverhand, at least in this flashback, is equipped with an absolute beast of a pistol that blows off enemies’ limbs and can be charged to deliver a devastating attack that simply explodes enemies into a pulp. He is also quite durable, having quite a sizeable chunk of health, and health regeneration that would rival Wolverine.

He is basically an overpowered character with an overpowered gun the first time you play as him, giving you the sense of being an absolute juggernaut as you blast through enemies.

Who Exactly is Johnny Silverhand?

Johnny Silverhand is a legend amongst the aging citizens of Night City. Branded as a terrorist by most and a hero by a select few, he is one of the most infamous characters to walk in Night City as he successfully nuked one of Arasaka Corporation’s main buildings.

Little is known of the man himself, but his actions ring out years after they were carried out, making him quite the urban myth in Night City.

Do I Get to Play as Johnny Silverhand Again?

As you regain consciousness as V after Johnny Silverhand’s flashback, you are then briefed by Viktor, the ripperdoc that helps you out in the start, that by inserting the biomonitor chip into your neural interface slot and having a near-death experience, Johnny Silverhand’s memories start to bleed on to your own and entwine themselves to yours.

From this plot alone, and by how the story is directed, it would be safe to assume that you will be able to play as Johnny Silverhand once again after his initial flashback, either through several other flashbacks that would be available to get a lot more acquainted with his character, or when he finally tries to take over your consciousness.

With the length of the intro missions being around 5-7 hours and the flashback mission itself being a little over 30 minutes, we can expect a lot more Johnny Silverhand as the game boasts a play time that is well over a hundred hours including side missions that would more than likely flesh out Johnny Silverhand himself.

Keanu Reeves is an amazing actor and person, and the chance to personify him through a video game is a great draw for a lot of people. The fact that such a big actor would play a very lengthy role in a video game is still quite a shock to most people and the fact that he is incorporated into a first-person RPG is even more unbelievable.

We expect story-centric games like Until Dawn and Beyond: Two Souls to naturally have big-name stars, but games like Death Stranding and Cyberpunk 2077 is finally bringing in these actors to portray characters in complicated story webs and gameplay that would see them become beloved characters not only to movie buffs but to gamers as well.

It is then understood why people would be excited to play as Keanu Reeves, or in this case, Johnny Silverhand, even if though they do not follow games as he commands an aura not only beknown to gamers, but to those outside the media as well.