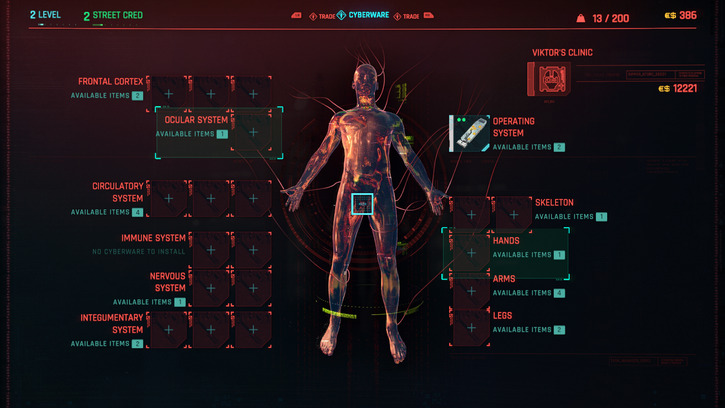 After a long wait, gamers finally can enter the futuristic world of Cyberpunk 2077. And it delivers on its promise of highly customizable, never-heard-of abilities that you can assign to your character and perform incredible feats as you complete missions or laze around the technology-driven, cybernetic open-world game.

Upgrading your Cyberware allows you to replace current body parts with hardware and software that adds certain abilities or amplifies them to superhuman levels. Aided by machines, you can live the fantasy of being part-man part-robot that our future seems to be heading towards.

How Does Cyberware Work?

You start off with empty slots across a variety of body parts (as shown in the figure) and you can add various abilities to them. Though you start off with very basic additions, as you explore the game, you earn enough Eddie to upgrade them to unleash the full potential of the many cyberware.

You can even find some additions through your missions, so remember to look at the loot you find. There are tiers to the cyberwar like with the weapons (will be more applicable in the online format of Cyberpunk 2077). There are tiers in the weapons like common weapons, rare weapons legendary weapons, etc. Similarly, as you progress in the game, you can unlock tiers in Cyberware too. This will upgrade current additions or give you the chance to unlock more sophisticated and expensive cyberware capable of truly spectacular physical and technological feats.

Where Can You Find Cyberware?

Ripperdocs are basically future doctors who rid your body of any neuroviruses (diseases in the Cyberpunk world) that can cause a range of physical symptoms. They also help you upgrade your cyberware and usually work with big corporations. But, they are scattered across the map and can be found in locations highlighted with small medical forceps.

Your first encounter with a Ripperdoc happens right after the first mission. The doc, named Victor, is an old friend and gives you two free upgrades in the form of ocular hardware that allows you to instantly scan objects and civilians and get some info and an upgrade for your right hand which we will discuss later.

Let us look at all the areas of V’s body you can upgrade and the type of upgrades you can choose.

Yes, every character has an operating system in Cyberpunk 2077 and like your computers, they constantly require upgrades. They are extremely crucial to the game as they enable your hacking ability, which is paramount to completing missions. The specialty of the game is that you can perform a mission with complete stealth and most missions are impossible to complete fully without some degree of stealthy gameplay. Unlike most games, you cannot fire and explode your way through opponents as even low tier enemies are robust.

With upgrades to the OS, you can hack people, enemy weapons, and just drop enemies from a distance by frying out their electronics. As you progress, you unlock some serious OS mods that allow you to reveal all enemies in an area, hack multiple electronics and completely disable an entire area and just stride through with no fear of retaliation.

Your Frontal Cortex helps your skill levels like aiming better, focusing on enemies better, and can increasing damage dealt to various types of enemies. It also allows you to gain a boost in RAM capabilities giving you a memory boost when you kill an enemy. But this cyberwar upgrade requires 7 intelligence points which can be gained only mid-way through the game.

You get three slots and you can add in abilities like Limbic System Upgrade which gives you a higher chance of critical hits over longer ranges and Mechatronic Core which allows you to take down drones and electronics easily.

The Visual center of cyberware upgrades allows you to scan an area and gain information on anyone and anything you see. Need to know the type of person you are conducting shady deals with? Just glance at them and you will get plenty of intel that will serve you well. You gain this during your first visit to the doc and will serve you well throughout the game.

These upgrades target your combat abilities and ability to deal damage to the opponents. Upgrades like Syn Lungs allows you to regain stamina faster with kills and Bioblastic Blood Vessels gives you better health regen when you down an opponent or deal severe damage during combat. These upgrades are rather cheap compared to the other ones on this list, ranging from 1000 to 5000 eddies.

You can pick these off after a few missions and after you’ve paid off Victor for the ocular upgrades. We suggest that you start your character build with Circulatory System upgrades as it helps both combat and health and allows you to choose multiple upgrades at the same time.

Your limbs are where things get interesting. Both hand and leg upgrades are crucial to sculpting your playstyle throughout the entire campaign. They provide massive upgrades to your combat, hacking, and stealth abilities, and you should be targeting getting them in as early as possible.

Different weapon types like Tech or Smart weapons are more yielding with hand upgrades (no upgrades yet for power weapons). The Ballistic Coprocessor cyberware helps you aim better when you try to ricochet bullets off walls or other surfaces onto enemies at odd angles. The Smart Link upgrade targets smart weapons and helps increase accuracy.

Possibly the best set of cyberware upgrades of any category on this list. These abilities just sound incredibly awesome and we can’t wait to try them out. Because they are very expensive, you can only acquire them later in the game. But they will drastically alter the way you can kill enemies.

For hand-to-hand combat, the Gorilla Arms upgrade will make your hits deal severe damage. The Mantis Blades upgrade equips your arms with blades that allow for cooler takedowns and quicker stealth kills. You can use the Projectile Launch upgrade to send objects from your environment flying at enemies, making you a pain to deal with.

Movement is a very underrated aspect of Cyberpunk 2077. It involves a lot of sliding, jumping, and running action which can all be taken to the next level with upgrades to the leg.

There are two slots and two available upgrades called Reinforced tendons (double jump) and Fortified ankles (super high leaps). They are very expensive and can only be acquired after a considerable number of missions.

Upgrades in this area allow you to improve stealth, movement, and aiming. These are crucial to the gameplay. Though not as flashy as the arm and legs, they will make your gameplay experience much better and are not as expensive.

The Synaptic Accelerator upgrade allows you to remain undetected for longer periods and the Reflex Tuner ability actually slows the game down when you are hurt to allow you to find cover and use a health stim.

There is one cyberware upgrade to your immune system and it allows you to take 8 percent more damage. This will be crucial in later stages as the game gets tougher and stealth is no longer an option.

Become a beast with these buffs primarily targeted at improving your player’s health and stamina. Upgrades like Bionic Lungs and Synaptic Signal Optimiser increase stamina and health while Dense Marrow and Micro Vibration Generator buff up your melee attacks and make them much deadlier. Initially, your melee attacks are very weak which restricts your gameplay style. With these buffs, you can be lethal at close range too.

This guide details most upgrades you can get and with this information, you can make informed choices on what you want your character build to look like. It makes it easier to plan and how you will spend in-game currency and not make hasty decisions on the doctor’s chair.