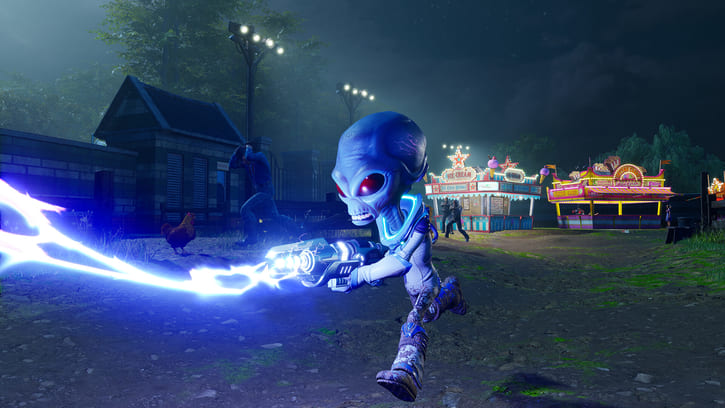 Destroy All Humans! is THQ Studios reboot of the classic of the same name. A game about an alien invasion of earth where you play as the alien. A surprise hit in 2005, this reboot offers better graphics and improved gameplay with the Unreal Engine for combat performance. Being a shooter with futuristic weapons, there is a lot of emphasis on visual elements to spruce up in-game visuals.

The weapons and Crypto 137’s abilities are all visually fantastic and are an upgrade on the original. The game has an alien UFO saucer that has additional combat features. The game has a stealth aspect and a GTA-esque rampage element to it, making it compelling, intense and funny. But does this mean that it will take a powerful computer to run it?

For a game with new graphic elements, the game does not require an expensive PC or high graphic specifications. Released simultaneously on consoles too, this game is aimed at fans of the older series and to attract a new audience to the successful franchise. The studio has opted to make the game as true to the original and keep the original look of the game.

When playing on PC, the game can be bought on Steam and can be run on a mid-range system played at a low graphic setting. This takes away from the visual additions and improved graphics but guarantees players with mid-range PC’s to enjoy the story line without any hiccups.

According to the official game website the minimum PC specifications to run the game is a 64- bit Windows 10,7,8 Operating system paired with a decent processor. The game requires a 3.5 GHz processor like the Intel i5-4690K or AMD FX-8320 to play the game at its lowest setting without compromising too much on performance.

A NVIDIA GeForce GTX 960 graphics card or equivalent like AMD Radeon R9 290 (or 280) is required to run the improved visuals of the game.

The game requires a dedicated graphics mid-range graphic card to facilitate an expansive world with a lot of NPC’s.

We recommend that you try and play Destroy All Humans! on a computer with higher specs than the minimum requirements. To run this game smoothly and experience the alien weaponry, saucer combat and third person gameplay we recommend a PC with Intel i7 4th generation processor.

This will give you a great gameplay experience and do justice to the renewed graphics of the original. The game has a 6- 10 hour long gameplay and for people doing marathons, a PC with a higher spec might be able to run smoothly throughout with no tearing in frame rate when a swarm of humanity descends upon you.