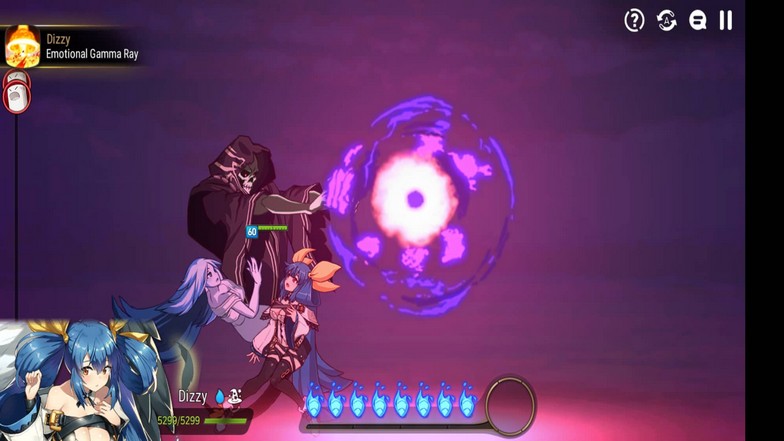 Dizzy is the only ice unit in the Guilty Gear x Epic Seven Collaboration. She is the ultimate debuffer unit that renders the enemy useless by reducing their speed, attack, and applies reduced hit chance. This article will teach you how to build Dizzy in Epic Seven and whether to pull for her or not.

The ultimate debuffer unit with 100% to land its debuffs on all targets. Dizzy is mostly used for PvE content. Although she is only great for clearing Abyss and most Labyrinth bosses, she can also be used on Wyvern (but not recommended).

Dizzy is a little bit irreplaceable in clearing the hard floors on Abyss. She also does decent damage because of her AoE attacks. Her most annoying and strongest attack is her S3. It is like an improved version of Politis but they both do different things.

She has a lot of holes in her kit. In PvP, the AoE attacks can trigger counters on some strong units and as well as give more focus on certain units. Her S3 is good in PvP if you can get it off against a team with immunity but it will rarely happen.

Even putting a maxed-out Iela Violin on her will not be enough to strip the buffs from the enemies. Teams usually have a barrier with immunity so even if the 80% hits, there will be a chance that it dispels the barrier. She has little to no strengths when it comes to higher PvP leagues.

She has a low base speed and she needs to be first in most situations because of her kit.

There are multiple builds for her depending on the situation. For the overall build, you would want her to be as fast as possible without sacrificing that much toughness. With at least 230-250 speed, it can be viable for challenger PvP and good enough to do all PvE areas.

For a speedy Dizzy, you would want to have around 15k HP with 1300 defense or more. As long as you reach that threshold of effective HP, you can survive most cleaves and single target attacks in PvE. Use artifacts like Iela Violin, Abyssal Crown, or Tagahel’s Ancient Book on her.

For a counter Dizzy, you want the counter set and any other 2-set to get the following stats. You want her to be super tanky with at least 20-22k HP and 1400 defense. Speed does not matter that much and you can get away with around 150-160 speed. Get as much effectiveness on her as you can as it revolves around stunning the enemy.

Around 160% effectiveness is good but a higher number would be better. The counter build needs the Abyssal Crown to be effective and Sira Ren would be the next best but not reliable enough. Iela Violin could also be annoying for counter Dizzy but it is quite a niche role. You can only bring her on Iela Violin in RTA if you know they are bringing important buffs like Immunity and Defense buffs.

Overall, counter Dizzy is better on arena or guild war defense but it is not the best. It is just annoying to play against.

To use Dizzy efficiently in PvP, you need to have a striper taking the first turn. Units like Cerise, Fairytale Tenebria (on Iela Violin), Hurado, and any unit that removes debuffs with a good base speed. You would want a full strip on enemies including comps that have Barrier and Immunity together like Fallen Cecilia and Last Rider Krau.

The problem with using Cerise is that she also applies Restriction so you will not be able to use Soulburn to use S3 and S2 at the same turn. It basically renders the S2 useless unless some units were able to resist the Restriction debuff.

For PvE comps like the Labyrinth (hell difficulty), you can always bring Dizzy with a healer and two DPS. Dizzy fills the role of another support or healer but deals more damage and helps with the mob clearing. Karkanis will be easy just because of Dizzy since you will be able to dispel the stealth on Dizzy’s turn.

A sample team composition would be Dizzy (speedy Dizzy), Basar, Challenger Dominiel, and Vildred (replace with any good cleaver). In this team composition, Basar goes first and he has purely speed gear. He strips the enemy team with his S3 and Vildred helps outspeed the enemy with his imprint. If you do not have any imprints, you can use any cleaver like Blood Blade Karin, Judge Kise, or Schuri (for the speed imprint).

The comp relies heavily on Basar’s speed and effectiveness. If you can reach around 280-290 speed on him with decent effectiveness, you can reach the Champions League in the arena by mixing this comp. You will have to avoid Roanas and Tempest Surins because they are prevalent in arena defenses. Overall, Dizzy is hard to bring in the arena above Challenger rank.

My Current Build on Dizzy

For my Dizzy, I slapped most of my good speed gears on her and used her to climb Abyss floors 100 and above. She has 278 speed with around 15k HP and 80% effectiveness. It does have a 44% crit chance which could go to other stats but it is just a test run because Dizzy is not that useful in PvP.

278 speed is a bit overkill for PvE but I also tried using her in PvP Challenger. Although it works a few times, it is just because of the speed gear. I dodge all the Roana, Fallen Cecilia, and Tempest Surin comps because they are tough to beat if I force Dizzy in the team comp.

If there are elemental advantages I can exploit, I change Spectre Tenebria and Challenger Dominiel with other units to counter them. The role of Dizzy is clear. While Fairytale Tenebria controls everyone in the enemy team, Dizzy slows them with her debuffs and even pushes their combat readiness back.

The problem here is bruiser comps like Roana and Tempest Surin. If Fairytale Tenebria counters, Roana basically heals the whole team back up to full. If you do even more damage with your debuffs, Tempest Surin will cleanse it and interrupt with an S3 that silences your team.

Charles will also be a problem with my comp and I do not have enough speed gears to build another striper that outspeeds my Dizzy’s speed build. It will take a lot of gold to swap each weapon up or refresh the arena opponents so it is quite inefficient to build Dizzy in PvP since she is weak to a lot of units.

Should You Pull for Dizzy?

If you are still deciding whether to pull for her or not, you should take a look at what you need. If you are struggling with clearing Abyss or even doing Labyrinths on hell mode, you might need to pull for her. Limited units rarely get buffed until they are reintroduced into the game so if you want to miss out, you can save your Covenant Bookmarks for other units or collaborations.

If you pulled for Dizzy, you know she is already worth it for clearing PvE alone. She is a limited unit from the Guilty Gear Epic Seven collaboration and you will never have a chance to get her again if they decide to stop rehashing collaboration and start introducing new ones.