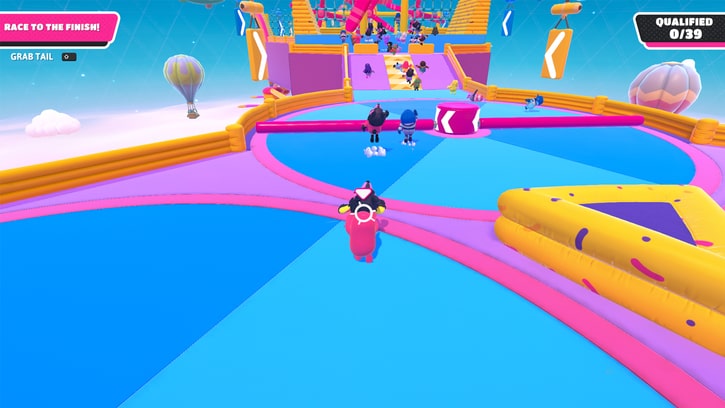 Whether you were the victim of it, or did it by accident and want to know exactly how to push and pull in Fall Guys, in this blog, we will show you exactly that.

If you have played Fall Guys already, you would know that there aren’t many ways you can disrupt other players’ performance and slow them down. However, there is this one method that is actually quite fun, and if you feel like you want to annoy the opposition or even get them eliminated, feel free to make use of it.

Be careful though as sometimes, you could become the victim of your own efforts, and that is something that you definitely don’t want to happen.

First and foremost, this would be different depending on the platform that you are using. If you are on PlayStation, you will have to hold down R2 when you are near a player. Then, you will notice how your character get a grip of the opponent for a couple of seconds. There are of course added benefits to holding down an opponent which you will be able to explore in more detail below.

If you are on PC, however, by default, you can grab onto an opponent by clicking the left mouse button when you are in close proximity to your opponent.

Benefits of Pushing and Pulling Players

If you are playing solo against 59 other players in a general game of Fall Guys, there aren’t really any added benefits to yourself besides being annoying and purposely trying to ruin someone’s game. Don’t get us wrong, that is quite hilarious, and a lot of people do it just for fun. Do be careful though as you definitely don’t want to slow yourself down and get eliminated by trying to ruin someone else’s game by dragging them down.

As you probably already know, Fall Guys offers plenty of game modes and maps that the players can enjoy. Some of them, however, include maps where you are going to be randomly allocated in a team with players from your lobby. In such a case, you need to be a team player and help your team win, in order to qualify for the next round, and get a step closer to winning the game.

Additionally, in the very fun in our opinion, tail-chasing game mode, where players are allocate a set number of tails per team, getting hold of an opponent with a tail, is a great way to help your team win. This way, you can slow down an opponent and allow your teammate to come in close, and steal the valuable tail from the enemy.

As the game currently stands, there aren’t a lot of vital benefits to pulling and pushing opponents, however, we are sure that in the near future, this particular skill will come in handy. We believe that it would be quite funny if a feature was added where you could perhaps tackle or even throw aside an opponent.