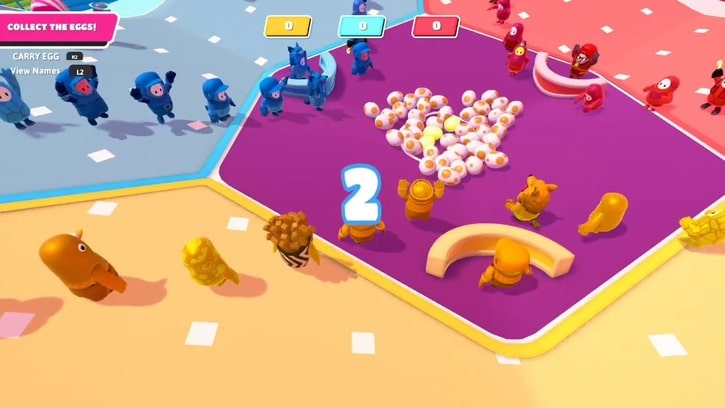 Have you had the chance to play Egg Scramble on Fall Guys where you are paired up with a couple of players against two other teams? Yes, we are talking about the egg game mode in Fall Guys.

If you have played it a couple of times, you were probably absolutely clueless as to what you were supposed to do and wasn’t much of a help to your team.

However, now that you are on this blog, we will not only show you how to throw eggs in Fall Guys, but also give you a couple of strategies that you can apply to your next game of Egg Scramble and ensure that you qualify and are one step close to winning a game.

Grabbing and Throwing the Eggs

There actually isn’t a dedicated button or a setting for throwing eggs or as a matter of fact, throwing anything in Fall Guys. However, there are things you can do to actually throw the eggs in your desired direction. First and foremost, you must first get hold of them. In order to do that, either press the left mouse button if you are on PC or hold down R2 on Play Station.

Once you grab the egg, head towards your base and the goal here is to jump and then dive immediately while letting go of the egg. This will cause the egg to fly off from you.

In order to do that, press Square on PS4 or CTRL on PC while aiming towards your target. Then, let go of the egg by pressing R2 on PS4 or Shift on PC while you’re in the air.

Note: Try to execute this move when there is no one in front of you to block you from successfully launching the egg in your desired direction.

Ultimately, the goal of egg scramble is to have as many eggs in your team’s basket as possible before the time runs out, and the team with the least eggs gets eliminated.

Since it’s a team game, everyone must do their bit in order to help their team secure one of the two spots and qualify for the next round. So, below, we will give you a couple of tips and tricks on being a better team player in Egg Scramble.

1) Focus on the Golden Eggs First

If you haven’t noticed already, there are three golden eggs right in the middle of the pile of all the eggs. Each of the three eggs counts as three normal eggs or three points, so getting you hands-on at least one of them can easily bring up the score of your team above everyone else.

The only problem is that everyone will be after them. However, you can push and pull players and cause them to drop the egg, giving you enough time to steal it and throw it in your team’s basket.

A great way to increase your teams’ total score is by stealing your opponents eggs. The best time to do that is while everyone is focusing on getting eggs from the middle as there will be fewer people defending the eggs they already have in possession.

If you have enough eggs in your team’s corner, stop trying to get your hands on any more eggs and rather try to defend what you already have. It’s surprisingly easier as all you need to do is shake down an opponent and they will drop the egg.