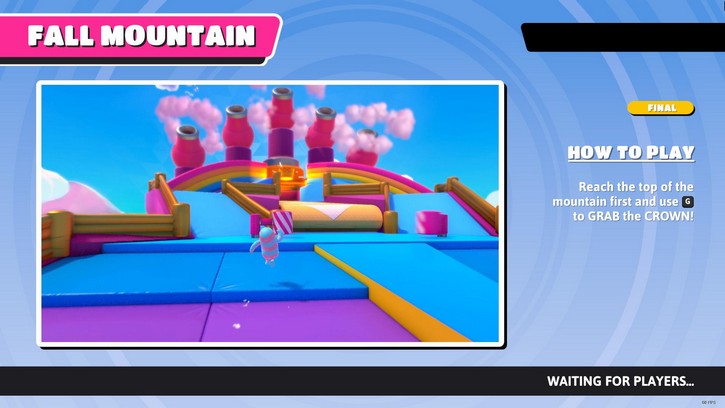 One of the most frequently played final stage in the game. It is usually played as the final stage because it can cater to a big number of players left when entering the 5th and final round. The stage mechanics are simple but it is hard to remain focused on everything that is happening which is important in winning a stage like this.

The goal of the stage is to be the last one surviving and the stage is filled with multiple floors where you try not to fall down into the slime. Each level has the same amount of floor tiles and every time you step on a floor tile, you will have about a second to move to the next floor tile until it disappears.

There are multiple strategies to try and win the stage and it is heavily dependent on how many players are still alive. The first strategy is trying as hard as you can to stay on the highest level at all times. Players usually combine this with the jump strategy where they jump at every tile to buy them more time in surviving in their current level. It is effective when playing against players who try to jump down immediately and remove a good chunk of real estate on the bottom floors.

You should train your awareness when jumping on every tile. Make sure you also look at the floor below you instead of what is around you. Once you realize that you have little to no room left to jump on your current level, try to move down a level or two safely by checking for floors with enough floor tiles to work with.

When you try to move down a floor, avoid jumping at all times and only jump when necessary. Never use the dive button when going down a level because you will not recover from it. You can use the dive button when you are trying to reach a floor tile that is two tiles away from you on the same level. You will only have a split second to move to the next tile after landing from a dive so remain calm and avoid diving again to recover.

The second strategy is to immediately fall down to the last 3 levels of the Hex-A-Gone stage. Remove as much floor tiles as you can especially in the middle and work your way through the last level using the jump strategy to buy more time. Players on top will keep fighting with each other for space and most of them will eventually fall.

Once they fall, they might fall straight down to the slime if they are in the middle. This strategy is extremely risky because if every remaining player delays time with the jump strategy, you will lose first. Refrain from trying to overtake players to make them fall down during the middle of the stage. This just means that both of you will suffer more by losing more floor tiles to work with.

With this logic, you should try avoiding players as much as possible so that it does not happen to you. The more experience you get in playing this stage, the more you would know which strategy to use at certain points of the stage. There are definitely players who just run around trying to avoid falling without any strategies in mind and they can become very dangerous in sabotaging others without knowing.

Remember to always switch it up between the jump strategy and moving into a more favorable level. Even if you stay on the top perfectly with the jump strategy, you will eventually run out of floor tiles. Once you look down and check for a possible landing spot, there might not be a great spot to fall down to. This is why awareness is key and the best way to improve it is through experience.

How to Win Fall Mountain

The Fall Mountain final stage is a race stage where all the remaining players will go through a long obstacle course and find their way to the end and win by being the first one to grab the crown. This final stage has the most luck involved in any final stages in Fall Guys.

Players will first have to go through some sliding doors and what makes this unique is that there will be 5 cannons constantly launching balls throughout the stage. Since this is a mountain and all the players are going through an upward slope, these balls are harder to dodge because they will be rolling down faster.

For the sliding doors, just make sure you pick the side where the balls are not incoming. The falling ball can make the sliding doors spin the opposite direction and if you choose the wrong one, you will get setback far enough that you will not be able to win anymore. To win this stage, you will need a perfect run and getting hit immediately at this stage with a ball will guarantee a loss.

As you go through the sliding doors, keep going up the slope and you will encounter some spinning hammers. These hammers spin quicker than the one in Slime Climb so be more careful. Time it perfectly and enter when the rotation of the hammer is at the 6 o’clock position. It does not matter which side to choose to go. As long as you are avoiding the falling balls while trying to go forward as linear as you can.

Once you go through the spinning hammers, there will be 3 ledges to jump to and everything should be easy from now on and basically the winner should already be decided at this stage. Keep moving up and just time your jump perfectly when the crown is within reach and quickly grab it.

Be careful and watch the progress of the other players and decide if you want to risk and jump earlier than usually if you have to. If there are other players who finished with you and the crown is not yet down, it will be all about timing. Avoid trying to push or pull players because you might cause both of you to lose and give other players a chance to grab it instead.

How to Win Jump Showdown

The Jump Showdown final stage was first just a survival stage when it entered the game. They made it into a final stage and this time they added a new feature in the stage. Previously, the stage does not involve any floors collapsing and players only have to focus on the two rotating poles.

The goal of the game is to survive as long as you can until you are the last Fall Guy standing to win the crown. There are two poles that will keep rotating on the circular floor stage and the lower pole will increase its speed as the stage progresses. Floors will begin to shake before collapsing and are divided into colors. You will have ample time to switch between floors while this is happening but you should be careful with the rotating poles before switching.

The strategy here is to always pick the side where there are more floors to go to without jumping. It will be easier to focus on the poles and you would not have to risk jumping and diving when the floor you are on is collapsing and you are one floor division away. Try to stay in the middle while avoiding players when jumping to prevent being bumped.

When the stakes are high or the lower pole or sweeper is getting extremely fast, you can position yourself from the left side of an enemy player and grab him as the the pole sweeps everyone off the floor. You will have a split second to jump after the pole hits the player and it will give you a chance to eliminate the player on a 1v1.

How to Win Royal Fumble

The Royal Fumble final stage is almost like the Tail Tag team stage but with a different map and only one tail to secure. It is a free-for-all game of tag and the last player with the tail gets to win the crown. Strategies depend highly on the number of players in the game.

There are two main strategies to go for when playing for the tail. The first is to always keep catch the tail no matter what. The second is to wait and analyze each player and when there are about 20-30 seconds left, you try and go for the steal and hold it until the time runs out.

The first strategy means that you will constantly flank players with a tail while hoping that the other players or chasing him from behind. The next problem is escaping the crowd after stealing the tail. You should familiarize yourself with the ramps, slopes and the rotating plates at both sides of the stage.

Most of these players will have a hard time jumping from the rotating plate to the ramp so this will be a good strategy to do when holding the tail and avoiding other players from catching or flanking you. Keep using these rotating plates and keep running up and down the levels by using the ramps as frequently as you can.

Avoid jumping and diving from a high level so that your character does not trip. You should be able to keep track of everyone from the upper level and decide which direction to fall down. If there are more than 6 players playing on this stage, the second strategy will be a great way to secure the tail but harder to time.

Dealing with multiple players chasing the tail brings a higher risk in stealing the tail. Imagine stealing a tail from the player in front of you and just to have it stolen from the person behind you. This happens frequently if there are too many players on the stage so it is a matter of timing and if you are lucky, you could even get away with stealing the tail and get to a ramp immediately.

Wait until the last 20 to 30 seconds and try to go for the tail after knowing which direction to flank from. Hopefully, you get to time it perfectly and steal the tail just as the time expires.