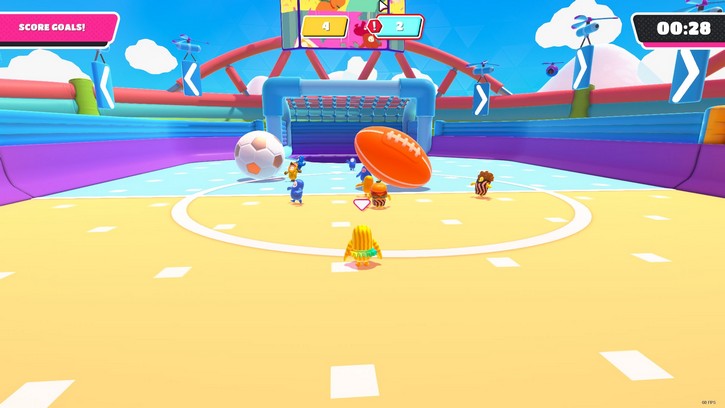 Learning how to win team stages in Fall Guys can be hard as you need to develop chemistry without communication. Here are the best strategies you can use for each stage to help you win more in these team stages.

How to Win Hoarders

The Hoarders stage is always a three team competition with the red, blue and yellow team. Each team should recover as much balls as they can by pushing them towards their respective side.

The strategy here is to look where all your teammates are going. Make sure to spread around the stage and do not use more than 3 players to secure a single ball. If you are going for steals, look for the farthest ball near the wall and roll it towards your base while hugging the wall. Use the jump and dive strategy when trying to hit the ball and you can make it bounce off the wall if there are players trying to block you.

If you want to defend and keep the balls on your side, the best way to defend it is by going in the middle and check if there are balls exiting your side. From this angle, it would be much easier to bring the ball back to your side with just with push. You will also have a better vision of seeing what is happening around the stage. The only goal here is to not be the team with the least number of balls. You can focus on one team that has the least number of balls and keep stealing from them.

How to Win Tail Tag

Winning a game of Tail Tag involves having a tiny bit of luck and great team chemistry where everyone is spreading out perfectly in the stage. The stage has multiple levels with spinning hammers, slime slopes and a square conveyor belt in the middle where most of the players will be running on.

Your goal in this game is just to get a tail for your team and hold it until the timer runs out. The best strategy for finding an easy target is to camp the middle where you barely touch the conveyor belt. Once you are in position, focus on the side where the conveyor belt is going and wait for someone with a tail to intercept.

This is a great strategy because of how players will eventually get cornered on the top level and they will have to jump to the middle and land awkwardly on the conveyor belt. The strategy to use when having the tail is to follow low populated areas and to keep following others with a tail even enemy players.

This gives you the opportunity to make the player chasing you switch targets. Remember to always use the levels to your advantage and avoid jumping on the conveyor belt and just walk off the ledge towards the slope when trying to fake out other players.

Do not worry about the start of the match. Scoring for the team in this game is highly volatile compared to other team games. Focus on trying to secure the tail near the end of the timer with the strategy above. Help your teammates with a tail by grabbing players who are chasing them. Remember that you can also steal the tail from teammates who are in trouble.

How to Win Hoopsie Daisy

The Hoopsie Daisy is another stage where there are three teams competing against each other. The goal here is to secure as much hoops for your respective teams by jumping into them. The hoops spawn randomly across the stage and there is even a chance of a golden hoop showing up and give 5 points.

Most of the golden hoops the show up are in the middle of the stage with the conveyor belt ramp. The best strategy here is to find a place within the stage where there are less teammates around. Once you have found the spot, make sure to be as active as you can in spotting hoops that you can definitely reach within your area. As long as your team splits around the stage, you should have no trouble in securing first or second place for the team.

Grabbing opposing players who are trying to take a hoop in front of you is also a good idea because every one has to jump into the hoop to secure it. Practice timing your grab when they jump so they get pulled back immediately and sometimes even stagger for a second.

How to Win Egg Scramble

The Egg Scramble stage will put your grabbing ability to the test. There will be a total of three teams for this team stage and the goal here is to not have the least amount of eggs on your side of the stage. This means that you do not have to finish first and you only have to keep one team down which brings me to this strategy I am about to explain.

The strategy sounds evil but you only need to block an enemy team who are currently have the least amount of eggs in their basket. You will notice how some other players gang up on the small team and just keep stealing from them until you see them at 0.

The next strategies will be about trying to keep your egg count high as a team. Focus on defending by waiting for opposing players to grab and egg from your basket and wait for them to jump. Time your grab with their jump and they will just fall over. Make sure you protect the golden egg if you have one in your team’s basket as it counts for 5 points.

The trick for stealing eggs is that you have to grab and release the egg as you jump. This prevents you from throwing the egg up into the air when you get grabbed. Keep doing this until you have reached the last step inside their basket and just jump with the egg. If you throw the egg up from this step, it might hit the hammer and it will go right back to their basket so be careful.

How to Win Rock N Roll

The Rock N Roll stage involves more teamwork than the other stages. The goal is to push the ball up to the end while crossing obstacles such as poles and road bumps. The Rock N Roll stage is also a three team competition and you will only need to be at least second to qualify for the next round.

The most common strategy here is to keep pushing the ball at the start and at around 40-50% of your team’s progress, you should try heading towards the finish line and delay the other team’s ball from falling down the net. It is quite easy to block the ball from rolling down especially if it is hugging the wall. You only need to block it by grabbing and refrain from jumping if you have a good position in front of the ball.

Make sure that you have enough players pushing your ball before going for the other team’s ball. Most of the experienced players will know this strategy and some might even just head straight to the finish line from the get-go. Again, the strategy is keeping to keep uniting against the team with the least progress.

How to Win Jinxed

The Jinxed team stage starts with one random player on each team having jinx. The goal is to be the last team standing without a jinxed player. The way players are jinxed in the stage is by having other jinxed players grab another player who do not have it yet. From the start, both teams only have 1 jinxed player but it is also possible to jinx teammates.

It is a good strategy to grab your jinxed teammate to jinx yourself at the start and spread it faster towards the enemy side. There are multiple obstacles in the stage and the most notable one is the high level rotating plate in each of the team’s side. Most people will try to camp the tiny ring in the middle where it does not rotate and wait for opposing players to jump towards the rotating plate before they make their move to escape.

The strategy here is to wait for someone to chase them away from the middle and they will be forced to jump off the plate. Wait for them below because this will be the perfect chance you can jinx them because they will fall down on the floor after doing that jump.

If you decide to use the strategy where you would be the last player to be jinxed, you should be confident in your ability to look around for possible flanks when players are constantly chasing you. You should also be creative with the obstacles and master the art of jumping without getting staggered or falling down.

How to Win Fall Ball

The Fall Ball stage is kind of like the Fall Guys’ version of Rocket League or Football. The only difference is that there will be two balls active at a time. The goal is to have more points than the enemy team and if the game is tied, there will be overtime. Sometimes, after a few scored goals, a football would appear which can be harder to push or shoot.

If your team is down extremely big, there is a chance that a golden ball would appear where it can be scored for 5 points. It is a weird feature which makes it unfair for teams that have the lead secured but it keeps things interesting for all players.

Most players will just go after the ball at all times so make sure you have someone to guard your net. Treat this stage like football where you have multiple positions spread across the stage. Most of the time, players will throw their characters towards the ball at the same time and cause the ball to scramble. This will be the perfect time for you to score a goal. Be opportunistic and watch for angles that are clear and wait for the ball to come to you.