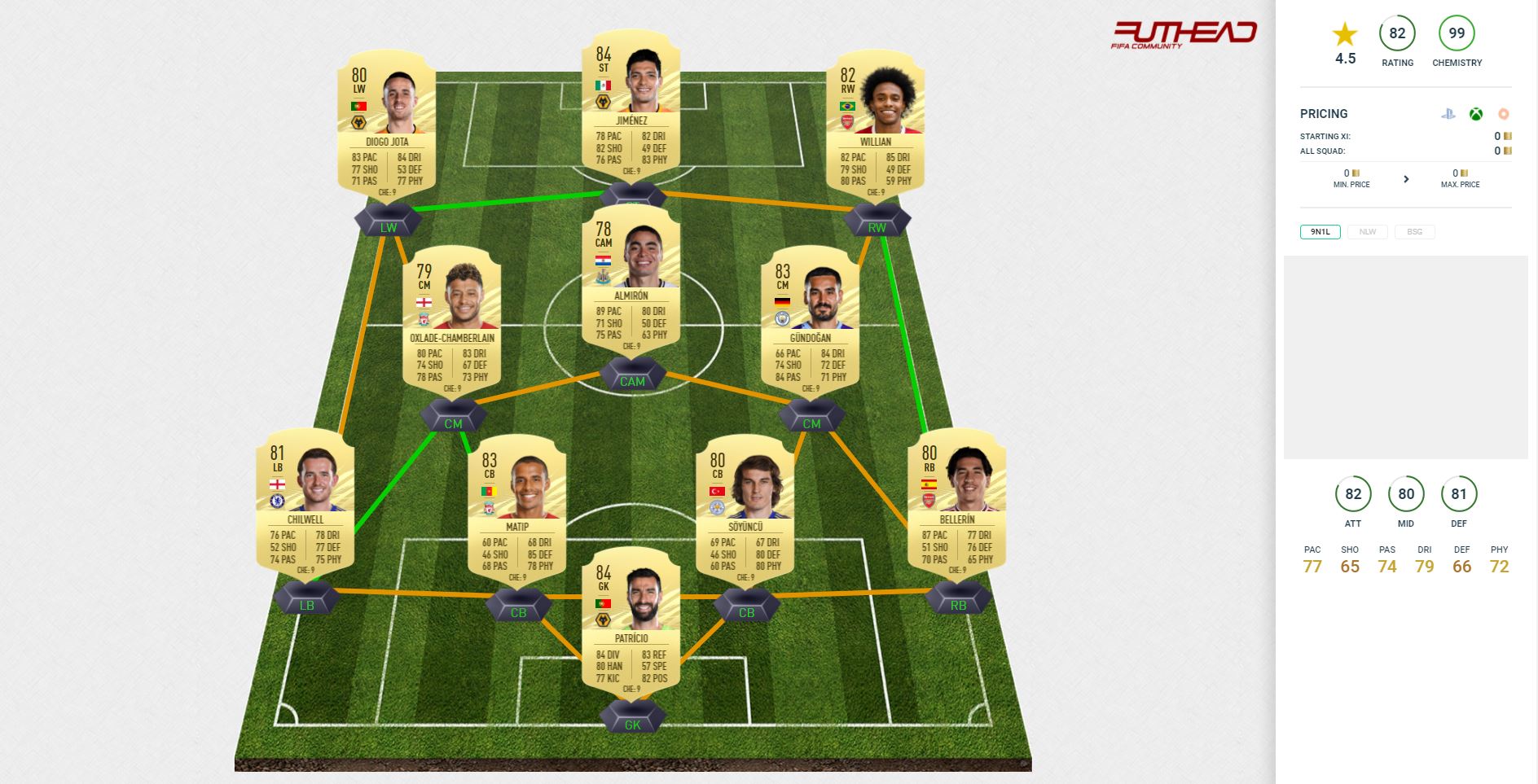 Building your first FUT squad is crucial to success every year in FIFA. By choosing a league and focusing on players who play there. You ensure higher chemistry and a higher overall rating which can help you in squad battles and games against other players.

The Premier League is an excellent league to build your squad from because of the high quality and variety of player nationalities available that allows you to build multiple permutations and combinations of players from various countries across the pitch.

In the beginning, when you are short on coins, most gamers aim to get the best squad at the cheapest price possible. Being an expensive league, it is no easy task to build a premier league – based team. But, it is still possible.

This is a list of top players who are surprisingly cheap for their in-game statistics and can help you really take over games and dominate opposition without spending too much cash. Their cards will offer you much more than what they cost and will be real value-for-money choices this year in FIFA 21.

This Portuguese shot-stopper has proven himself as one of the best goalkeepers in the world by helping a very underrated Wolves side to finish 7th on the table. His team conceded the least number of goals outside the top four, even fewer than Tottenham Hotspurs or Chelsea. This was mainly due to the stability provided by Rui Patricio between the posts.

On the list of the top 20 keepers in the world, it is a surprise that a player of his quality and experience is on this FIFA 21 FUT build. His card has some amazing stats with his Reflexes and Diving being exceptional.

He fits into a variety of systems and costs a measly 3000 – 4500 coins currently on FIFA 21 FUT across all platforms.

This wily Left-Back recently made the move to Stamford Bridge and is one of the better players on the left side of defense in the league. Boasting of an 81-rated card, this player even received a 85-rated IF (In Form) card this week after his move to London. But his normal card will be overlooked by the majority this season in FUT as it looks unremarkable at first glance.

With 76 Pace, 78 Dribbling and 77 Defense he offers a lot going forward in terms of his ability to beat a man and swing in a cross. Crosses, as we know, is overpowered this year. Most goals in FUT are pacey full-backs pinging the ball into the box with strikers nodding it in with atrocious, almost inhuman power with their foreheads.

He fits into this and can be used to exploit the header meta in FIFA 21. Plus he costs only 2600-3500 coins on the game, making him one of the cheapest 81-rated defenders.

Part of the title winning Liverpool team, this CB offers a lot more than many would guess in FIFA 21. With 85 defending and 78 physical stats, he can be a great presence at the back as he proved for Liverpool last season.

He would be a starter for the Merseyside club if he wasn’t so injury prone This shouldn’t matter to potential FUT managers as he is a beast in the game with his 6ft 4in frame. He is an immediate threat from corners and set pieces which makes him an attractive option in the heart of defense.

He will cost between 4000-5000 coins right now in the game and is not going to be a popular choice as he will be overlooked for flashier options. But the CB position is one area on the field where you do not need to overspend to get quality players and Matip is a great example.

This Leicester City defender has been a solid presence for Brendan Rodgers’ team for a few seasons now. Quick into the tackle and aggressive, he wins the ball aplenty in the game and plays like an 85-rated player rather than an 80-rated card that he is.

With 89 aggression, 72 Sprint Speed and 84 Standing tackle stats – he will be very hard to get past in the game. His decent speed makes it easy to chase down forwards at the end of a through ball too, which is a pain in FIFA 21.

He will not be an absolute dominant presence. But for 1600-2500 coins, he is an absolute bargain. He is a great option for a starting premier league build and is great to play with in the game. Try him out and you will not be disappointed.

This Arsenal speedster had an underwhelming season that demoted him to a 80-rated card this year. but his stats look absolutely crazy. Since our LB is not the fastest in the world, we have provided pace to our back line with Bellerin, who with an 87 Pace rating is rapid.

He also has 77 Dribbling and 76 defense. This makes him a great option to bomb forward and also track back and provide defensive stability when needed. He can easily outstrip many wingers and fills in the offensive full back role seamlessly.

Costing 6500 – 8000 coins, his card is a monster for attack minded builds that require overlapping runs.

This Manchester City midfielder is not the quickest player but has some great passing and dribbling stats that allow him to sit in front of the back four and dictate the play. He has an absolute OP 83-rated card and is a dream to play with in the game.

With 80 Penalties and 74 Freekicks, he can be set piece specialist for the team and combined with a whopping 85 curve, you have a great direct free kick taker in your team now.

At only 3400-4400 coins in the game, he is a very inexpensive player who can be the creative playmaker you need at the center of the park.

Don’t let his 79 overall fool you, this Liverpool midfielder has one of the most offensively stacked CM cards in the game. His 80 Pace, 74 Shooting, 83 Dribbling and 78 Passing make him a midfield dynamo who can perform various roles in the game.

He is perfect for making late runs into the box and shooting or can also double up on the overlap and provide crosses. He has a solid shot and great dribbling which allow him to wiggle out of tight spaces and unlock defenses.

He will cost 3900 – 4200 coins in the game, which in our opinion is an absolute steal. He is a pleasure to play with and can wreak havoc on unsuspecting opponents who will overlook his offensive prowess.

Don’t let this Newcastle United midfielders overall deter you from making your first choice CAM. He is an absolute beast in FIFA 21. We would even go as far as saying his card is the most underrated and overlooked card in the game.

His stats on the card look underwhelming but when you delve a little deeper, the stats that make a good CAM player is extremely high in Almiron. With 89 Pace, 82 Dribbling, 78 Shot Power, 82 Stamina and 78 Vision he is a spectacularly easy player to play with.

We are sure his pace and agility through the middle of the midfield will serve you well with plenty of goals and assists in FIFA 21. He will cost you a measly 1300 – 2000 coins in the game.

This former Wolves player secured the move to Liverpool this transfer window for a hopping 45 million pounds. His card looks extremely well rounded and versatile in FIFA 21. He has 83 pace, 84 Dribbling and 77 Shooting with a 5 star weak foot.

This makes him one of the deadliest wingers in the game. he is fast and agile and can glide past defenders. His shooting stats are amazing and can score from a variety of ranges by cutting inside. He also has a mean cross on him and works well with a tall, fast striker.

He will cost you 6700 – 9300 coins currently on FUT in FIFA 21. This is an absolute bargain and can save you on an expensive winger who will have a similar output. Grab him up and you will not be disappointed.

This veteran of the premier league is a proven player who recently made the move to Arsenal. Quick off the mark, he can provide crosses, pop off shots and torment defenders with his ability to swing in an amazing set piece from any angle.

He has an 86 Acceleration, 88 Dribbling, 84 FK Accuracy, 84 Shot Power, 83 Curve and 83 Curve. He also has 4-star weak foot and 4-star skills that make him an absolute nightmare to face. He might not be the strongest but he makes up for his speed off the mark and ability to swing in crosses which is a deadly asset in FIFA 21.

He will cost you 3000-4000 coins and this an absolute steal for a quality player who can help you team in a variety of areas include set pieces, penalties and assisting. He can also bang in shots from rage making him a great buy.

This highly underrated Wolves striker is one of the most popular strikers at the moment in FIFA 21 FUT. With an impressive 84-rated card, he has been priced at 7000 – 14,000 coins which is an absolute steal for his stats.

You get a proven goal scorer who has some of the most well-rounded striker stats. With 78 Pace, 84 Finishing, 92 Penalties, 83 Shot Power, 84 Dribbling, 86 Stamina and 85 Heading – he is the perfect striker for FIFA 21’s OP header game. Tall and powerful with 84 strength, he has one of the best goals to game ratio in FUT this year compared to other premier league strikers.

Pick him up quickly as his price is bound to shoot up. He is one of the OP meta cards this season and having him on your team guarantees you at least a goal a game in FIFA 21.

This team gives you a chemistry of 99 and a rating of 81 with a group of players who outperform their overall rating. Their stats will help you in game and surprise and dominate opponents with a highly economical build.