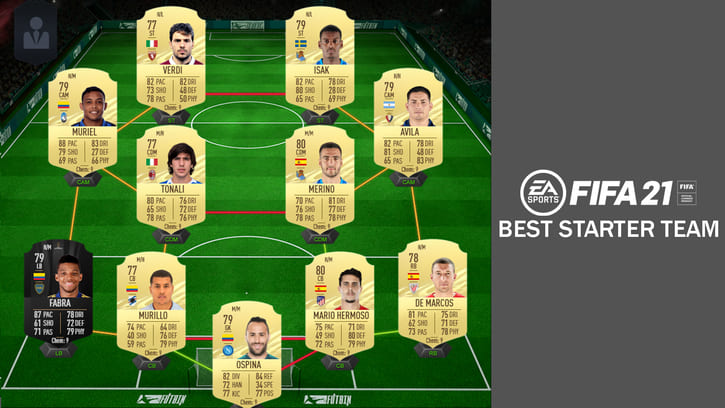 Therefore, if you have had a look around but aren’t sure as to where to best allocate your coins, in today’s article, I will show you the best ultimate team starter squad that will bring you in results regardless of who you play against.

This starter squad will contain players ranging from some of the strongest defenders in FIFA 21, to the cheapest 5-star skillers, and best young players and wonderkids. It truly is budget ultimate team squad that can easily dominate the field, even against the best of opponents.

Today’s build will cost you between 20,000 – 25,000 coins at the writing of this article. Keep in mind that as the transfer marker progresses, some of the player prices have probably changed slightly, however, regardless of that, this still remains the best cheap ultimate team starter squad in FIFA 21.

Essentially, I have made a hybrid between Seria A and La Liga, which works really well in my opinion. The front four players are pretty quick with great dribbling abilities, which is the meta in FIFA 21. In midfield, we have some of the best cheap midfielders that work very well with our team when it comes to chemistry. Defensively, we have some really quick, and strong defenders in all four positions, and the goalkeeper, well, he is a god in net regardless of what his overall score has to say.

In terms of formation, I have gone for 4-2-2-2. The reason for that is because we not only have four defenders to help our goalkeeper Ospina, but also have a pretty solid attacking reinforcement of four players, which the midfielders can easily distribute the ball to at any given moment to set you up for an easy goal, provided you know the best ways to score in FIFA 21.

When it comes to making improvements on your squad, I’d recommend that you save your money as much as possible as this team can carry you to success for quite some time.

However, it is understandable that after some time, once you learn how to trade players for profit, you would be looking for potential changes in the squad, upgrades, and even purchasing some extra substitute players for your bench.

Provided you want to keep the mix of Seria A and La Liga players, in defense, I would upgrade De Marcos to Jesus Navas (84), or even Real Madrid’s Carvajal (86).

In terms of CB, Barcelona’s Samuel Umtiti (83) or even Real Madrid’s Raphael Varane (86) would be great upgrades. When it comes to Seria A, Inter’s Diego Godin (85) or Leonardo Bonucci (85) are some of the players that you should try and obtain.

For the left-back position, I’d probably go for Alex Sandro (85) or Aleksandar Kolarov (82).

And for goalkeepers, you can go for Barcelona’s Neto as an initial upgrade and eventually aim for goalkeepers in the likes of Ter Stegen (90), Courtois (89), and Oblak (91).

When it comes to midfield, on the Seria A side, you could go for either a lower-end player such as Aaron Ramsey (82) or if you have some more coins, Arthur (84) or even Lazio’s Sergei Milinkovic-Slavic (85).

For a right mid-fielder, I’d recommend Saul Rodriguez (84), or even players in the likes of Frenkie de Jong (85), and Miralem Pjanic (85).

For Seria A, Luis Alberto (85), or even Atalanta’s Alejandro Gomez (86) would be great upgrades if you are looking for a bit more pace on the wing.

For Seria A, the best you can get is Ronaldo (92), however, since 99% of us probably won’t have the coins for him, players such as Ciro Immobile (87), and Romelu Lukaku (85) are great upgrades to the current team as well.

For La Liga’s striker position, Iago Aspas (84), and Antoine Griezmann (87) are the players that you should be looking to buy. If you have a bit more coins, you could even try and get your hands on Luis Suarez (87).