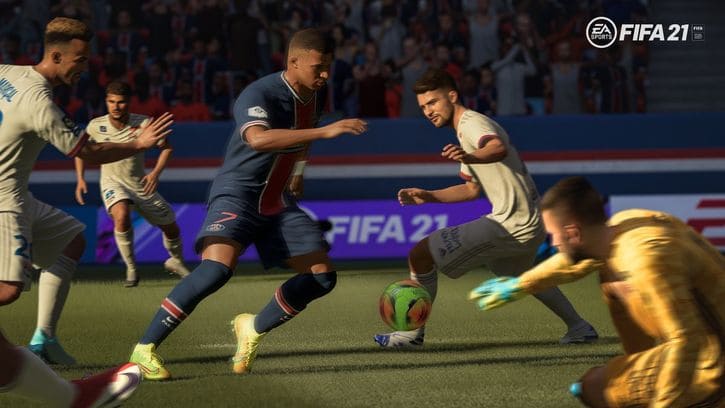 In FIFA 21, formations affect the game immensely. Defensively, it it imperative as defenders do not cover half the pitch with unrealistic positional play. FIFA 21’s defensive play is set up in a way where the player has to do more work than the AI. From dictating positions and tracking runs, players have to be aware of a lot of factors when the opponent attacks.

Below is the list of best formations we tested in FIFA 21. They each compliment a certain style of play. Depending on the players you have in your squad and the style of play you prefer, you can choose one and dominate opponents in both career mode and FUT gameplay in FIFA 21.

One of the more preferred formations of last season by Europe’s elite, the 4-3-3 Attack formation has taken the footballing world by storm. Ajax, Liverpool, FC Porto, Arsenal and Chelsea all use this (or small variations) formation effectively and are often praised for their attractive and attack-oriented brand of football.

The 4-3-3 formation is built on high pressure. The whole team is geared towards restricting opponent space and dynamic players who constantly swap positions to try and win the ball and release the attackers towards goal. ball hungry philosophy with plenty of things going for it.

The most effective versions of this formation employ incredibly adventurous wing-backs who bomb forward at every opportunity. Most common plays involve one of the three midfielders dropping into the defensive line while the other two support the attack. The wing backs provide width while the three forwards use clever interplay and pace to break through the lines.

In FIFA 21, this formation can be used if you have reliable full backs and a good striker. But the most important factor to consider is if your team is able to capitalize on quick counter attacks. The front line needs to be quick and two of the front three should have a ‘get in behind, instruction to be effective.

This narrow 4-1-2-1-2 build offers more width than any formation we tested. The 1-2-1 in the midfield flatten out forming a solid 4 in the middle with the full backs bombing down the flanks. The two at the top too, swap with the midfielders to constantly play ‘total football,’ wreaking havoc on the opposition. This formation does not rely solely on flank play as you can choose to attack through the middle, making it extremely versatile.

In a team with a solid mix of midfielders with a variety of attributes, this formation is a must try. If you have an assortment of specialist CDM’s, CM’s, CAM’s, LM an RM’s – you can almost be assured of dominating with this formation. Playing the CM in the hole in front of defense, you can give free reign to your quicker, more attack oriented LM and RM’s to support the full backs and provide runs on the inside.

But this formation provides great moments through it’s ability to place almost 3 players on each flank on most attacks. If you attacks through the left flank, you have a LB, LM and the LS who all fall on one side. This gives you opportunity for incredible interplay. It is now a 3 vs 2 on the left side allowing you to find the overlapping man and swing a cross into the free RS who is in the box. Or you could choose to cut back into the marauding RM or switch play to the right back.

This formation allows for some incredible attacking okay but make sure you don’t have a very high line as it can be susceptible to counter attacks. Also, one tall and one quick striker combo might be the best way to capitalize here.

This classic FIFA formation has been the reigning FUT formation for a few years now. balanced, precise and easy to understand – this formation has something to offer for almost every kind of FIFA player.

Skillsters, winger – dominant players or players who like to counter quickly through the middle all love to use this formation because of it’s versatility and adaptability. This formation allows you to mix up a variety of styles of play and surprise opponents with different strategies that are are equally effective. You could press high for the first twenty minutes and sit back for the rest of the game of just swing long balls into the the front line throughout and bypass the midfield, all with this one setup.

The Striker is the most important player by far in this setup. He needs to be able to adapt and contribute to a multitude of attacking scenarios as most times, players don’t know where the opposition is weak. FUT opponents might have slow center backs who can be countered with a pacey striker or high pressure strategy that can be unlocked with long balls into a tall and strong striker. Players like Lukaku, Suarez, Harry Kane or Ronaldo are perfect for this role.

Play with a high line to make use of the offside trap and a couple of pacey wingers in the squad are great additions to this formation too.

This is the traditional football way of setting teams up. This throwback formation lost it’s popularity in the 2000’s but has made a steady resurgence into modern football with managers using it’s stability to counter the more fast-paced sides with holes at the back.

The traditional winger – striker dynamic can be exploited here with a target man and a more agile forward teaming up to capitalize on deliveries from the flank. This formation also gives the wingers freedom to cut inside as the midfielders can cover for their defensive roles on the flank. This makes this formation an all-around beast in FIFA 21. Opponents will find it hard to score against you while you can dormmate them with possession-based or steady build-up football to score from header, through balls, or pass and go’s using two strikers.

Teams like Simeone’s Athletico Madrid or Lampard’s Chelsea are modern-day European giants who use this formations stability at the back to build their attacks on and are roving to be very successful.

And now, for the ones that want to truly dominate their opponent in the midfield to attacking position, let us present you with the 3-1-4-2. Some of you may be thinking, is it reasonable to take 1 defender from the defensive line and push them that far up? To be honest, I don’t know.

It works really well for me because I am somewhat good at defending and I don’t really find it a challenge to defend against 3 or more attackers because I have three of the fastest and strongest defenders in FIFA 21. Basically, it’s pretty hard to get past them, unless your opponent has some of the fastest strikers in FIFA 21, which makes it quite the challenge but it’s worth it.

On the positive side of things, you will have 3 defenders, 1 CDM, and 5 players saturating every attacking position on the field. The only thing that can stop this type of formation from being dominating is if your opponent plays super defensive on 5-3-2, which is quite rare and boring.

Try it out, give it some time to get used to it, particularly if you are used to playing with 4 defenders at the back, and watch the number of goals you score and percentage of possession go up.

Similar to the 4-2-3-1, the 4-3-2-1 is a little bit more defensive in terms of player positioning. Rather than having 2 players in midfield, you will have three players that are much closer to each other with 2 attackers (which pretty much act as wingers) and 1 striker, which is slightly up the field. Essentially, it has a widespread of defenders and narrow midfield & attack.

Why this formation is great? Because you not only have 4 defenders (great if you mess up in attack as they can protect you from counter-attacks), but you will have three midfielders that will be working closely together in breaking up the opposition and pass the ball to either winger or directly to your striker who you can then use to score a goal, provided you know the best ways to score goals in FIFA 21.

Whatever formation you select, the most important thing to remember is that in order to dominate an opponent, you need to keep possession of the ball. This means that you should almost never pass the ball where your opponent has the chance to get hold of it (such as risky crosses or long balls) rather than ending up in the back of your opponent’s net.

The best way to achieve that is by playing calmly and taking every attack slowly and building up your attack pass by pass as you close down the distance of the ball to your opponent’s goal.