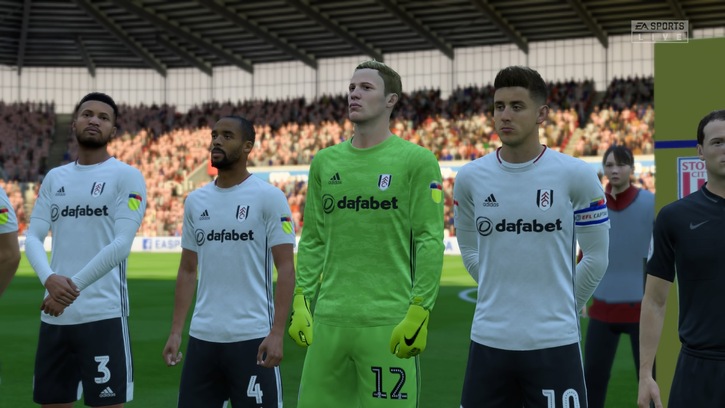 After a fairly successful season in the Championship, Fulham has been promoted to at least a season of Premier League football where they finished fourth with 81 points; 12 points behind the Championship winners Leeds United.

First and foremost, we will take a closer look at the starting 11 followed by a summary table of all substitute players for Fulham for the 2020/21 Premier League season.

The 25-year-old Frenchman Aboubakar Kamara is one of Fulham’s most valuable players who has returned to help the team from London strive for Premier League glory after being on loan to the Turkish Yeni Malatyaspor. Despite a fairly decent season, his overall has actually dropped by 1 point to 70.

Having played for Fulham for three seasons, Neeskens Kebano has become an integral part of Scott Parker’s starting 11. As last season he didn’t show anything out of the ordinary that deserves recognition, I anticipate that his card will remain with an overall score of 70.

The 27-year-old Englishman from Bristol, Bobby Reid, managed to net 4 goals in 24 appearances after being on loan to Fulham from Cardiff City. After a pretty amazing performance in the 2019/20 season, Scott Parker has decided to get hold of the player’s rights. His FIFA 21 rating has been, however, dropped by 1 to 72. He is also one of the teams’ best free-kick takers.

After a year on loan to Fulham, Scott Parker has decided to purchase the now ex-Brighton player after a great season at Fulham. Despite playing 38 games, and scoring three goals, his overall score of 76 in FIFA 20 has been dropped to 74 for FIFA 21.

Having played for West Brom in the 2019/20 campaign wherein 14 appearances he managed to score just 2 goals, the Norwegian Stefan Johansen is making a return to Fulham’s starting 11. From his 73 overall last season, EA have decided to deduct 1 point of his overall down to 72 for FIFA 21.

Josh Onomah has had a really good season for Fulham. In 31 appearances, he had 3 goals and managed to bag a bunch more assists, making him a pretty valuable player in Scott Parker’s midfield. My prediction is that we will see his overall rating go up by at least three points from 69 to 72.

Antonee Robinson is a youngster as compared to the rest of the defensive players for Fulham in the starting eleven. Despite playing alongside veterans in defense, he has shown Scott Parker why he deserves a spot in the starting 11 for Fulham. I actually think that it would be unfair if his rating remained at 69, and believe that it would in fact go up to 70 for FIFA 21.

Tim is another veteran in defense. The 32-year-old American has played for Fulham at a pretty high level over the last 5 campaigns. You could argue that he too had a pretty good contribution to the promotion Fulham managed to secure last season, and because of this, despite his age, I think his rating deserves to go up by at least 1.

I guess you could argue that Michael Hector had a pretty solid contribution to the success Fulham managed to obtain last season. Not so much because of his 0 goals, but more because of his defensive efforts in the 23 appearances he recorded in 2019/20. Because of this, his overall score has remained the same as FIFA 20 at 72.

The 32-year-old Belgium defender is playing his fourth season for The Cottagers. He is undoubtedly Fulham’s veteran in defense and despite his age, due to a pretty great performance last season, his overall score has gone up by 2 points from FIFA 20’s 69 to 71 in FIFA 21.

After an amazing campaign for Fulham, the 23-year-old Serbian goalkeeper has managed to keep 15 clean sheets in 36 appearances. Because of his age an amazing performance, his overall card score has gone up by 4 points to 74 in FIFA 21. I also believe that he has the potential of being one of the best young players in goal in Europe.

And now that we have gone over Fulham’s starting 11, let’s take a quick look at Scott Parker’s players on the bench.

And those are all of the Fulham FIFA 21 player ratings for the first team. What are your thoughts? Do you think that the EA player ratings are fair, and if not, which player deserves more or less points on their overall score?