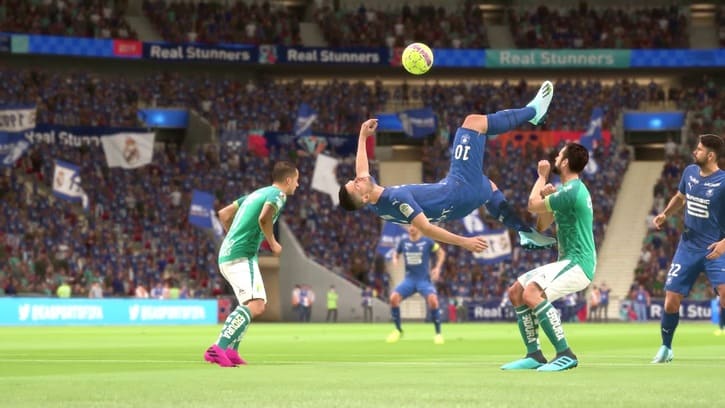 Bicycle kicks are probably the most satisfying way to score a goal in not only football but also FIFA 21. While scoring this particular goal is a challenge within itself, once you manage to pull it off against an opponent, the feeling of dominance is truly indescribable.

So, if you want to learn how to do a bicycle kick in FIFA 21, stick around as in this article, I will guide you through each step of the way so that you can not only set up your players for a Bicycle Kick but also know exactly how to convert every such opportunity that you create.

Setting up for a Bicycle Kick

This aspect of the bicycle kick is probably more difficult to achieve than scoring the goal itself. Essentially, if you set up your players badly, the won’t even have the chance to get their foot on the ball as in most cases, an opposing defender will clear the ball away.

So, what do you need to do? First and foremost, you need to be running alongside one of the wings or in close proximity to the penalty box on either side of the pitch. This will give you the opportunity to see where your players are going to run and provide you with enough time to cross in the ball accurately.

If you attempt to do the cross for a bicycle kick from a close distance, usually, a defender will interfere right away or you will simply kick the ball too far out.

Moreover, you will always want to cross the ball just behind the player so that they can turn around and execute the bicycle kick. Otherwise, in 90% of cases, the player will attempt some sort of a volley.

Another way is to just set up the same player that you are using for a bicycle kick by simply having your back against the opposing goal (just outside or inside the box), doing a few kick-ups, and then doing the bicycle kick yourself.

It is much more difficult to achieve as in the large majority of cases, a defender will quickly run towards you and either tackle you or put you off balance so that you can’t execute the bicycle kick.

Now that you know how to set up your players for a bicycle kick, you need to know how to execute the shot.

Once you cross in the ball to a particular player, simply hold L2 or LT (depending on the platform that you are playing on), and hold the shoot button which is either B for Xbox One and O for Playstation while aiming towards the net with your left analog stick.

Then, if you have done everything correctly, your player should be able to have a clear chance for a shot and potentially score a goal.

Keep in mind that the bicycle kick is a very difficult shot and even the best players on FIFA 21 can’t successfully execute it every single time they try. So, in order to get better, you will just need to keep on trying, and eventually, it will happen more often than not.

Note: You also won’t need to spend coins on any cheap 5-star skillers as the bicycle kick can be done by pretty much every attacking player that has at least 2 or 3-star skill moves. So, even the fastest cheap strikers on your cheap starter team should do the job just fine.