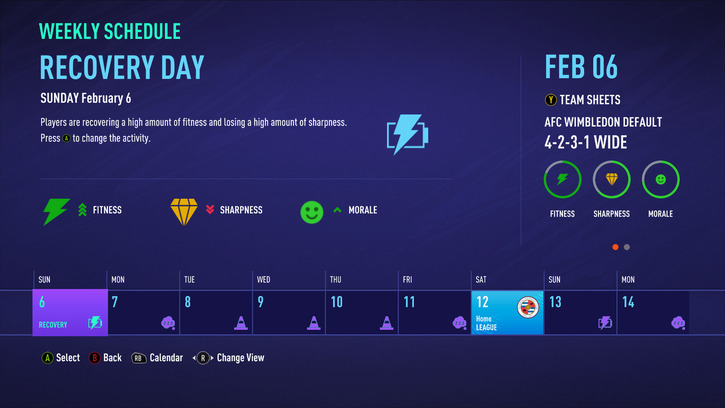 Career Mode’s training and player development has undergone a serious revamp in FIFA 21 and the entire weekly training system has been overhauled into a more complex and involved system of training which affects player morale and sharpness.

It is also imperative to maintain high match sharpness to win games either while simming them or playing them. When you play with a team that is not at its peak match sharpness levels (80-100 percent), the AI tends to make more errors in positioning and the players also feel sluggish on the ball. This leaves a lot of open gaps in defense which leads to more goals conceded.

To avoid losing in career mode, it is crucial that you know how to gain match sharpness before the start of the season and maintain it throughout. This guide will give you tips to achieve this and get the best out of your team.

Under the training menu, click on a currently selected drill and navigate to change players. Here, go to your reserves or bench and choose appropriate players from here instead of your usual starting 11. This will make it easier to improve your overall squad match sharpness for the arduous season ahead.

FIFA 21 career mode has not fixed the scheduling issues from last season. This means that your team will be playing 3 fixtures in 6 days in certain congested times of the season. To counter this, having a full squad of players with high levels of match sharpness is highly beneficial. This will allow for squad rotation without much of an effect on the outcome of the games.

Career Mode gives you a default training regimen for your squad. A rest day before a game and a recovery day after the game is essential. But between fixtures, the default is training every other day. This is not the optimal strategy, especially early in the season, to get high match sharpness levels.

In the Weekly Schedule menu, you can click on individual days on the calendar and switch between rest or training for the day. This allows you to cram in a few days of continuous training which allows you to focus on the entire squad instead of just the starting eleven.

But remember, after a few days of consecutive training, your squad deserves a one day break. This allows their fitness and morale to reset and it is also very important to avoid injuries while simming or playing in FIFA 21.

Substitute in the players with low match sharpness during games that you are already winning by a large margin. This is the best way to increase a player’s match sharpness because it increases rapidly (up to 10 points) with just 15 minutes of play time in a league or cup game.

When you bring on players, remember that the rest of the squad has high match sharpness which will allow them to cover for some of the shortcomings. Also, this is the best time to test your squad and see who can still perform with a low match sharpness (players with high composure and aggression stats often perform well even with low match sharpness)

Do Not Retrain Too Many Players

Retraining a player generally reduces their match sharpness drastically until the new training regimen is completed. This is mostly because the training is focused towards a new area on the pitch which might affect their sharpness in the original position.

Having 2-3 players retraining their position to cover holes in the squad or maximize growth potential is optional. Any more than this, and you risk low match sharpness which leads to poor performance and lower overall morale.

These drills are available in passing, shooting, dribbling and defending drills and can be used to drastically modify the squad fitness within a couple of weeks. Also, watch out for drills that decrease player fitness a lot (three red arrows). They could injure players on the long run.

Also, perform all the drills and achieve the highest rating you can. This sticks with your career mode and when you sim training sessions, you get the highest grade every time without having to play the same drills over and over again which can be time consuming and tedious.

Use these tips to achieve the highest sharpness rating for your squad. You cannot have 100 percent match fitness for your entire squad but you can aim for a 75 percent overall which will ensure most players will perform well in games.