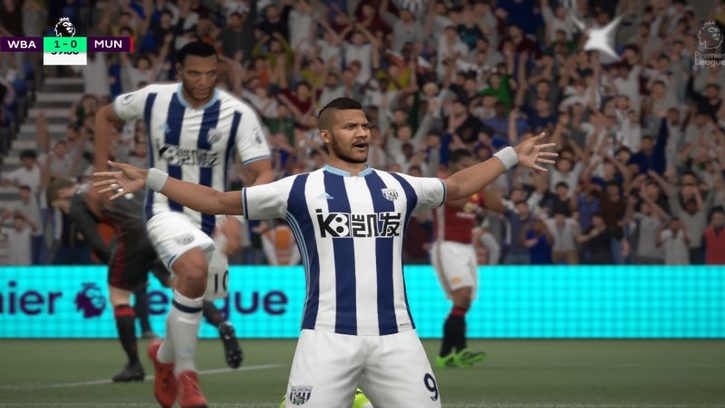 The West Brom FIFA 21 player ratings are out, and to be honest, there are a couple of surprises that I personally was not expecting, which I am going to cover in today’s article.

This comes at no surprise since Slaven Bilić’s side got promoted to the Premier League for the first time in 2 years after having an incredible campaign in the Championship where they finished 2nd, 10 points behind the champions Leeds United.

Below, I will cover each of the starting 11 in a little bit more detail. If you are looking for the players on the bench, you can find out their stats summarised in a table right after.

In the new season, the 25-year-old Callum Robinson appears to be the only striker in Slaven Bilić’s starting 11 in his 5-4-1 formation despite scoring just 3 goals in over 18 appearances. Due to his minimal contribution to the team, despite being one of the best free kick takers in the West Brom squad, EA has downgraded his FIFA 21 card down to 72.

The 21-year-old Englishman Grady Diangana is one of the youngest players in the entire West Brom squad. He is not only quick, but is also good with the ball, and because of that, he is in the starting 11 this season. After an amazing performance last year, EA has granted his overall score an additional 5 points to 73.

Romaine Sawyers was one of the key players for West Brom during the 2019-20 campaign appearing 43 times, and scoring a single goal. Due to his strong nature, you can see why the 28-year-old has made a place for himself in Slaven Bilić’s starting eleven.

Jake Livermore is also one of Slaven Bilić’s starting eleven. After a pretty solid campaign for West Bromich last season, he has easily solidified a place in the squad despite his age of 30. In FIFA 21, his overall score will be 74.

Matheus Pereira has undoubtedly become one of the West Brom’s stars after scoring 8 goals in 42 appearances in his first year after being on loan from Portugal’s Sporting CP. EA, however, has decided to to leave his overall score at 76.

Kieran is one of West Brom’s star defenders. Due to his consistent, yet average performance in the 2019-20 campaign, he is set to keep his 75 overall score on FIFA 21. There is little room to complain as he isn’t exactly young for the sport anymore at 30 years of age. Despite this, he is the fan’s favorite and a solid player for the starting 11 for the Croatian manager.

After a pretty successful campaign in Exeter City on loan from West Brom, the Irishman returns to ‘The Baggies’ with the hope to solidity himself a position in the starting 11 for the duration of the season. For FIFA 21, his overall score will see an increase of 1, up to 68.

After another successful season at West Brom, the 29-year-old Englishman is set to become one of the leaders in defense for the ‘The Baggies’. As he is one of the strongest players in the team, I personally believe that his rating deserves to be higher despite EA sticking with his FIFA 20 overall of 72.

After a wonderful season, West Brom’s Semi Ajayi is expected to receive quite a significant boost to his overall score in FIFA 21. His overall for FIFA 21 will be 73, up 2 from FIFA 20’s 71.

Darnell Furlong is arguably the best right-back defender West Brom has had for a while. With his above-average performance last season, I believe we are going to see an increase in his overall ratings on FIFA from 68 to around the 71 mark.

Sam Johnstone is the first team goalkeeper for the 2020/2021 season and it is easy to see why. After a wonderful season for West Brom, he will maintain his overall player card score of 75 in FIFA 21.

Now that you can see the FIFA 21 player ratings of the starting 11 for West Brom, let’s take a look at the remaining 7 first team players on the bench.

And that is it. Here you have it; the complete West Brom first team player ratings on FIFA 21.