Home
Display
Gaming Monitors vs Gaming TVs – Which is Best? 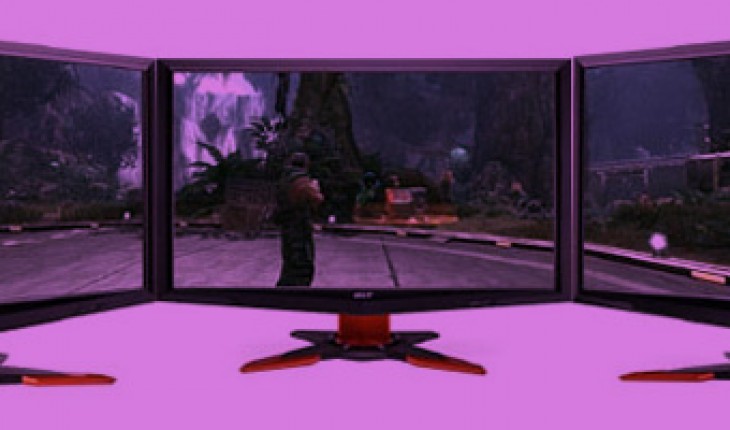 You’re a gamer. You’ve invested a few hundred (or thousand) into your graphics card, you’ve got so much RAM that your motherboard looks like a cyborg’s brain, and you scoff at a lowly 720p resolution. But now you’re faced with a dilemma. Do you hook up a high-end computer monitor to your rig or go with a gaming television? Which one is going to give you the better experience? Luckily, you’ve come to the right place for an answer.

There are several factors that you’ll want to weigh when it comes to choosing the right screen for your gaming experience. Everyone has different needs, preferences and financial situations, and will value certain factors more than others. Whether you choose to go with a television or monitor will depend entirely upon these preferences. But let’s look at each one of them in detail and determine exactly what the differences are on each aspect.

Let’s start with the price. You are probably already aware that the gaming TV makes much more sense from a financial perspective. After all, you probably already have a few HD televisions throughout the house, and all you would have to do is move it over from the spot in the corner to your gaming desk. In addition, comparable TVs and computer monitors can have a pretty huge price difference – with the gaming monitor sometimes costing about twice what the TV does. For example, you can get an HD TV that is just about the right size for gaming for about $500, while the monitor counterparts like the ASUS ROG Swift and the Acer Predator Series gaming monitors are about $1000; with a smaller screen size!

Generally speaking, the same size monitor is always going to cost more than the comparable television. But there are features that monitors have that make up for this difference. In some cases, the price will be comparable, but the size will differ. That’s exactly the case with the LG 27UD68-P 27-Inch 4K UHD IPS Monitor with FreeSync and the Samsung UN50KU630050-Inch 4K Ultra HD Smart LED TV. Both are priced about the same (between $450 and $500 currently) but as you can see, the Samsung TV is a 50″ while the monitor is much smaller.

Unless you’re on a budget, you are always going to want to choose the 4K resolution, whether you are talking about a monitor or 4K gaming television. However, if you are on a budget, then resolution might play a factor in your decision. You might not have hundreds to drop on a 4K monitor and will have to settle for the lower – but still stunning – resolution of 2K.

If you want to really reach for the stars, there will soon be televisions that offer 8K resolution; that might be enough to convince you to hook up your rig to a TV no matter what all of the other factors are. But 8K is still a few years off, and computer monitors are going to lag behind televisions in offering this resolution.

Something else that you want to consider is the aspect ratio. You’ll want to find out which aspect ratio works best with a particular television or computer monitor and compare that with the resolution to see which one gives you the best result.

Tablets and phones use a different technology like IPS or VA, but the problem is, these cannot be used for gaming monitors because the response time is much slower – anywhere between 4 and 8 milliseconds minimum. New OLED monitors are definitely the preferred option, with a response time of 0.01ms, but the tech is so prohibitively expensive that monitors just aren’t being made with OLED technology yet.

What you need to know about the response time difference between TV’s and monitors is that this is an area where monitors perform better. While you can get televisions that have refresh rates of 120 or 240 Hz, they are really expensive, because you just don’t need them when using the TV as a TV. A monitor is a much better choice if you are concerned about this area.

The next area that we will discuss is the versatility of the TV or monitor that you choose. One of the first things to consider in this area is the type of connections that your device comes with. Generally, when it comes to high-resolution televisions and monitors, you will have three options. The first is the HDMI connection, which can support up to 8K with the latest cable technology. Many video cards have HDMI outputs that will work fine with your gaming TV.

You might have instead (or in addition) a DisplayPort connection on your video card. Again, this can support up to 8K with the latest technology included. Finally, some computers – especially laptops – will use USB type-C connections. All three of these technologies run both audio and video. The versatility factor comes into play when you consider whether you will want to use your monitor as a TV at some point down the road. If that is the case, then you might want to make sure that you get connections that will allow you to hook up your Blu-Ray or other TV equipment.

Finally, the last area that we’ll cover is features. If you are stuck between two comparable devices, then the additional features might take one of them over the line. For example, there is a different viewing experience between matte and gloss screens. You should try both and see which one you prefer. They are both great – but some people definitely prefer one viewing experience over the other.

Your monitor might also be easier to move around than a television would be. For example, many gaming monitors come with a swivel base that allows you to easily turn it to one side or the other to share your screen with someone or see the monitor from another place in the room. Some monitors also have height adjustments that make your viewing experience better.

On the other hand, your monitor may not play high-quality audio. It might not even play audio at all. This is an area where televisions can often outperform monitors. Many televisions have high-quality speaker setups already included and that might make a difference unless you are planning to get your own sound system anyway.

Let’s take a look at the pros and cons when it comes to choosing a TV over a monitor for gaming.

Now, let’s check out some of the advantages that a computer monitor might have over a television when it comes to gaming.

More versatile than many televisions; incorporating many different connections
Smaller and often with features that allow easy movement such as swiveling and height adjustment
Faster response times, refresh rates and will be available with technology like OLED first

The bottom line is that there are advantage and disadvantages on both sides.

The type of device that you choose should be based upon both what your current needs are and what your needs might be in the near future. For example, if you don’t play a lot of FPS games with massive requirements, you’ll probably be just as happy with a larger TV that has a longer response time and higher refresh.

You’ll also want to take your own budget into consideration. For serious gamers, the monitor is probably a better choice. For casual gamers who want as large of a monitor as possible, and the ability to play Blu-Rays down the road, the TV is a good option.