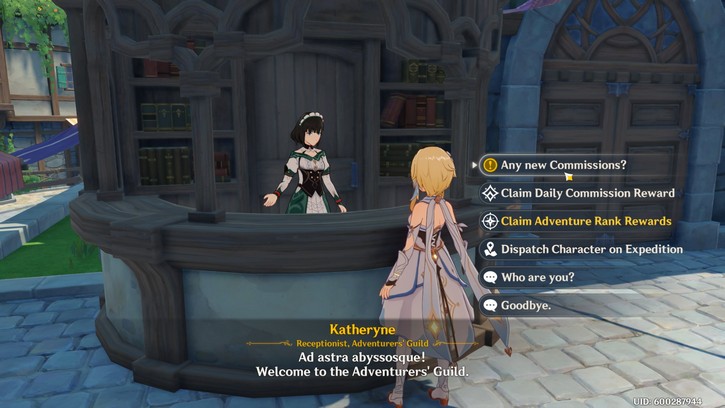 These are the things you must absolutely do every day to be ahead of the curve in Genshin Impact. This Genshin Impact beginner guide will show you the step-by-step progression and how to be efficient as much as possible.

Archon quests are the main storyline you follow in the game. It also gives the most adventure rank experience points in the game but it is also level-gated when you finish it early. So every time you finish the archon questline and finish and act, you will need to reach another specific adventure rank to start every other act. It is a great idea to dash of exploration while doing the main archon quest.

The story quests are another quest chain you can do with a particular story of other supporting characters included in the game. They also give a good amount of adventure rank experience points, character exp materials and weapon enhancement materials. There are more features involving the story quests when you reach adventure rank 26 where you will need to do daily commissions to farm story keys.

The world quests are a bit different and are denoted on the map by a blue exclamation point. You have to interact with these NPCs around in the overworld to accept these quests and they usually involve hard puzzles and strong monsters to fight. Some quests give a good chunk of Primogems which makes it one of the most important questlines to do.

Some of them are quite short and some of them do not give Primogems as a reward as well. I still recommended finishing every world quest you find as you will always be looking for ways to increase your adventure rank to get back to the archon quest or unlock a new feature like co-op mode, temples or the Spiral Abyss.

You need to finish the archon quest until you get level-gated. Keep rushing the story and once you need to reach a certain adventurer rank to continue, that is when you will consider exploring or doing other quests. Use this method if you want to reroll as well and is discussed more in this separate article.

Ultimately, you will be doing this until you finish the archon questline because there are just too many world quests and story quests that it will be hard to get level-gated without any content left to do to increase your adventurer rank.

Rate up banners always has better rates because of the pity system. In a standard banner, items and characters have a shared pity system and it will be a shame if you get a 5-star weapon and have the character pity reset because of it. The rate up banner separates them both so you can have a 5-star weapon and a 5-star character in a total of 90 pulls. You can see some more details in the rerolling guide here.

For weapons, you should always max the weapons you get to level 20 or your main party members. You will have a surplus of this before any weapon ascension and if you keep farming all the minerals and ores you see, you will have an even bigger surplus and will be used mainly for ascended weapons.

Weapons are also harder to get because you will not be able to get them through normal play. They are only acquired from wishes and special events. Weapons will not be that important in the early stages but it will help with getting past quests with ease. When you reach the world level increase stage, that is when you will need to start paying attention to your gear.

I recommend upgrading only 3-star and above weapons at the start and try to refrain from maxing them out first. If you have a 4-star or 5-star weapon, you can max them out. Wait until you progress and get more Primogems or Fates so you can pull more weapons.

If you have no other choice and the wishes are really unlucky for you, you can start upgrading 3-star weapons if you want but it will not be efficient. You can check out this shop guide here if ever you want to spend it efficiently.

For artifacts, there are numerous rolls you can get and there are different sets as well. There are too many random elements involving artifacts so my general rule will be just to focus on the main attributes each artifact has. Always treat percentages (%) higher than raw numbers when equipping artifacts.

After that, consider which sets are the best to equip for that specific character. Great percentages rolls are greater than some 4-set pieces with low base attributes. Once you reach a higher adventurer rank, you will see a lot of artifacts in your inventory. Sometimes it is also best to focus on getting two 2-set artifacts than just one 4-set artifact.

Get into co-op mode and defeat world bosses or good artifacts. Use all the 2-star and below materials to enhance artifacts and focus on the best-rolled ones as you might be using them permanently in the future.

Things to Do Daily

Daily commissions will be the main way of acquiring Primogems in the long run. It is a renewable resource and it only takes around 5-10 minutes to complete. Try to keep track of how many wishes you are using and always be conservative when using them. Characters in gacha games are always hard to collect and their rates are quite low especially on the standard banner not having a split pity system on weapons and characters.

Original Resin depends on how frequently you play the game. You would want to increase your world level as fast as possible to make your Original Resin usage as efficient as possible. The items that drop from completing world bosses scales to your current world level. It increases when you reach adventure rank 20 and 25.

My recommendation is to defeat the world boss you need to ascend your characters once. If you aren’t able to grind adventure rank because of your limited playtime, you can spend them on ley line outcrops and domains until you can reach adventure rank 25.

Once you reach adventure rank 25, finish the wolf trial once a week and farm the world bosses for artifacts and character ascension materials. Only switch to farming ley line outcrops and domains when the specific materials you need are up.

So far, you can only progress to adventure rank 30 and it might take a long time before new content comes out. To be as efficient as possible, you will need to rush to adventure rank 25 or 26 to get the highest tier of materials every time you spend Original Resin. After reaching that rank, you can slow down your pace and just keep grinding daily until you eventually reach the max level. You can definitely reach rank 25 in a day if you play efficiently for the entire day playing.