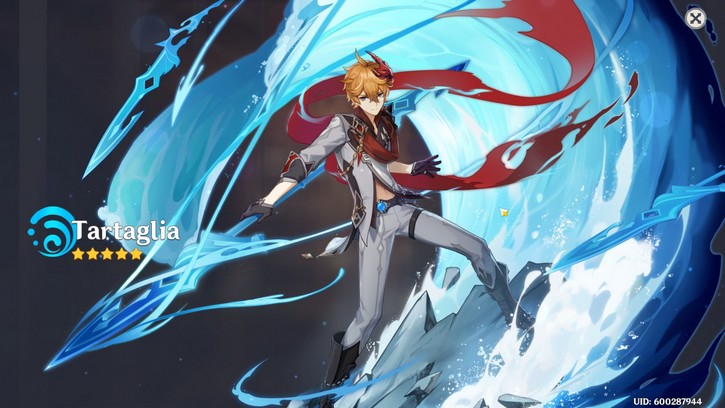 Tartaglia or Childe is one of the Eleven Harbringers of the Fatui. He is a Hydro element bow user and his main role in a party is to be the primary damage dealer.

This means that he will be used as your main character most of the time in your party setup. While there are multiple ways to build Childe, this guide will show you how to build Tartaglia in Genshin Impact.

Stats You Should Focus

While I still have a long way to go to get his gear up and ascend him, reading his talents and skill set will make the stats you should focus on more obvious. Most of my good gear has elemental mastery so I just slapped on what artifacts I had free but it is still lackluster.

The stats you should prioritize the most by far is the critical rate. Tartaglia’s talents revolve around his debuff called Riptide. It shows a mark on enemies when you have inflicted the debuff and there are only two ways to do it.

His skills are absolutely broken when you have him on at least 80% and above critical rate. This is hard to achieve but there are a few items that will help with achieving that even up to 100%. The biggest contributor will be an artifact with the main stat critical rate and your weapon with a critical rate stat bonus. These will be discussed more below.

Another good artifact set will be the Noblesse Oblige set. If you can get your critical rate up and consistently land Childe’s elemental burst while he is on melee form, this will absolutely drown the enemies with high damage all around.

The 4-piece set bonus is also a nice touch for your party setup and since Tartaglia is your main damage dealer, the ATK% bonus will be up most of the time for your whole team.

Just remember the stat priorities mentioned above when building and choosing an artifact set. Stats are more important to Childe than 4-piece set bonuses. The only exception is probably like Venti’s Viridescent Venerer set where the 4-piece bonus outweighs the stat requirements. Check out our guide on 5-star artifacts here.

The Skyward Harp is Tartaglia’s best in slot weapon. It gives you a lot more critical rate from the stat bonus and it gives you more freedom in choosing artifact sets by not going for a Berserker set.

Skyward Harp increases critical damage by 20% and hits have a 60% chance to inflict a small AoE attack that deals 100% of your physical attack damage. It is a nice touch and even when you switch to your melee form, it will still activate.

Rust does not give you a critical rate bonus from the weapon but the normal attack damage increase from it is a nice boost for Childe’s overall damage output.

This item is easier to get than the Skyward Harp since it is a 4-star weapon but there are more alternatives if you do not have this weapon.

Slingshot is one of the best 3-star weapons for bow users. Most of you will probably have one in your inventory so make sure to not accidentally feed this one while upgrading weapons.

The Slingshot gives a critical rate bonus from the weapon with every upgrade. Your normal attack or aimed shot hits a target within 0.3 seconds, your damage increases by 36%. This is easier to refine as well and that percentage can go all the way up to 60%.

It decreases your damage by 10% if you do not land it so avoid using an aimed shot. The damage effect bonus is a little bit broken for Childe because you can activate it in your melee form.

This bow is acquired through the first season battle pass and if you have purchased and complete it, this is a great substitute. It increases your critical rate and adds an overall area of effect damage by generating cyclones every 14 seconds.

It will also help you clump up the enemies inside the cyclone and with a higher attack stat, it can also help shred these enemies with the cyclone damage.

If you are lucky enough to get multiple copies of Tartaglia, you are either a whale or just one of the luckiest gacha players to play the game. His first constellation is already extremely useful for him.

It allows you to freely swap between ranged or melee more frequently because of the 20% cooldown reduction. This also allows you to permanently use melee form as it will reset the cooldown after its full duration.

His 4th constellation helps your overall Hydro damage by inflicting more Riptide Slashes that are not subject to his innate time intervals from the skill.

His first three talents are all important to upgrade even his normal attack. Once you get your normal attack talent high enough, it increases your overall damage on each of your party member. It is a great boost to have when you really want to have Childe maxed out.

Focus more on his Havoc: Obliteration or elemental burst when upgrading as this one will be majority of your overall damage output.

How to Get Childe

Childe will be available on his very own exclusive banner with a rate up chance of 50% of getting him from the banner. You can learn more about wishes here and Primogem farming here. With the rates explained in the other article, you will be able to get him 100% of the time after making a total of 180 wishes. It is best to do single wishes if you want to be thrifty with what you have.

Tartaglia brings a breath of fresh air for players looking for a good Hydro character. There are so many fire enemies in the game including those pesky Abyss Mage shields and Tartaglia just melts it instantly.

While I do believe that main damage dealers are not a good priority to have if you already have a good one, Tartaglia is definitely one of the best just because of his insane flexibility on dealing single target or area of effect damage while switching between melee and ranged.

You can check out our other guides here such as Diluc’s build and shop guide.