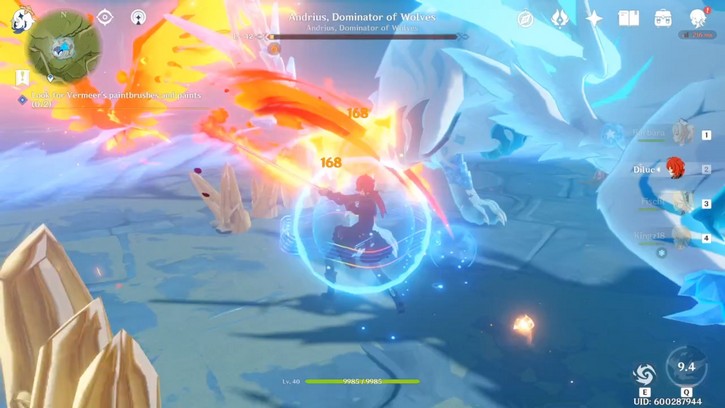 How to Unlock the Wolf Trial

To unlock the wolf trial near Wolvendom, you will need to complete “The Meaning of Lupical” questline. It is the story based on the in-game character Razor. The questline starts when you reach adventure rank 21 and have completed a certain portion of the archon questline.

Razor’s questline will also involve fighting the wolf in the end as a trial but you will not need to defeat it at first. After finishing the questline, the challenge will open up in the arena near Wolvendom which will be a weekly boss you can finish.

Tips and Tricks for the Wolf Trial

The boss should have the same fight mechanics for each of the world levels. The video showcased above was completed in world level 2 and the boss, Andruis, Dominator of Wolves, was at level 42. It gives better drops so it is best to complete this weekly boss when you reach the highest world level you can attain for the week. You can check out this beginner guide to figure out how to rush your adventure rank efficiently.

The party setup you need will be any character that is not Ameno or Cryo because they will not be able to deal with any elemental damage to Andruis. You can choose whichever character you want that are available as long as you follow the elements. I recommend having heavy melee compositions for your party.

You should try to use Barbara as a healer in this fight since she is a free character at adventure rank 20 but if you have a better healer, you use that character instead.

The problem with Barbara is that she is hydro and turns everything wet including your characters. Getting hit by the wolf will freeze you immediately so you would have to dodge everything if you will be using Barbara to heal your team. It is also perfectly possible to do this boss without a healer but it is safer if you bring one.

This is when Andruis is still on his first form with the darker shade of blue. Keep attacking the boss normally as you would do with a normal mob. He does several area of effect attacks that you can see clearly on the ground. You will be given enough time to react and you can double-tap sprint to dodge the area faster.

Another trick you can do is to dodge it by using the sprint button when it is about to land the attack on you. Even if you are within the area of attack, you will not receive damage if you time it perfectly with the sprint which is also used as a dodge. He attacks more aggressively during this phase and it is actually more difficult than phase 2.

It would be a great idea to increase your stamina first before fighting this boss because it involves a lot of sprinting and dodging. You can increase your max stamina by offering blessings to the statues. Be aggressive with your attacks when fighting and just time your dodges perfectly.

You will burn through the first phase quickly if you have Xiangling and Diluc. You can also use Razor which can be bought from the Starglitter Exchange in the shop. There are more details about the shop and you can read more about it here.

Phase 2 is much easier. Andruis’ first attack will always be the Cryo shower where there will be small icicles exploding randomly in the arena. You can easily avoid this since the explosion radius will be visible before it explodes. Just keep dodging while sticking to the boss during this phase. You will need to stick to the boss to kill it quicker because range attacks are more difficult to pull off especially during this phase.

The other attacks include frontal swipes, sideswipes, and a linear vertical blast where the boss is facing. When it reaches a certain point, the boss will enter some sort of frenzy where it would run around the arena and make a fast dashing attack towards your direction.

At this point, just focus on dodging because you will not be able to damage the boss. After the frenzy, keep doing your strategy and kite around the boss in melee range until you defeat it. The video above will clearly showcase how it was finished.

This is the most important boss to complete right now because of how valuable its drops are. The only problem is that it is time-gated and you can only loot it once a week. Make sure to never forget to do this trial and if you are near on increasing your world level, do that first before finishing any world bosses or the wolf trial.