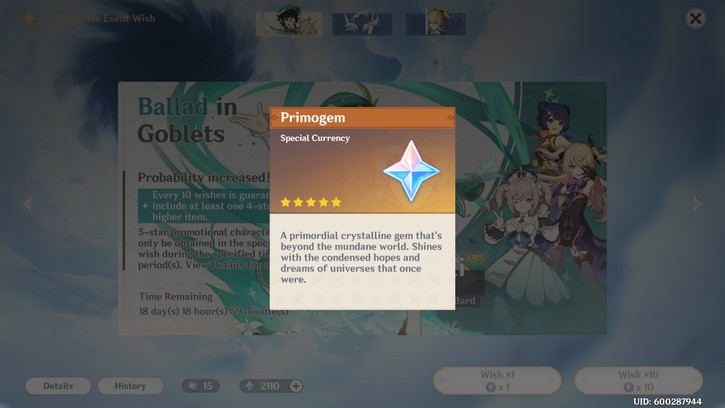 Primogems are the lifeblood of Genshin Impact. They are farmed by progressing through all forms of quests, temples, achievements, daily commissions and overworld chests. These are only some ways on how to get Primogems in Genshin Impact.

Primogems are the main premium currency in Genshin Impact. This is one of the hardest currencies to farm in the game and should be used carefully. There are a lot of uses for Primogems and this article will guide you where to spend these and why.

What are Primogems Used For?

They are used to purchase Acquaint Fates and Intertwined Fates to be used for wishes that get you characters and weapons in the game. Wishes are the only way to get new characters except for the ones given to you at the start through the main story and adventure rank like Barbara, Lisa and Kaeya.

The difference between Acquaint Fates and Intertwined Fates are discussed more in our rerolling article guide for Genshin Impact here.

You can also use Primogems to refresh your Original Resin which is the stamina system in the game. You can refresh up to 6 times and it will cost exactly 50 Primogems to get 50 Original Resin for a refresh. This is absolutely not worth it and is basically just a huge money dump for “whales” in the game. There is no reason to purchase this refresh with Primogems even if you have some money to spend on this game because there are more valuable things to buy.

How to Farm Primogems

The fastest way to get Primogems are through finishing temple runs found in the map but this is only a first-time reward that is non-repeatable. You will open new temples as you increase your adventure rank so keep an eye on those you are eligible for.

The next way to get Primogems is by finishing quests. World quests, in particular, offer more Primogems as a reward for completion depending on the difficulty and length of the world quest. Some of these are relatively simple and even give up 50 Primogems for finishing the quest chain.

You can also get a fair share of Primogems from completing achievements in the game. You can access this tab by opening the menu tab and pressing the trophy icon to see the achievements you can finish. Each of these achievements gives for at least 5 to 20 Primogems each and at the end of the day, it all adds up when you just keep playing the game.

Daily commissions also give a chunk of Primogems that should be done daily. You can finish this under 10 minutes and does not cost Original Resin. These can be done in co-op mode if you prefer.

Treasure chests are the most grindable method to squeeze out as much Primogems you can in a day. You can find these chests around the overworld and keep an eye out for luxurious chests and precious chests that give more Primogems. Overall, the normal ones, like the exquisite chests, already give you around 5 Primogems each. As of now, they do not respawn and it is interesting to see how the developers will address this issue as the stamina system in the game, in my opinion, is heavily flawed.

Keep an eye out for shrines like these you can find in the overworld. They contain luxurious chests or precious chests which give you a ton of materials and a decent amount of Primogems. The keys are found in temple completions and world quests.

The most overlooked way of getting Primogems is through the Adventurer’s Handbook. Completing each chapter gives a hefty amount of Primogems that can help you purchase more fates for wishes if you have not gotten your most desirable character yet.

The last method of getting Primogems is through buying it with real money through the in-game shop. They have bonuses for particular items that are quite valuable compared to their other listings. Their shop is explained more in detail as well as the things you should remember in this article.

At the end of the day, the Primogems are limited and it should not be a surprise considering it is a premium currency in the game. The only repeatable way of farming Primogems is by finishing your daily commissions. If you progress fast and play countless hours a day, you will eventually plateau and find it hard to grind out more Primogems as your focus will be more on gearing instead of getting new characters. It all depends on when miHoYo chooses to address this in their future updates.