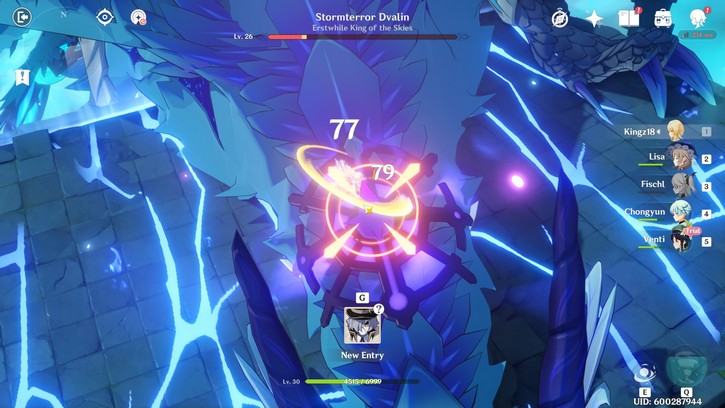 Stormterror Dvalin is the hardest boss in the game and you cannot kill it in co-op mode. It can only be done weekly and drops the best items in the game. The article will guide you in finishing this boss consistently at all world levels.

The best party composition for this fight is to have 1 healer, 1 main DPS and 2 other characters. You can choose to remove the healer and just eat up when you get damaged. This is assuming that you have a ton of food stored in your inventory for healing.

It is hard to get a healer like Barbara to get his elemental burst up because of how the boss is always flying. Every second that you have the option to hit Stormterror Dvalin should be spent damaging it so you will start with Barbara having one elemental burst and that would be it.

Stormterror Dvalin will launch two sets of two elemental bombs that will be aimed towards you at a slow speed. Simply go to the updraft at one of the corners to dodge it or if you are already floating, just remove your glider to dodge it.

The boss will charge the middle for a flying sweep. This attack will not make Stormterror Dvalin vulnerable and it is easily dodged as long as you stay in one of the corners or sides.

This is its most dangerous attack but it is also the one you need to look out for to deal damage to the boss. Watch for Stormterror Dvalin’s head to see which side his dragon breath will start. This attack is signaled by the dragon’s claws. If they are both on the ground on both the opposite sides of the platform, it will perform the dragon breath.

After learning which side the attack will start, float or run towards the opposite side and throw everything on the dragon’s claw. Once the dragon’s breath is near you already, move back quickly to the nearest updraft and float again.

When you are at one of the sides of the platform, Stormterror Dvalin will swipe at you for a good chunk of damage. After this, it will be vulnerable to attacks and will stay on the ground for a few seconds where you can freely hit it. Getting hit by this will lessen the amount of seconds you have to hit it so just avoid it by going up the updraft at one of the corners.

After downing Stormterror Dvalin, it will make the platform desecrated which will cause your characters to take damage upon stepping on the platform. By this time, you should already be used to using the updraft to avoid taking damage and only go down when you can hit it.

Stormterror Dvalin has many devastating attacks that can be lethal if you do not understand how they work. You will need to go through the dragon’s shield which can be seen below its HP bar. After destroying the shield, the boss’s head will fall on the platform and you will need to climb up the dragon and hit the crystal in the middle.

You can spawn an updraft at both corners and float during the fight. This should be done as often as possible until you know what kind of attack Stormterror Dvalin will go for. Only go down the updraft if the boss is vulnerable. Watch for its sideswipe and dragon breath so you can prepare your drop to do deal more damage to the shield.

When you are floating, you can easily heal up by opening up your inventory and make your characters eat food to recover HP. To be efficient, when you bring down the boss and you are starting to hit the crystal, cycle through all your elemental skills and elemental bursts in your party setup.

Make your main DPS the last and start hitting it with normal attacks after going through all your skills. With good enough gear and upgraded talent points, you can try to kill the boss in two cycles.

Avoid staying in the middle if you are about to bring down its shields. There is a bug where your character can get stuck and you will not be able to deal any damage to it because of this.

The drops from the Stormterror Dvalin boss are the following and they vary greatly on the world level difficulty you are in and what the current level of the boss is.

Remember to do this every week because this drops the best items in the game. This probably has the highest chance of dropping a 5-star artifact especially when you reach world level 5. If you are near on increasing your world level, wait for it until you finish this boss for the week.