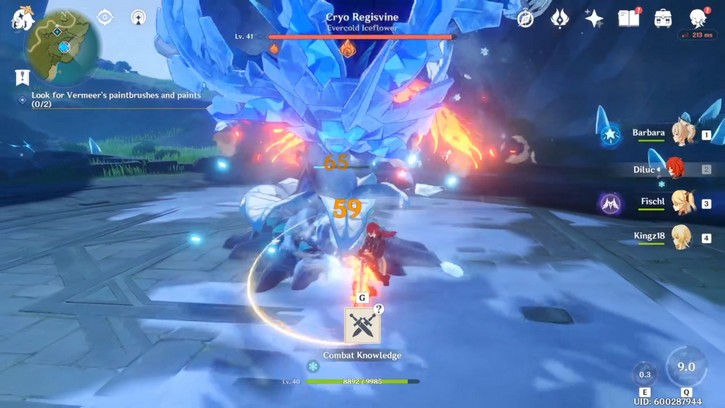 The Cryo Regisvine elite boss is a dangerous boss in Genshin Impact. It is needed for farming Cryo character ascension materials. This guide will show you what to look out for and what strategies you can use to make the fight easier so you can farm them as much as possible. It also drops good artifact sets for the early game such as the Exile and the Berserker.

The best composition is to bring one healer and any Pyro characters you have to be mixed with another non-Cryo element with it. Some prefer to have ranged units so they can dodge more easily and you can also opt to bring characters like Fischl and Amber. Do not bring any Cryo characters for the boss because the boss is immune to it. For a faster boss kill, I recommend going for strong melee characters and treat the boss like a normal mob you throw everything you have on constantly.

Personally, I brought all my strongest characters including Barbara and a single ranged unit. Barbara is my only healer unit and is actually the worst healer to bring but it is fine as long as she can heal on cooldown. The problem with Barbara is that using heals or even just using her attacks can instantly freeze you if the Cryo Regisvine manages to attack you.

It is manageable if you can heal quickly and dodge while recovering. Immediately switch to your Pyro character to remove the “wet” debuff or mechanic so you will not get frozen after getting attacked. A ranged character is useful for times where the boss freezes the area surrounding him causing players to take severe damage when stepping on it.

The Cryo Regisvine has a ton of high damaging attacks which can make it hard to recover from when you get it. The best way to take it down is to hit its “eye” which has a separate HP bar. When you destroy the eye, the boss will fall down causing it to be immobilized and you can freely hit it for at least 10 seconds. The position of the eye will alternate from the stem and the head. To make this guide more simple, it will be divided into two phases.

For this phase, the eye will be at the stem of the boss. You can easily burst it down at the start but beware of its attacks. You can easily dodge its flail attacks if you time it correctly. If you get hit, continue to keep killing the eye and just recover when you immobilize the boss.

The most dangerous attack from the boss is the ice beam. The boss aims the ice beam exactly where you are and will follow you while it charges the attack. The trick here is to just keep moving counter-clockwise or clockwise. After the boss shoots the ice beam, gauge where it will spin and dodge in the opposite direction. You can see this attack at around the 0:43m minute mark of the video above.

After successfully dodging it, immediately return to hitting the boss and you will have a small window to deal with a good chunk of damage. It is best to try and kill the boss as fast as possible so that it could not rotate through its attacks. Remember to hit the head after killing the eye when the boss falls. Cycle through all your characters and throw all your elemental skills at it.

The next phase is just when the eye switches to the head instead of the stem when the Cryo Regisvine boss recovers from immobilization. It will immediately flail around after recovering but that can be easily dodged and you can land a few hits before and after the attack.

The boss has an attack that calls down frost icicles to explode on the floor. This gives you time to again unload a ton of attacks on the boss and these are also easy to dodge. If you have been landing several hits in between the boss’s attacks, you will be able to kill it in a single phase 1 and phase 2 cycle. On world level 3 or higher, it will take multiple cycles between the two phases.

The drops from the Cryo Regisvine boss are the following and they vary greatly on the world level difficulty you are in and what the current level of the boss is.

The Cryo Regisvine is one of the hardest elite bosses in Teyvat. It is because of its high damage output attacks. The ice beam can even one-shot a character of yours if you decide to follow the beam’s rotation in the arena. If you are used to the boss’s attacks and mechanics of the fight, this boss fight can be extremely quick. Co-op mode can make this fight easier because everyone can attack the boss at the same time when it gets immobilized.