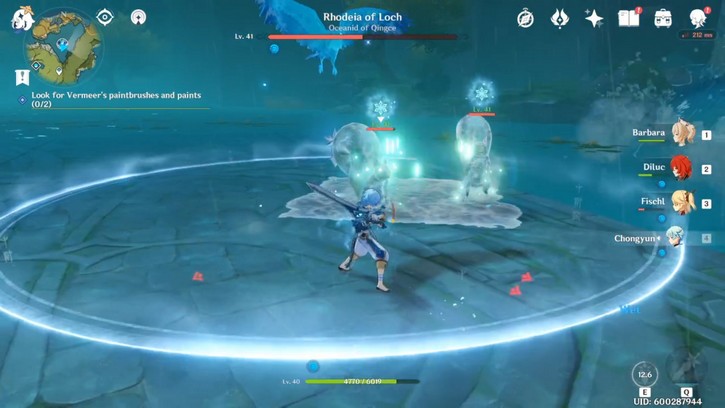 The Oceanid fight is more of completing multiple trials than an actual boss. Rhodeia of Loch is the name of the boss and she summons Hydro monsters to fight for her instead. This is a unique elite boss in Genshin Impact and this guide will lay down the strategies you need to know to defeat it alone.

The best party composition is getting one healer and at least one ranged character. Both are heavily required. If you do not have any strong ranged character from wishes, you can use Lisa over Amber for this fight.

Getting a Cryo and an Electro character is another great strategy for the fight. Lisa can be great especially on co-op mode for her area of effect elemental skills. Combining both elements can apply Superconduct on the enemies and lower their defenses. Not only that but, Cryo characters like Chongyun can permanently disable multiple enemies while attacking for the whole duration of his elemental skill.

The summoned hawks will be the hardest problem because it will require ranged attacks. Fischl is the most efficient character to deal with them while Lisa can use her normal attack on them which is good enough for a free character.

The Oceanid, Rhodeia of Loch, summons monsters for you to fight instead of the boss itself. You will only damage the Oceanid when you beat the Hydro summons.

The water boar summons are simple and they just have one simple attack where they charge at you.

The water squirrel summons are your normal melee faster but slightly faster than the water frogs. They can be dangerous if there are water hawks accompanying them because they are extremely fast.

In my opinion, the strongest among the summons. They are hard to keep track of because they are flying and you will not be able to hit them with your melee characters. They hover at a constant level above the platform so you can easily hit them with ranged units.

They attack extremely fast when they chase you and it can knock you back. These water hawks also hit hard it can force you to sprint and drain your stamina. Falling into the water without stamina will instantly drown you which will automatically result in a fail so you have to be careful.

The water crab summons are one of the most annoying summons in this fight. They move sideways while sliding and spray unlimited water in your direction. Their movement also makes the floor wet and can cause frozen when you use Cryo characters on the ground and walk on it.

The water frog summons are your normal melee monsters. They attack you from melee range and they explode on death.

The water crane summons does not move as much and they do a ranged attack where they throw a wave of water at you at a distance.

Tips and Tricks For Oceanid Fight

The Oceanid fight is simple. You can think of the fight as doing multiple monster challenges around Teyvat. After knowing what Rhodeia of Loch summons, you can adjust accordingly to them. You will have plenty of room to kite these monsters if you get surrounded at the start of the fight.

After two rounds of fighting these monsters, the Oceanid will start removing platforms by 2 and try to limit your movement around the arena. This is fine as long as you know how to cycle through your party’s elemental skills. Getting thrown off the arena and into the water will not cause a reset on the fight but you will need to get back as quickly as possible.

If you are using a Cryo character, always lead with his elemental skill so you can freeze annoying monsters like the Hydro crab. This sets them up for a big combination depending on which element or character you bring out next. Repeat this strategy throughout the fight and avoid as much damage as possible. The free healer can be quite useless here in terms of damage but her heal is still great.

Noelle is a great substitute but she is not a healer. She should be available in your roster as it is in the beginner banner. It is explained more here on how to get her.

The drops from the Oceanid boss fight are the following and they vary greatly on the world level difficulty you are in and what the current level of the boss is.

The Oceanid is a unique elite boss that lets you fight a group of monsters rather than a hard boss. This is what makes it easier to do on co-op but can be quite frustrating for solo players who can get surrounded by the summons. It should be farmed quite early in the game because of Barbara. Hopefully, they could introduce more Hydro characters in the game especially a 5-star one.