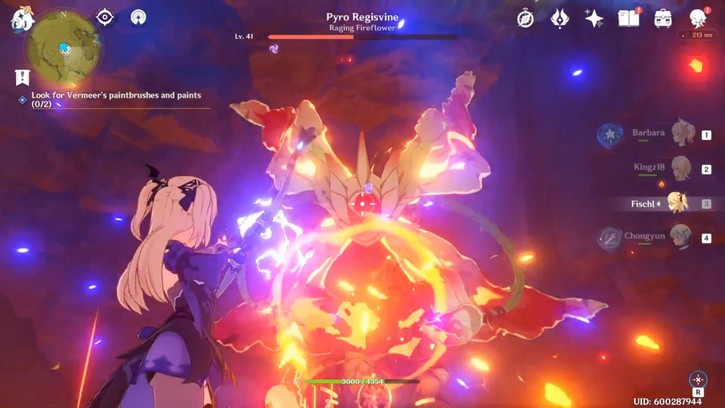 The Pyro Regisvine elite boss is one of the most popular farmed bosses because of the number of strong Pyro characters in Genshin Impact. It drops character ascension materials and great artifact sets which are required to progress for world level 3 and above. This guide will show you how to beat the Pyro Regisvine and which characters to use.

The best party composition for this is to bring one healer and any non-Pyro characters. The free unit, Barbara, is really strong in this fight and already fills the role of the healer in your party setup. You can add another Hydro character you want and mix elemental reactions with your combos. If you do, you will also get the elemental resonance called “Soothing Waters” that lessens the Pyro debuff by 40% while increasing your overall healing by 30%.

Bringing a ranged character, specifically, a bow-user can help you destroy the eye faster. It is not required and it will just adjust your strategy a little bit. If you bring an all melee party setup, it is still possible and can even be faster kill depending on how the Pyro Regisvine attacks.

My personal team for it was just the main party setup I use for questing and exploring. Diluc was my strongest character but I had to change it to my next strongest character and my team had 4 different elements. They are Barbara, the main character, Fischl and Chongyun. Superconduct is a great elemental reaction to apply because it lowers the defense of the target. Chongyun and Fischl apply this elemental reaction through Cryo and Electro elements.

The Pyro Regisvine is another dangerous elite boss compared to the others but is much easier than the Cryo Regisvine. The Pyro Regisvine has an “eye” which you need to destroy to make the boss fall down so you can freely do damage. The eye switches from the stem to the head of the boss every time you destroy it. Hydro characters can melt the eye of the Pyro Regisvine quickly and immobilize the boss. To make this guide simple, it will be divided into two phases depending on the eye’s position.

For the first phase, the boss’s eye is always located near the stem. Immediately after jumping down the arena, you can throw all your elemental skills at it and you can easily burst down the eye at the start. The boss will flail around causing melee characters who cannot dodge in time take a big chunk of damage.

The boss can do attacks that spawn tiny fireballs that follows its target and hits for a small amount of damage. The flail attacks of this boss are similar to the Cryo Regisvine but without the ice beam attack that makes the Cryo Regisvine more dangerous. It is also easier because you can land strong Cryo elemental reactions like Superconduct on this boss and have Barbara, if built with some damage, shred the boss.

During this phase, the boss’s eye is located on its head. Do not worry about bringing a ranged character to hit it because the boss will do a certain attack where it uses its head to smash melee characters. Dodging takes a lot of timing but when you successfully dodge it, the head remains on the ground for a short amount of time where you can hit the eye with melee characters.

To immobilize the Pyro Regisvine in this phase, just wait for the boss to do this attack and hit it. From the video above, you can see that shooting it with an arrow is quite weak, and using a charged bow attack can be dangerous. Other than its flail attacks, most of its attacks are easily dodged.

If the fight lasts long, you might encounter attacks where the Pyro Regisvine burns the ground around melee range where you will need to wait for it to dissipate before going again. For world level 3 and above, it will definitely take multiple cycles to kill the boss and you should be used to its attacks when you reach that point.

The drops from the Pyro Regisvine boss are the following and they vary greatly on the world level difficulty you are in and what the current level of the boss is.

The Pyro Regisvine is simple and once you get used to it, you can also do the Cryo Regisvine with ease as long as you follow a good party setup. Pyro characters are extremely strong in this game and this is one of the most popular elite bosses to farm for character ascension materials.