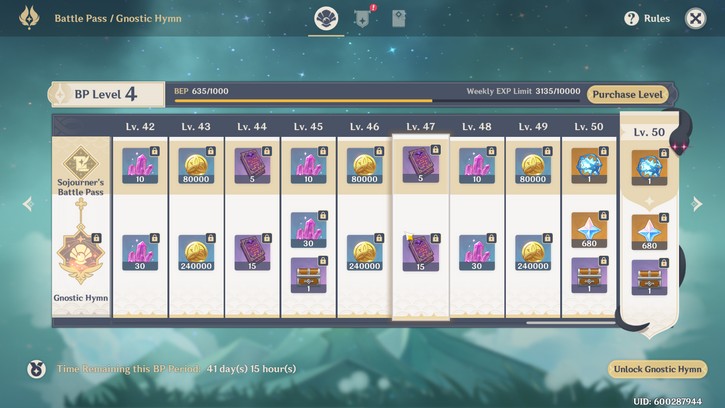 This article will focus more on the currencies in the game and what are the items you should buy from the shop in Genshin Impact. There are multiple currencies, a battle pass and bundles to calculate. This guide can be handy to those who want to spend some spare cash or those who want to be thrifty with what they have.

The monthly pack is the holy grail of all gacha games. It always gives out the most value in terms of real money currency to in-game currency ratio. In Genshin Impact, they are more generous with their monthly pack considering how hard it is to get Primogems after you exhaust all options. As you can see from our previous Primogems guide, they are extremely limited and the farmable method is only through completing daily commissions.

The Blessing of the Welkin Moon monthly pack can get you at least 20 wishes. The only caveat being, you will need to wait 30 days before getting it. It is a great investment for future banners as long as you know how to save your Primogems and when to use them. Always maximize the use of the pity system from the rate up banners.

Overall, this is the best bang for your buck option if you ever choose to spend money on this game.

Stardust exchange is acquired through making wishes. Everything you pull out of the wishes used will give you Stardust. This is the more common currency and is treated more like another pity system where you can cycle through more wishes by doing more wishes. You can only buy 5 Intertwined Fates and 5 Acquainted Fates every month and it is at a discounted price.

You should always buy this and try to wait until you get 10 of the same kind of fates so you can easily count how many you need for the pity summon. You can choose to buy any of the materials available as long as you have enough Stardust to purchase the fates every month. Most likely, you will receive more Stardust than the total cost of all the fates for the month as long as you are active in the game.

The Starglitter currency is more scarce than the Stardust equivalent. It is only acquired from getting 4-star and above weapons and 4-star and above characters. You only get a few from every 4-star item but the items are also cheap.

The characters, Razor and Amber, did not rotate even after a month but there is no reason to believe that they would not add any other character to the Starglitter Exchange in the near future when they release more characters to collect. The weapons and materials are farmable so it is not worth it. Assuming that you are a hero collector, you should spend everything on fates because this currency will be harder to get and you will not have any leftovers to buy materials.

Razor is a great electro character that uses a greatsword. He is actually worth it if you were not able to get any good electro character because the free unit, Lisa, is underwhelming especially on solo activities.

Genesis Crystals are exclusively for players who have made purchases with real money because they cannot be acquired through playing the game. Currently, it is only used as an exchange to get Primogems. The conversion rate is 1 Genesis Crystal to 1 Primogem.

There is no reason they would do this unless they have something planned in the future to use this exclusive currency. Genshin Impact is still a new game and there are so many things they can still add to the game like character skins, exclusive equipment and possibly pets and mounts.

The bonuses from purchasing Genesis Crystals are quite fair compared to most gacha games. For the reason being that you can buy each of these once and still receive the double Genesis Crystals bonus. I tested it as shown in the image above. I have made a purchase of the $29.99 and the $49.99 Genesis Crystal bundles and still have bonuses available for the other denominations.

While this option is generous to those who are willing to spend, it might turn off a few other players who are playing for free. None of the content so far shows hints of having PvP so there is no reason to think that it can be “pay to win”. Gauging whether it is worth it or not depends on the user.

For example, you can be a few fates short of doing wishes before the banner expires and you would need some extra Primogems to make use of the pity system. The number of denominations available and allowing everything to have a bonus will help you save as much as possible if you decide to spend money.

The Gnostic Hymn is Genshin Impact’s own version of a battle pass. There is a free battle pass with decent rewards and a premium version that adds more to it. This only becomes available for players who have reached adventure rank 20.

The Gnostic Hymn costs $9.99 and there is another option that gives you an extra 10 level bonus and 6 Fragile Resins for $19.99. The premium version’s rewards or the Gnostic Hymn’s rewards are all calculated below.

Note that these are all separate from the free battle pass and you can still receive both rewards. The premium rewards are not at all enticing for new players because of how most of these are given to you in great amounts at the start of the game. It does not help your progression at all at the start.

In the long run, chests will be hard to come by because they do not respawn. You will find yourself starving for character EXP materials and weapon enhancing materials. This is where the premium battle pass can be useful and worth it. If your aim is to just get more wishes, you are better off buying the one-time purchase bonus from Genesis Crystals.

At the end of the day, spending money on a game like this really depends on how you like the game and how the game will progress through good updates. Right now, the game is absolutely breathtaking and the combat system is enjoyable. There are a few things they can improve on like co-op mode and endgame content. The game is relatively new and you know it will only continue to get better from here.