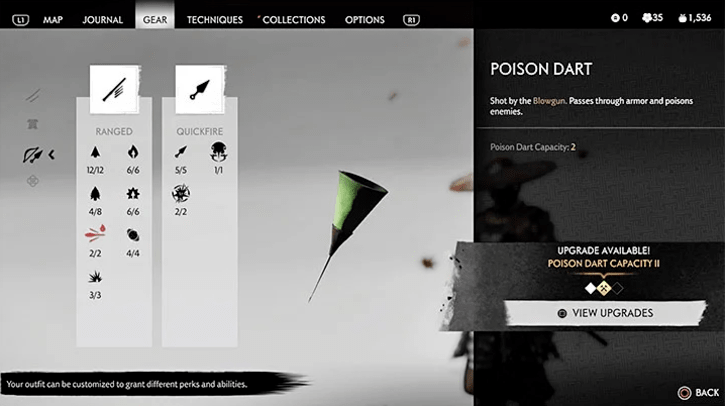 In this blog post, you will find everything you need to know about darts in Ghost of Tsushima, including what they are used for, the different types of darts, and where you can find them.

Quick Navigation show
What Are Darts Used For?
Types of Darts
Replenishing Your Darts

What Are Darts Used For?

The darts are a kind of ammunition used by the Blowgun. Each dart has its own unique features that have a dramatically different effect on the enemies that it is used against. Each of the darts is advantageous over the other in particular situations, making them an essential part of your gameplay.

For example, the poisonous dart that comes from the purple flowers is great when fighting opponents that have armor as it can easily penetrate through it and poison the enemy, leading to their eventual death.

There are two types of darts in the game. The first one of the two is the poison dart. It is available after you get your hands on the blowgun. After that, you will be able to test them during the “Ghost From The Past” side quest.

If you manage to hit your opponent with your poison dart ammo, the victim will begin to spit blood and shortly die. The effect of using the poisoned dart is actually quite good as the death of an enemy can cause terror debuff to the enemies in the nearby area, putting you at a lower risk of being attacked.

The second dart is known as the hallucination dart which you cannot make use of right away. After the successful completion of the “Ghost From The Past” quest, you have to pay a visit to Yuriko and then complete the quest named “The Proud Do Not Endure.“

This type of dart has the ability to turn your enemies against each other due to its hallucinatory ingredients. If you are planning on attacking a larger enemy, making use of this dart will improve your chances of winning the battle.

As you are unable to restock your used darts from in-game merchants or find them in loot resulting from enemy eliminations, there is only one way you can replenish your darts, and that is to go out in the wild and search for them in the form of flowers.

It is important not to get both confused as that can put you at risk while fighting enemies, so, remember that the purple flowers are for poison darts and the orange flowers are for hallucination darts.

Regardless of which dart you decide to look for, Jin has the ability to automatically craft darts if the right flowers were harvested. Moreover, darts is the only type of ammo that you can get through the crafting ability.

So, where do you find the orange and purple flowers for darts? As long as you are not in the area where you got the Blowgun, you can find both types of flowers across all regions of Tsushimam, particularly across any pampas grass fields.