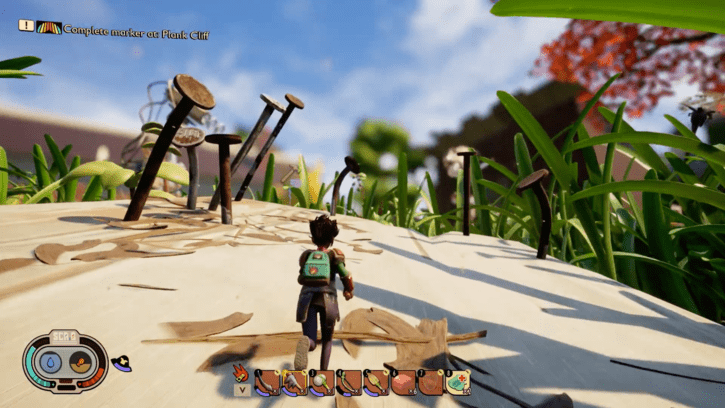 Struggling with completing the Plank Cliff exploration quest given by the friendly BURG.L robot? There is nothing to worry about as in today’s article, we will show you exactly where to find the marker, what you require to complete it as well as what you get from completing it.

If you are having struggles with completing any of the other explorer markers, here are the articles for some of the locations that we have covered so far.

The Plank Cliff explorer marker is located slightly south from the center of the Garden. Please refer to the map above to find exactly where the explorer marker is. Once you get close to the marker on the map, look out for a big white plank of wood that is coming out of the ground.

Then, jump on it and head over to the very end on the opposite end of the plank. There, you will find the flag that you need to interact with.

Note: We’d like to warn you that in that area there are a lot of bugs, particularly aggressive spiders that can easily kill you if you are unprepared or push you off the cliff, which will lead to your death. So, make sure that you come prepared and always keep an eye out for enemies.

How to Complete Plank Cliff Quest

Once you reach to the end of the wooden plank, look out for a transparent sign that is pinned to the floor. Then, get close to it and interact with the sign. This will complete the quest for you. However, before you head over on yet another exploration missions, don’t forget the ingredients that the quest requires from you.

Just like the Bird Bath Bluff quest, you will need:

Sprig can be obtained from pretty much anywhere in the garden especially green grass areas and around the oak tree. It has thin green stems with curly leaves on the top and is pretty much the same size as your character. Plant fibre too are extremely common around the entire map. They are small leafy sprouts that grow from the ground. Finally, the Clover Leaf can most commonly be found in the center, north, and east sides of the garden. You can spot them quite easily as they have three clover leaves on the top of a thin green stem. The only difference to the other three plants is that for this one, you will need to craft an axe in order to cut one down.

What Do You Get Out of the Plank Cliff Quest

Once you interact with the sign and complete the Plank Cliff quest, as a result, you will get some Raw Science which you can then use to unlock a range of different crafting recipes. This will allow you to craft better and more powerful equipment.

So, be sure to check out on the BURG.L robot on a daily basis as he will give you plenty of missions that you can complete in return for some valuable in-game currency.

Beyond Raw Science, completing such exploration locations in Grounded will give you a reason to go to certain places of the map and familiarise yourself with the area. In the end, who knows, you might really like the region for its resources or views and relocate.